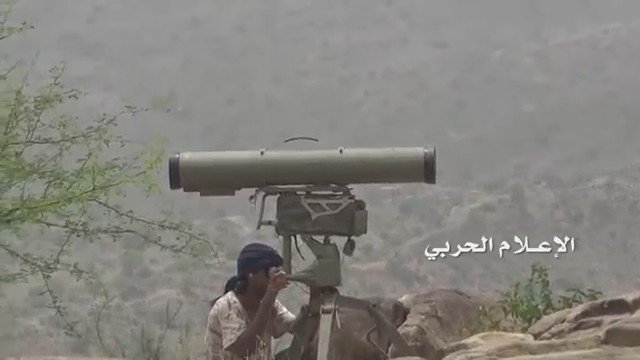 The tank hunters also used ATGMs to target 9 gatherings of Saudi-led coalition personnel and Saudi-backed Yemeni fighters. Dozens of fighters were killed and injured in these ATGM strikes, according to the pro-Houthis news TV channel.

Over the last three months, the Houthis’ usage of ATGMs has increased dramatically. According to the Saudi-led coalition, Houthi fighters unusually use the Iranian-made copies of highly effective anti-tank systems, such as the Soviet-made Konkurs, the Russian-made Kornet and the US-made TOW and M47 Dragon.

These anti-tanks systems are smuggled all the way from Iran to the Yemeni port of al-Hudaydah which is under the control of the Houthis. The ongoing attack of the Saudi-led coalition along the western Yemeni coast is aimed at capturing this key port in order to cut the Houthis’ supply line.

Very proud of you Houthis, keep up the good work :}

Kudos to Iran for supplying the Houthis with viable weapons exacting a heavy toll on the Saudi led coalition. Iranian expertise in rocketry and reverse engineering of sophisticated weapons will provide the Houthis with a steady stream of effective weapons.

How many tanks and armored vehicles are left for the Saudi coalition? They do not have unlimited supply too.

Military leadership of the Saudi forces must be terrible. Didn’t the USA provide any military advisors? =)

as
Reply to  Jan Tjarks

Saudi and Emirate army were an army built by lazy silver spoonfed bureaucrats. So bad that their advisor conceded that they’re not trainable and much more faster to use mercenaries rather than reform them.

Ten roaming anti-tank teams each scoring one every three days – why not? In the last month the coalition has been attacking Houdeidah, so the encounters have been intense.

I did not say the main combat tank, I said, military pieces. 85 in the last month, one half of that rate for all the other months of the 39 months gives about 1,700 destroyed pieces of military equipment. I would be indescribably happy that the figure was five times higher, but there is still exaggeration here.

Atgms good for lots of operations. Saw that in syria as well.

The main reason for the coalition of cowards’ push along the Red Sea coast- ATGMs are small enough to be carried by fishing boats and unloaded anywhere along the coast, not just in Hudaidah. Congrats to Iran and the Houthis.

What a nice lie inserted in this article , since yemen have been blockaded by US and allied naval vessels.. it is always this disinformation that trying to potray iran as active participant in yemen by either supplying or training.

Yemen are awash with weapons before the war and it is now used for the good cause. Iran do not need to supply a single bullet to yemenis..

what about additional FACT that Saudi and Gulf nations have been supplying great amount of weapons and ammunitions to the yemenis ? since there’s so many abandoned saudi weapons/ammunition left for the yemenis to use against the invaders ?

as
Reply to  SurfaceBook

Much of the weapon supplies Houthis uses were captured supplies from their multiple successful raids into the Saudi coalition supply line. Just like Palestinian meager resistance they just had to blame them for being too resourceful.

I posted the same as you read the article and then automatically responded before reading what you wrote. :-)

too many article in the media woving real facts with lies inside it , to justify their propaganda narrative they insert lies in a factually correct news fact..

I don’t know how much support they are giving, but Iran is definitely providing something to them despite the blockade. Iran has been capable of supplying Hezbollah and Hamas back in the day despite the entire region and Western powers having issues with this. Iran has ways around these blockades. It’s definitely not as much as the West and Saudis are claiming, but Iran and Hezbollah are for sure providing aid to the AnsarAllah.

it would be hilarious if the MSM report that the sea blockade of yemen by US naval assets and their allies , easily broken by iranian smugglers..

that would be funny.

yea imagine mattis or trump boast about the effectiveness of US naval blockade on yemen and in the same breath condemn iranian weapon smuggling avoiding the mighty US navy and satellites..

US govt and their media apparatus been lying for so long they do not realize how stupid and silly their comments and propagandas when seen with objective perspective..

And israeli media (read : all western MSM) freqently mocks arabs saying “arabs always lost wars” , while trying to hide the fact that IDF lost then lebanon war 2006 that even the israeli govt admits..

remember the israeli naval commando raid in Ansariya village , lebanon in the 90s ? they got lured into ambush zone and whole team slaughtered by hezbollah in a prepared minefield , only one naval commando escaped by helicopter.. a pitiful display of cowardice and ineptness and yet it is almost buried from public knowledge..

And if Iran is then I don’t have a problem with that. Someone needs to help the Yemen people to ovecome those that are trying to destabilise the country. It seems that when it is the US is found to be giving weapons to factions opposed to the the Assad government, which is the legitimately elected president and well respected and liked by the Syrian people, this is considered helping for the good. BUT if it is Iran giving weapons to the Yemen people to help them defeat armies that have invaded them and also to rid the country of foreign proxy forces , then the Iranian government is seen as a supporter of terrorism. The hypocrisy of this statement by the US makes me laugh and cry at the same time.

You lie. Smugglers are active and through Oman pour lot of weapons.

everyone , wise gandalf , smaug, velociraptor , joe dirt are part of the hasbara team tasked to distract comment section on this website. Please help keep comment section clean from these hasbaras by downvoting them and report all their posts as spam..

And that’s awesome news. Good to hear weapons are been smuggled in to help the Yemens. And so it should be that way too. They need all the help they can get to get rid of the Saudi’s and it’s foreign backed mercenaries. Bring it on! The Houthis are certainly giving the invading forces a good run for their money. Hahaha

“These anti-tanks systems are smuggled all the way from Iran to the Yemeni port of al-Hudaydah which is under the control of the Houthis.“

This is absolute bullshit and SF does well not to just copy and paste. Yemen is a free country under attack exactly the same way Syria is only in Yemen case, they use their names and not hiding behind proxies, as they almost run out of them, as well new names.

I would suggest to the SArabians as well their allies to invest in hospital units, for the wounded mercenaries of them, this way they turn their suffering, into profit.

these houthis are my role model! you can’t get enough of these guys. pure undiluted beasts, ruthless and fearless! extremely tactful and crafty. the Saudis are in deep shit!