On August 1, the Houthis struck a military parade in the southern Yemeni city of Aden killing and injuring dozens of Saudi-led coalition personnel, including senior commanders.

Brig. Gen. Yahya Sari, a spokesman for the Houthis, said that the military parade was targeted with a Qasef-2K suicide unmanned aerial vehicle (UAV) and a new tactical ballistic missile that has not been revealed, yet.

“They were preparing through this military parade, that was targeted in Aden, to advance towards the positions of the army and the popular committees [official term for Houthis forces] in the provinces of Dali’ and Taiz,” the spokesman said.

Saudi sources acknowledged that a ballistic missile launched by the Houthis hit the parade’s main podium. However, they claimed that a vehicle-borne improvised explosive device (VBIED) also exploded in a nearby Police station.

According to the al-Arabiya TV, more than 40 people were killed as a result of the attack. Commander of the Support and Backup Forces, Brig. Gen. Munir Yafa’i, and other senior Saudi-backed commanders were reportedly among the casualties. 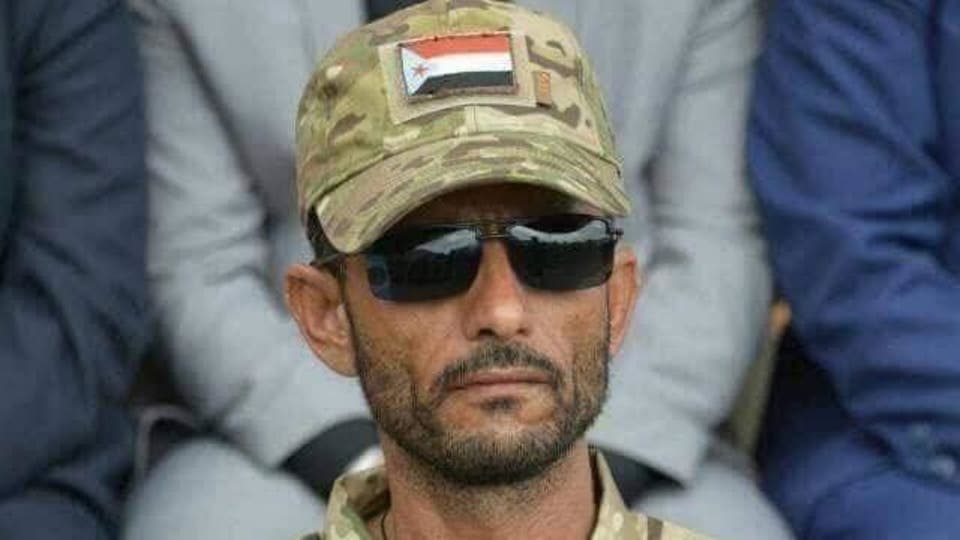 Last January, dozens of Saudi-backed fighters and commanders were killed or injured in a similar attack on a military parade in Aden. Back then, the Saudi-led coalition responded with intense airstrikes on Houthi-held areas.

The new attack, which will likely lead to a new escalation in Yemen, is yet another testimony to the Houthis’ growing offensive capabilities. 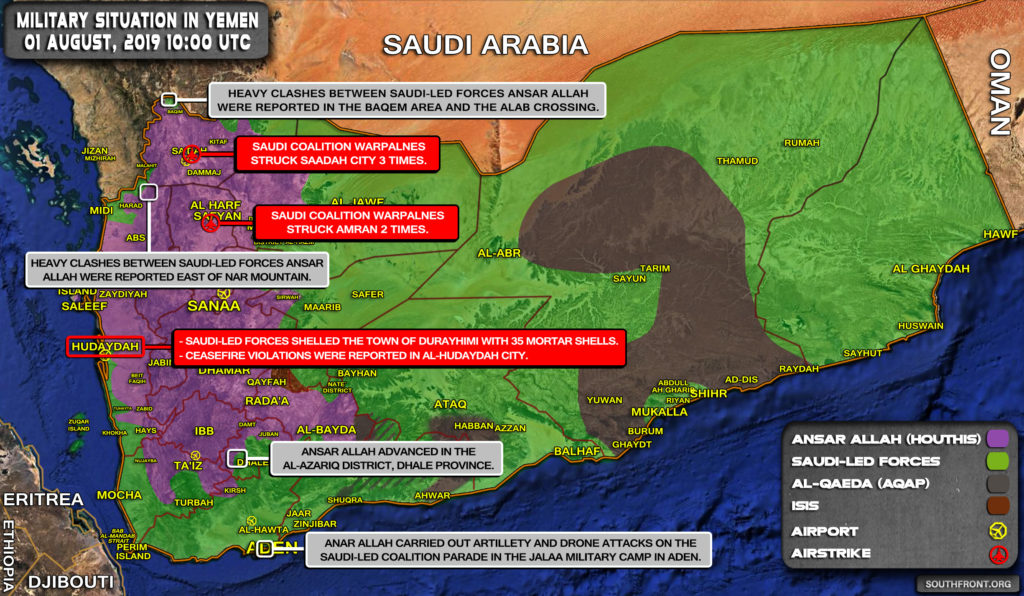 Ahahaha military parade in war zone. Like if Houthis were asked to officiate at the wedding.

You have to take your hat off for Saudi fuckwits absolute stupidity. Seriously, even retards would not hold a military parade in a war zone totally controlled by their battle tested enemies who have inflicted humiliating defeat after defeat. Even total morons would have learnt not to fuck with the AnsarAllah and their Yemeni military allies. The Saudis were holding an open air parade with a VIP viewing stand ROFLMAO…………………you can’t even make this stuff up ………..

There is a reason why the Coalition, now minus the UAE, have won the Nobel Prize for Incompetence three years in a row.

Yes, I hear many of them are now at Disneyland.

Either there or Ronald McDonald’s Playhouse.

Well done! Even better, news came in that Yemen attacked Dammam, KSA with a new ballistic missile. Dammam is located on the shores of the Persian Gulf, north-west of Bahrain. Distance? More than 1,200km from Sa’ada. It seems they used at least one UAV along the ballistic missile. This scares the hell out of Emiratis as well.

Holy shit thats alot of pipes! Seems every second or third place is a pipe yard, so youre correct in what you said , an industrial city.

What would the yeminis target? There an air defence base( useless) or the king whatever military city just next to industrial area #2.

What other targets would there be?

Just wait a few more months and all of Saudi scum will be hit. These daily precision missile and drone strikes are just the appetizer.

Still the actual target is not revealed, just said they hit Dammam with a new ballistic missile. So we need more information. There’s no shortage of targets in Dammam or areas close to it: King-what’s-his-name base as you mentioned, King-what’s-his-face int’l airport, Dhahran int’l airport, Dammam Harbour, oil terminals, oilfields, pumping stations, etc. Bahrain is at spitting distance of less than 30km to the E-SE with it’s 5th fleet HQ and air defence. Ra’s Tanurah oil terminal is also on the other side of a small bay to the north, about 20 km and Qatif is in between, right next to Dammam.

Al-Jubail is further to the north at a distance which is greater than to say the target is Dammam.

Nothing hurts Saudis more than disruption of oil flow, so I’m going to guess that the pipeline and pumping stations are the targets. I’m not sure they even need to knock the air defence out first. It’s useless either way. They tried to spin Yemeni attacks on Jaddah and Yanbu’ (the end point of trans-Arabia pipeline) as an attack on the holy city of Mecca. They can’t do the same with attack on this side but they will tell their own lies about Yemeni attack on civilians. Anyway the danger of Patriot missiles is much greater for civilians (Israeli or Saudi) than any attack by Yemenis or 45 minutes of slow flight by “unknown UAVs, probably a crude Khizballa copy of the cheap inferior Iranian one, whose plans were stolen from sophisticated US ScanEagle that wasn’t captured by Iran”.

Edit: Another explosion and fire in another US refinery yesterday. Curious.

Saudi shithole is a draconian police state and even a smart phone video of the damage would lead to beheading. The Americunt arseholes are now manning all the patriot batteries around Riyadh, Jeddah, Tabuk and other shitholes, but so far have achieved fuckall. The Saudi morons are in a real jam.

LOL kings whats his.face!!! He was the greatest of them all.

Thank you for the great posts today, I forgot to mention that.

Jews have infected Russian politics and decision making. Ideally, Russia should have acted after the IL-20 was downed. Since then Putin has invited the ugly Zionist pig Nutter Yahoo six times to Moscow.

Truly amazing!!! Houthis you are by far the most battle hardened and deadliest fighting force on the planet

BE712
Reply to  Assad must stay (gr8rambino)

Nah… They just got the advantage of the bad terrain and enemies that suck..

Assad must stay (gr8rambino)
Reply to  BE712

Oh yea? And which army is more battle hardened and deadlier than them? Besides SAA

Assad must stay (gr8rambino)
Reply to  BE712

I’d like to see you go over there and help them fight, bet you wouldn’t last a day

The Saudis are complete fuckwits, in the course of my over 30 year military career, I have never some across such retards. They invaded Yemen a poor peaceful nation which posed no threat, tried to install a puppet regime stirring a vipers pit dating back to the Queen of Sheba, killed thousands of women and children after suffering sheer military defeat despite total support from Americunts, Zionist scum, British faggots and French poofters. The Saudi “intelligence” is lower than feces, what kind of a military would hold an open air military parade of a puppet regime, knowing full well the remarkable courage and capability of the Ansarallah and Yemeni military, which has now almost unlimited access to modern weaponry including precision missiles, armed drones and air intel assets. The sheer fact that the Ansarallah knew the exact location, time and participants speaks volumes about their ground HUMINT capability. The Ansarallah followed their Borkan 2H missile attack with multiple drone strikes that wiped out the whole VIP section and the pathetic pimp looking Hadi puppets. The UAE cowards were smarter, they saw the handwriting on the wall and pissed off. The Saudis are in for real hell now as thousands of very skilled Shia and Sunni diaspora are now fighting in Yemen alongside Ansarallah, including large number of PFLP, Hamas and other Palestinian groups along with Axis of Resistance allies.

Just one? C’mon, two or three at least!

Some of us predicted back in March 2015 that Yemen would quickly turn into the Saudis’ Vietnam. We were right. The Yemenis will never surrender.

Yemenis like Afghans just don’t cotton to brutal foreign invaders occupying their lands. The Yemeni tribes are warlike by nature dating back to the Queen of Sheba. The dumb Egyptians in the 60’s faced a similar quagmire despite committing horrible atrocities, including using gas and toxins. Egypt lost 60,000 dead and wounded and totally suffered a humiliating defeat. The Saudis are facing a much worse defeat as the majority Zaidi Shia are fighting for their land and are much better armed.

Why not Riadh, the palace?