The Houthis, formally known as Ansar Allah, announced on January 6 that their Air Defense Force had shot down a combat drone of the Saudi-led coalition.

In a statement, Brig. Gen. Yahya Sari, a spokesman for the Houthis, said that the drone, a Turkish-made Karayel, was shot down with a ground-to-air missile while it was carrying out “hostilities” over the northern Yemeni province of al-Jawf.

“The targeting and downing [of the drone] were documented by the military media,” the spokesman added.

The Karayel was developed by Turkey’s Vestel to carry out surveillance, reconnaissance and combat missions. The drone has an endurance of up to 20 hours and an operating range of 150 km. The drone can be armed with guided munitions like the Turkish-made MAM-L and MAM-C.

Last year, Saudi Arabia signed a deal with Vestel to create a joint-venture that would produce 46 Karayel drones over the next 5 years for the Saudi forces. 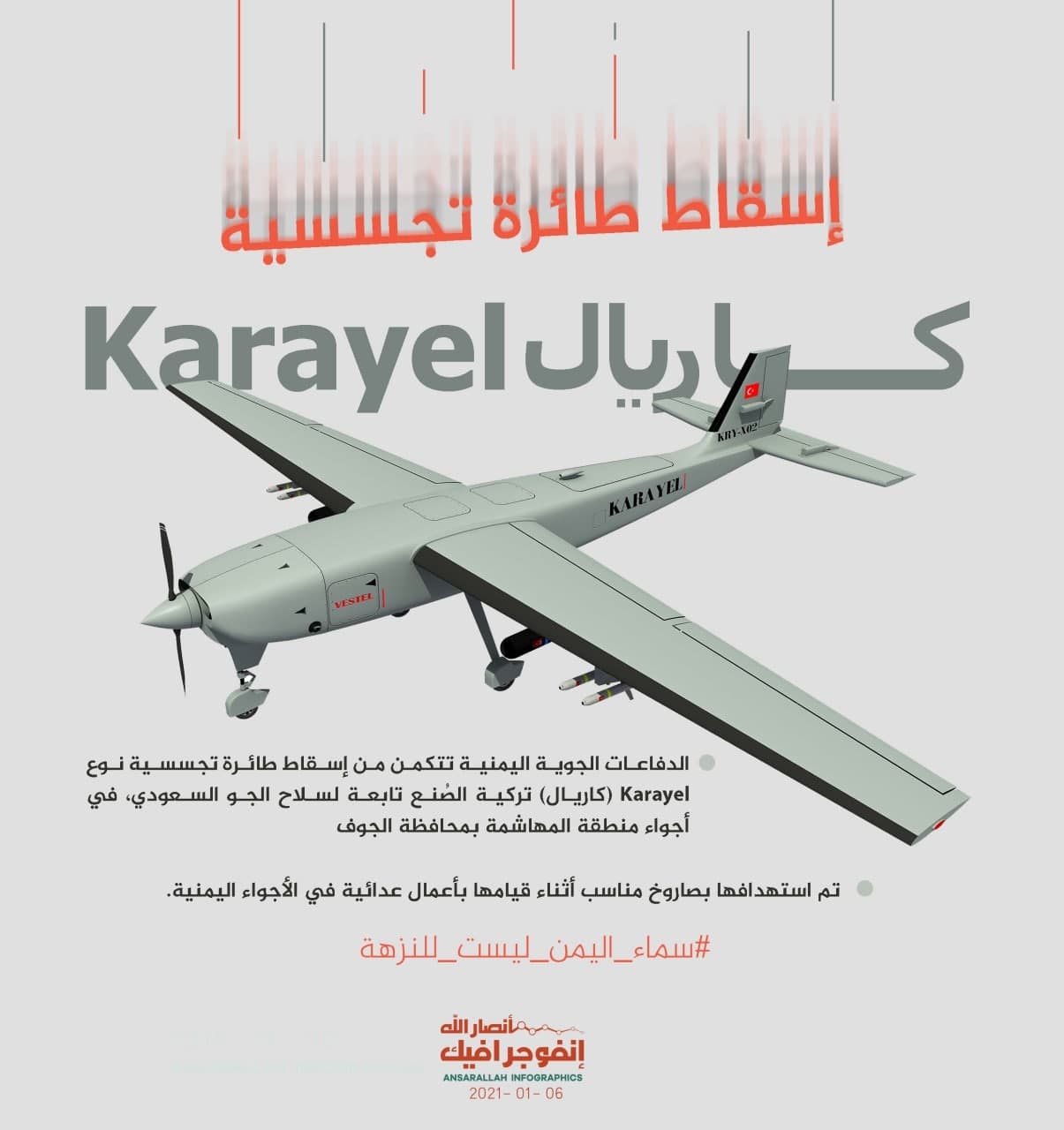 An official poster with the Houthi’s statement.

The Houthis didn’t provide any details about the missile used to down the Karayel. The group operates some upgraded Soviet air-defense systems as well as air-to-air missiles which had been modified to be launched from ground.

Last month, the Houthis shot down a Chinese-made CH-4 combat drone of the Saudi-led coalition over Ma’rib. These incidents demonstrate the Yemeni group’s growing air-defense capabilities.

The Houthis always burst BS bubbles about the US and Turkish weaponry. Erdo should send some Islamic mercenaries to Yemen to see their ineptitude and incompetence, alongside with the Saudi mercenaries.

we are not in Armenia obviously… Turk drone is just flying target for Ansar Allah.

Yeah, they have tech from Iran not from Russia.

Its not what they have but how they use it. By the way Iranian tech is based on Russian and Chinese tech. They are behind in tech level.

Indeed Russia is way behind Iran and China in drone tech.

Ahead* Russia already has heavy combat drones/loyal wingman. Su-57 is being equipped with a pilot less drone mode too. Aside from that they have medium drones similar to the Predator and light and micro drones. Also lets not forget Russia was the first to use supersonic drones in the 60s.

And let’s not forget we are in 2021 and Russia is far behind in drones tech.

Tell them to stop their drone programs cause they are too rich for that.

I thought that thermal and IR are for jets.

They have modified it and can launch R-27 from Ground!

IR/thermal should follow the heat of a jet. This drone is not a jet.

Please use your bacon Brain….the R-27 once have been launched has a IR seeker which floow the heat sign of the jets…thats modified system have been able to shot down some Drones,Tornado and F-16 jets in Yemen…also the Bombardier jet that was shot down 130km southwest from Kabul…

How IR finds a small drone without jet engine?

From what I know you can’t. They are made to find the engine heat.

thats because engine has a huge IR firm..but it doesnt mean that a missile launched at a drone with this kind of missile cannot hit drones…the proof is ( using your bacon brain) that this Turkish drone have been shot down with a R-27 or Manpads both with IR guidance.

And where is the proof?

No, you said you have prove that it was shot down with a IR missile.

I have seen the image and it was a IR missile..surely Manpads SA-24…other images of a Tornado and F-15 probed that those planes have been hit by R-27…you know the difference?..I will tell you as a former air force servicemen of a NATO country deployed in a air force HQ!…a misile guided by radar ( active or semiactive radar homing) follow a direct path when are going to hit the target…while a missile guided by IR are doing movements when are near to the target seeking the “hottest” area .

This is unfair, there was obviously betrayal, but yea even the Houthis can shoot it down from the sand

I know that sounds unfair, but it was unfair also for those dead Armenians… who were betrayed, to be scarified for US-NATO interests.

Karayel was not even used in Nagorno-Karabakh it is an old school drone. TB2 and TB2s and some of the others futuristic drones KSA doesn’t have it. While the Chinese drones are not good nor good for the modern era wars.

The Houthi terrorist groups have shitty air-defense capabilities they get aerial bombarded on daily basis. It won’t either last there perhaps they could hold on for couple of more years but eventually they will get overwhelmed

but eventually they will get overwhelmed !!!

you have no idea what you are talking about…………i will give you a little hint….

check the geography of jemen……..if you think afghanistan has a shitty terrain for warefare when it comes to heavy equipment…..jemen is the pure nightmare for any army with heavy equipment…….they will constantly have to have travel through valleys and mountanus terrains if travel is possible at all……the numerous, hundreds, thousands of combat zones, are spread over 1000ś square kilometers with a TOTAL lack of any infrastructure………..

a focused, commited, defender such as the houthis, will beat down any..ANY OPPONENT in those conditions……could be the marines or the whole of nato…..

check the SF videos of the numerous “battles” in jemen where the houthis kick ass….

The total lack of any infrastructure in those mountanous terrains, makes an invasion / defending of occupied territory close to impossible……and the saudis are loosing on a daily basis, man after man, meter after meter…and when marib falls in febuary…..the saudis are defacto kicked out of the country. Add to that the differences between saudis and uae, bombing of aden by UAE supported forces……..done deal for the house of saud in jemen…….they went allin and got busted!

Well the Mountainous will also come to bite you in the back as it is locals vs locals. Hadi’s government + the southern separatis vs Houthis. Forget about foreign troops it’s local boys vs local boys.

What’s so futuristic about a propeller aircraft?

Had Armenia used its air force it would shoot those out of the sky in a matter of hours.

Get real, TB2 isnt even on par with Chinese drones. TB2 (not the updated version) still uses RF command and severely limits their range. Only recently they upgrade it to satellite command.

One has to feel sorry for the poor Saudis (I’m joking), incompetence coupled with arrogance. Nothing they do goes right for them.

Starting to think these are Turkish controlled drones, now that they restored relations with Saudi Houthis must strike Turksom base in Somalia if they intervene in the war like the Gulf states

That’s very bizarre, Turkey has typically been supportive of the Houthis, as both are against Saudi Arabia. Not only that, but Iran and Turkey are both aligned in the same direction regarding Yemen, which was previously reported on SouthFront. Both countries provide Yemen with humanitarian aid, and Turkish humanitarian groups have been repeatedly persecuted by Saudi Arabia.

I think Saudi Arabia got this Turkish-made drone from a third party (like the USA or Israel), or this is a drone from a Turkish private company.

Vestel is an old Turkish private company owned by Zorlu Group They have a liberalist view, I have no idea about their political opinions They are known for selling white appliances I’m surprised to see them in the arms industry Looks like an ordinary trade deal but it would be better if they did it with Houthis instead of Saudi invaders

Ah, I see now. Interesting, thanks for explaining to me. SouthFront didn’t make this clear, and knowing about the Turkey-Saudi conflict, and how Turkey is on the same side as Iran for Yemen, this article didn’t make much sense at first.

Change your nick name to turkogyftos

Reports of Saudi and Turkish relationship improving are true then, it’s a shame that all of these rich “powerful” US allied countries gang up against these poorly equipped farmers and still getting their asses handed to them .

Not really, Vestrel drones were sold to saudis in 2015. Before the coup against Erdogan was unleashed.