Brig. Gen. Yahya Sari, a spokesman for the Houthis (Ansar Allah), revealed on September 18 new details about the Abqaiq-Khurais attack.

In a conference, the spokesman stressed once again that the attack on oil facilities in the Saudi areas of Abqaiq and Khurais was carried out by the Yemeni group, showing an aerial image of Abqaiq plant that was supposedly taken by the group’s intelligence before the attack.

The Houthis’ image on the right side.

Brig. Yahya Sari went on to accuse the U.S. of attempting to play down the results of the operation and manipulating the facts. 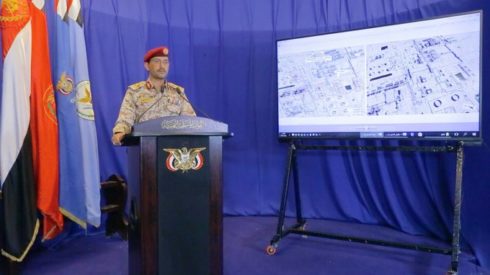 The spokesman said that other UAVs were used as decoys to distract and jam Saudi air-defense systems and radars.

The Samad-3 UAV was revealed during the recent Martyr Saleh al-Samad Exhibition for Yemeni Military Industries. However, Qasef-3 and the mysterious jet-powered UAVs have not been presented, so far.

Brig. Yahya Sari concluded his conference with a threat to the UAE, saying that the Houthis’ Air Force and Missile Force could target Abu Dhabi or Dubai at any give moment.

The Houthis conference appears to be a response to an earlier press conference held by the Saudi Ministry of Defence. The ministry showcased debris of missiles and drones used in Abqaiq-Khurais attack, claiming that they were not launched from Yemen.

“We assure you today that the destruction of the targeted facilities is far greater than what was acknowledged … The American tried to publish fabricated pictures of the aftermath of the operation as part of its attempts to minimize it,” Meaning the damage done to stabilization towers in left rectangle. No close-ups provided for that area.

How could Abqaiq have been hit at all? It’s protected by a Patriot site, three Skyguards and even a crazy French Crotale system! Except that all of them are pretty worthless against drones and cruise missiles. Oh yeah… and the sites were pretty much empty during the attack. Theoretically, that could have had an impact on effectiveness.

So now you follow Twitter news? The middle block appears to be freshly plowed farmland. I am surprised these photos could be taken at 4 AM. :)

It’s hard for me to keep up the evidence-shredding after a fifth of Jack Daniels, prescription opioids and hours of vaping transmission fluid. Once my brain stem shuts down, I use Twitter as my thinking crutch.

US government ‘enhanced’ PlanetLabs imagery of damage is a rather sloppy job too. We know which direction the winds were over both sites all night – they were from the northeast. And it was never in the direction the burn scar/soot trails from the towers appears in the images. That could only happen as pictured if the wind was from the northwest. Unless we’re to believe that a little drone (or 20) managed to blow several tons of crude out to the southeast, ‘proving’ it was an attack from the northwest. Maybe the Saudis will claiming cruise missiles hit them. They keep changing their mind about what specifically hit Abqaiq and Khurais.

The pictures may be shot from an angle from the west Pictures from towers do look strange, I am guessing it is smoke of emergency burn off.

Houthis have restored my faith..

Yup, the shoah must go on, right, and for the love of God, if their claims, lets just specualte a bit for the sake of their arguments, “if” Iran did it, that alone would makes the situation for the acusers aka Moronikans/Saudi-barbarians de facto much worse, not better for the Saudi-barbarians and the Moronikans, since this uh….. Iranian cruice missiles and eh…. drones would have to pass by an region packed to the brim with everything from the 5 fleet to CENTCOM, radars, michrowave, and uh…laser somethings etc, to lord knows what they claim they have and what this ” tings” can do and so on, and they didnt see squat, did they, nor have managed to craf up anything, not even faked videos, nothing, and stil they insist Iran must have done this, hehe, no wounder Putin trolled them, har, har, har. The Russians must be laughing their asses off this days. This is an classic case of creating an self inflicted cluster f… of biblical proportions, self mutilation indeed, and then this farse come riding into the arena.

And it seems that the Houtis where telling us the truth all the way, and of course, have several launching sites and even some inside Saudi territory witch makes the claims more credible, not that I doubted it, but the numbers of Missiles and drones makes the calm truthfull, unlike the idiotic farse the Saudi-barbarians put up on display, and this drones and missile parts is/are even irrelevant, they can be from anywhere and the overall design dont diviate that much from what everybody uses this days, witch is more depending on what you attach to them than anything else. And also to have in the back of your head the distances involved. Everything makes perfect sense. And I know now for certain that this images we have been seeing the last days, areal high altitue images of the compound are fake, and I guess the damages done are probably much greater than whats been admitted. The second issue is what the f…. is the Moronkians dumping on the Saudi-barbarians, huh, do their shit even work., huh, since the level of noice is increasing day by day. The Saudi-barbarians dont even admit nor shows us anything even remotely close to facts, as we all know its an lie anyway, that Iran did it, highly lightly, yup, sounds credible, right.

But the intital problem is the Moronikans, and their vassals, whom despite this PR-farse/freak show, witch tells me nothing, do notice on one of the tables, the date say 14 of May, 2019, witch means what, etc, and the Moronikan officials stil want war, that is what this farse is about, they lie, of course they do that, we all know it, but do that hinder the sickos to continue this farse, since Trumpstein the cnuckle dragger from NY witch is by an miracle able to speak out despite having His head up King Bibis ass, want an war, witch QEs infitium kicked on track again, they need something, anything, to distract the world from the insanity of their economy. Yup, whats next, huh, when this farse is over, in Norway HarsbaRats have taken over and the JudenPress runs Iran did it with an etusiasm I havent found since Russians where “taken” ( the s/wada nutt case) in doping. Yeah, and usess CNN as Dha prof. What could possibly go worng.

The third, dunka, dunka, (my head on the table) is the rethoric, ugh….. if I drive an Jap car, drives down an pedestrian, and can they/I then blame the Japans for that, uh, acsident, since the car is made in Japan, yup, you have to be somewhere around an complet idiot to make that, and displays an IQ around the room temprature range, to be the case, but then again, we are talkin about Moronikans and the cocke snorting Saudi-barbarians, hell yeah, everything goes, right, wankees have an loooong track record of telling us all about their “facts & profs” dont they.

May the Lord continue to bless the Yemen people in their rightfull fight against the scums of this earth.

Iran is a military Heavyweight. That’s why it’s less insulting for them to say Iran did it. For a heavyweight to hit a heavyweight (I refer to the USA not Saudi obviously as USA has a stake in Aramco facilities so this is an attack on them as well).

But for an economic and technological featherweight (in USA Saudi eyes) to crack a heavyweight in the jaw and hurt them, which is what the Houthis have done to the USA and Saudi Arabia, is too embarrassing.

So they blame Iran.

Believe me, Iran had nothing to do it with it, if it had it would have used far more lethal ordinance than mere 10 drones. This was a 100% Yemeni operation and a very successful one as it exposed the sheer impotence of Americunt hype weapons.

Indeed, the Russians ARE laughing their asses of… During the recent Astana process tripartite meeting in Turkey, Putin quoted Surat Ali ‘Imran [v. 103 – MBS, stop fighting your Muslim brothers, Allah forbids it], then added that S. Arabia would be well advised to buy Russia’s S-400 – and even the S-300 would provide better protection for their infrastructure [implying better than the Patriot…] https://www.youtube.com/watch?v=TCzoV-x-0qQ https://www.youtube.com/watch?v=EVG02gfD6lg

“Information about this is actively disseminated by Syrian journalists referring to a certain military source in the country, and, according to recent data, Iran is ready to supply its air defense systems to the Arab Republic at a special cost, but provided that these air defense systems will not depend on Russia,” the publication said.

The publication added that the Iranian air defense system shares similar characteristics to the Russian S-300, which should limit the amount of training time needed to use it.

Syria first acquired the S-300 last October when the Russian Federation made their first delivery of this air defense system.

Russia’s decision to supply Syria with the S-300 came just days after their IL-80 was accidentally shot down by the Syrian air defenses off the coast of Latakia when Israeli pilot used the Russian craft as a human shild.

Russia called out Israel for the incident, stating that an Israeli Air Force F-16 used the IL-80 for cover during their exchange with the Syrian S-200.

You can call me Al
Reply to  Kandinski

Put the title on the picture or the link where you got that from – please, so that people understand.

I suggest a site called South Front. Scroll down the July 7th article a bit to find the treasure you seek.

Here friend, I provide another link with not only pictures but a video of the Houthis walking around the ‘delta wing UAV’. https://southfront.org/missiles-and-drones-a-close-look-at-houthis-new-weapons/

Kandinski
Reply to  You can call me Al

You have a link for this in this very article :.) It has video too.

Well done Ansarallah, message delivered and quite understood. Next time there will be more than 10 drones if the Saudi scum don’t leave Yemen.

The Houthis got the message across loud and clear and the Saudis need to leave Yemen or face worse attacks.