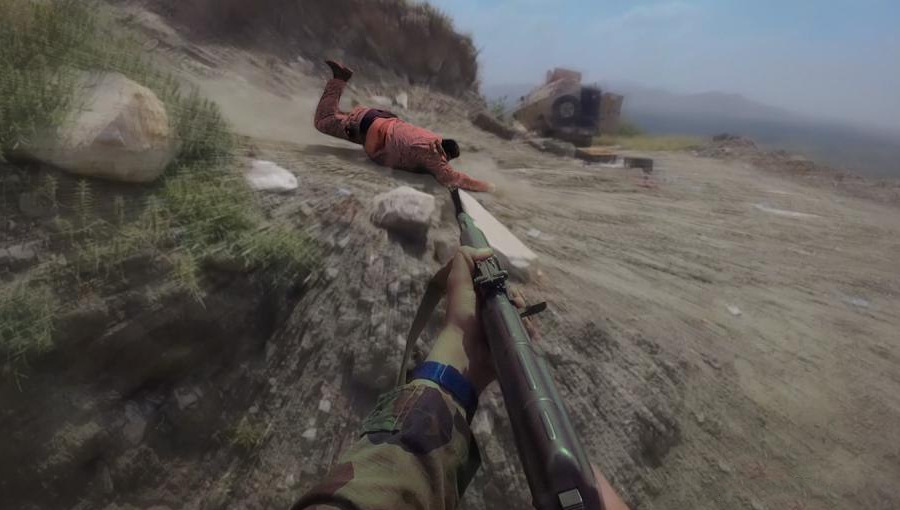 On May 29, the Houthis (Ansar Allah) released combat footage from a recent large-scale ground operation inside the southern Saudi province of Jizan.

During the operation, Houthi fighters crossed the border into Jizan then stormed a number of Saudi military position without facing any real resistance. The positions were manned by Saudi and Sudanese soldiers as well as Saudi-backed Yemeni fighters.

The Houthis also ambushed reinforcements of the Saudi military and managed to reach the outskirts of the town of al-Khobh, 3 kilometers inside Saudi Arabia.

“The large-scale operation in Jizan was carried out on the axis of al-Khobh-Wadi Jarah, from 3 main directions: Jabal MBC, Tabab al-Fakhida and al-Taba al-Bayda, al-Qabboura and al-Amoud, Tuwaiq as well as East Qaim Sayyab,” a Yemeni military source told the pro-Houthis al-Masirah TV. “During the operation, all the targeted Saudi positions were stormed and captured, heavy losses were inflicted on the enemy forces.”

According to the source, more than 80 personnel of the Saudi military, Sudanese military and Yemeni forces were killed or injured in the course of the operation. Many others were captured by Houthi fighters.

The attack was a major blow to the Saudi-led coalition. Six year into the war, the coalition is still incapable of securing the Kingdom’s border.

I hope this ends soon, maybe the houthis will get far enuff they force an end.

Israel is an Apartheid State
Reply to  southfront fan

Maybe when Houthis get 20 km inside of Saudi Arabia.

I hope the houthis will take out the cryptojevv wahabi regime. March on!

Even u and I could easily go an attack and win against the most cowards (L.A)

The Houthis should liberate whole Saudi Arabia from the regime forces.

It’s all over for the fat tyrants

What a bunch of filthy pigs those Saudi rats and affiliated scum!!!! They’ve caused more pollution in pristine desert landscape than who knows what! Eat lead and die!!!

Total heroes! With sandals & AKs running over the enemy. It’s God’s will.

Some of the best battle footage I’ve seen. Saudis are clearly not organized or motivated. Fat guys running away and getting shot after a basic assault of their high ground position. No security (apparently) on their flanks or rear. No unit cohesion on the part of the Saudis as the assault progressed. No stand-off weapon support. No (apparent) air support. Saudis trying to escape willy nilly as if it were Godzilla attacking. They are as bad as their mercenaries. No way in hell the Houthis lose this war.

They actually have great defensive positions yet they run away and of course they are flanked and slaughtered., they are literally killing themselves in panic

Exactly, where are the attack choppers, mortar, artillery, jets, ballistic missles… why are countless APCs MRAPs and Toyotas abandoned in the valleys… looks like the saudis are bad at everything that requires discipline, worse than Saddams army.

Right on. it’s an organizational, communication, and discipline problem. They just don’t have it from the very top. this is a very fragile state. Their only strength is Oil/Money. They are in danger from any state or group with discipline.

It is ‘Saudi-led coalition’ but it is only Saudi Arabia that is getting it’s lazy butt kicked😂😂😂😂😂, but love it!!!

Saudi rats are running back under bin Salman’s skirt

Crazy video. It reminds me of that scene in “300” when Spartans pushing Persians into abyss. Saudis are jumping into abyss by themselves.

Ya I saw it too same scene but the difference is this is real life not reel one. one of the best real life combat videos I haved saw ever with the most cowards the wahhabis (L.A) running as usual hahahahaha bye fools (L.A)

ROFL The fact that the Houthis can push into Saudi Arabia’s territory armed with only light weapons and minimal gear speaks volumes. Every post they’ve overtaken gives them a chance to replenish their supplies. It’s too bad the Houthis can’t push their way into Riyadh.

After watching the video, its clear the #1 weapon supplier of the houthis are the saudis themselves……..LOL

Excellent combat footage. You will NEVER see this type of war coverage of the war in Yemen on any US or lapdog (Australian, British, Canadian) and the little worm vassals in NATO and EU television screens, especially the dead bodies of Saudi and mercenary troops slowly cooking in the Yemeni sun. Those scenes are just too disturbing for the tiny, brainwashed, uninformed, misinformed, feeble minds of the target audiences. The Houthis, as always, replenished their combat capability with a nice amount and selection of captured enemy material: AKs, German G36 rifles, MG3, M2, Minimi machineguns, M72 Light anti-tank Weapons, RPGs, fragmentation and smoke grenades, night vision binoculars, optical devices, ammunition, that big ass 12.7 mm. sniper rifle, etc. That APC burning was a nice sight. The Saudis also better order some more Toyota pick-up trucks. They always burn nicely. Well done!

Totally true. You will never see it on Western MSM news, but US military leadership has to be face-palming over this kind of performance. Undoubtedly it is writ large on the entire conflict. A lot of eyes are rolling and a lot of heads are shaking. At least US Special Ops are on the ground there. I imagine THIER moral is lower than whale shit right now too because they have no indigenous force to work with. If I had to guess, I’d say the Houthis are going to drag the US into this, because the US will not let the KSA go down in flames like it should.

I’d turn these Houthis loose on the kosher scum occupying Palestine. You know the Houthis are itching to bring the Israhellis a world of hurt…they even curse them at every occasion!

That is good news Proud vindoo as this site is not big enough for more than one idiot. I am the boss again.