The Houthis captured several key positions in the area of Mris in the central Yemeni province of Dhale from the Saudi-led coalition and its proxies in the course of a new successful attack on April 10.

In a second video, the Houthis showcase loads of military equipment that they captured in the course of their attack. The equipment included five pick-up trucks, ten motorcycles, assault rifles, sniper rifles, machine guns, rocket-propelled grenade launchers, recoilless guns and loads of ammunition of different calibers.

The Houthis launched a large-scale operation in Dhale earlier this month. So far, the Yemeni rebel group has captured dozens of positions. From its side, the Saudi-led coalition suffered from major loses and appears to be unable to stop the Houthis advance.

Can someone verify the effectiveness of burning tanks and armored vehicles from the inside in disabling them permanently?

Looks like well armored equipment which is designed to withstand a great deal of damage and force.

I guess anything eletronic, electric, everything plastic will be totally destroyed, only the pure metal parts will be left anyway. No way in hell to repair them locally for sure, and likely cheaper for Saudi or UAE to buy new.
So yeah, cost effective way for Houtis to destroy, and they take anything of possible use away before burning. Plus they only use some gasoline to burn them, no future precious ammo needed.

True. During the Great Patriotic War, Russian tank crews would blow up their magazine ammo if their tanks were disabled or ran out of gas to try to keep them from the Germans. I would think that would cause some burning.

It’s a pity that the forces of darkness have the T34’s, I hate to see the old birds used in this manner.

The heat will distort many metal parts too. If the ammo storage has any ammo left the explosions will bend or break parts, particularly the delicate parts needed for motor functions, and render them useless. Gauges and electronics will be destroyed and wires will lose insulation, shorting everything. The battery won’t survive very well either. If the fire gets really fierce it can melt metal locally and jam things permanently. So yes, it is very effective.

Would incapacitate the vehicle – internal electronics and controls, both for tracked movement and fire control system, be destroyed. Depending on intensity of fire – onboard fuel/ ammunition etc – the steel hull would be subject to metal fatigue, weld failure, stress cracking and de-lamination.
With this particular old school tank, if any open-rack stowed live shells inside hull detonated it would result in catastrophic damage, burst welds, turret ring etc. Shame to see these old girls being torched though – and notably first T-34/85 in vid appeared to have three of the four extra range fuel barrels, in their rear flank cage mounts, these were perforated with holes though!

The T34-85’s where in the process of being scrapped out and in storage in Yemen. Doubt they a decent supply of reliable rounds after all this time, last import of used was in 1980. Pix of one being used with a pull cord: 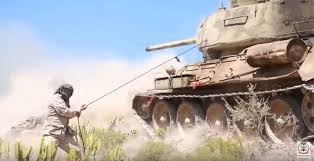 I imagine they don’t use them like regular tanks in tank warfare, but as mobile artillery units.