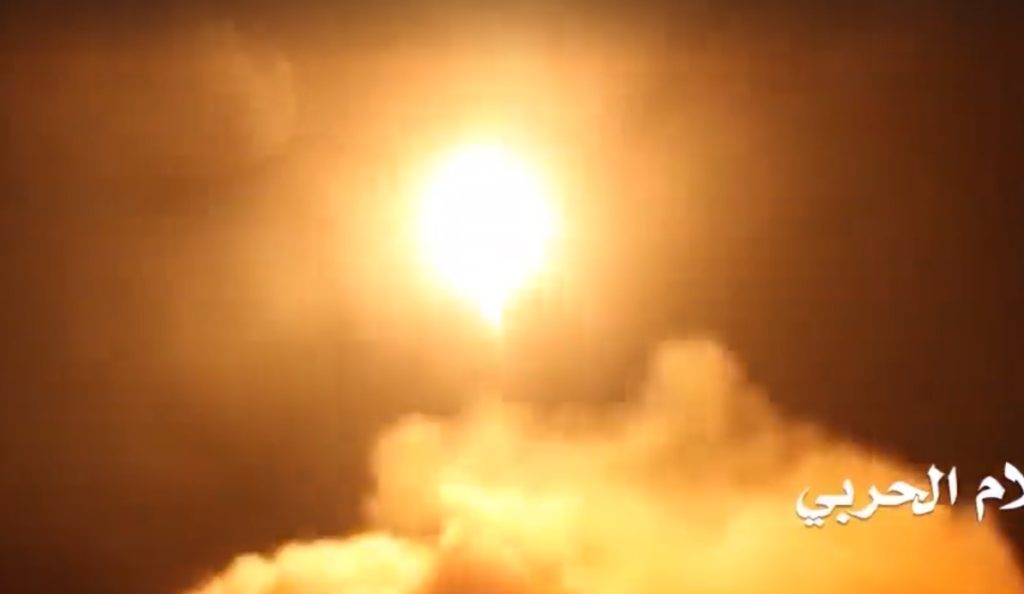 The Houthis have fired a ballistic missile at the Saudi city of Khamis Mushait, about 160km from the Saudi-Yemeni border, the Saudi military said on February 5. According to the report, the missile was launched from the Yemeni province of Sa’adah and then was intercepted by Saudi Arabia’s air force.

Col. Turki Al-Maliki, a spokesman for the Saudi-led coalition, accused the Houthis of targeting civilian objects in Saudi Arabia with ballistic missiles.

The Houthis or media outlets linked to the movement have not yet commented on these claims. Previously, the Houthis had launched their missiles only at important infrastructure or military objects.

Col. Turki Al-Maliki, a spokesman for the Saudi-led coalition, accused the Houthis of targeting civilian objects in Saudi Arabia with ballistic missiles. LOL.. maybe this idiot Col. should just stfu..! I guess now the houtis are saying.. an eye for an eye.. just like 2006 Hezbollah with israhell.. you hit my city ill do the same.. hit my port.., your port will be raze too.. thats when the israhell are forced to ask for seized fire..! It is war after all.. and there are always collateral damages..

Hypocrisy in war and politics? I’m shocked, say it ain’t so?

Methinks these Hothis should stop firing these useless missiles. It’s a waste of resources better spent on fighting the Saudis and their mercenary lapdogs on the ground. Militarily it accomplishes nothing, maybe even the opposite as it gives ammunition to the KSA and their US lap bitch Nikki Haley to froth at the mouth against Iran, and almost every missile either gets intercepted, or hits nothing. As lets face it, it’s useless old tech. Maybe if the Houthis could actually launch a hundred a day they could overwhelm Saudi missile defenses, or hit something of value, but this small scale operation of one missile a day, they might as well have aimed that rocket into the sea. At the very least aim them somewhere more close by, where there are no known Saudi Patriot batteries, so they can actually hit something with them.

But it would be a waste to use their longer range missiles on close targets, wouldn’t it? The problem is that they have only a small number of scuds, so they must have figured that using modified SA-2 missiles would at least force the Saudis to use expensive Patriots to shoot them down.

This shows why the Iranians have a lot of good ballistic missiles. If they didn’t they would be Yemen.

You beat me to it, I had the sentence copied, ready to paste … the hypocrisy beggar’s belief.

I honestly don’t understand why Saudi arabia just don’t declare a full blown military invasion war against them.. Hiring Pakistani and Indonesian army along side to absolutely clean this pocket completely and utterly

They don’t have an army and Pakistan doesn’t want anything to do with this, they said as much. The only mercenaries for hire are Africans, why Indonesians?

The Indonesians are notoriously know for commiting genocide and if you let their army in. Within months they will delete all these houthis

With those two consecutive comments, you apparently call for the genocide of Yemenis, don’t you?

Not that the Saudis’ failure -as long as genocide is concerned- is because the lack of trying.

Absolute rubbish. Mercenaries will never defeat a populist guerrilla force which is fighting for its own land.

They are in the process of a full blown military invasion. But just as when the US had 500,000 troops on the ground in Vietnam, things don’t always go according to plan, not to mention the fact that Saudi Arabia has a pretty useless military, even though it is armed with the latest US military hardware.

Its like turkey swearing revenge for its invaders getting shot. Soft and deluded.

Col. Turki Al-Maliki might need to refresh his knowledge of the Saudi military, since he is (apparently) part of it. Here’s the ‘civilian target’ of Khamis Mushait: https://image.slidesharecdn.com/04ec616d-89ba-458f-bd4a-76220cc5945f-160315042404/95/usmtm-cmd-briefmrpublic-2-10-638.jpg?cb=1458015904 Col. Turki will note that Khamis Mushait is the HQ for Saudi’s Southern Area Command. Regional HQ are probably a legitimate military target. If not, then the King Faisal Military City section or the King Faisal Military Airbase – both within Khamis Mushait, sound kind of like military targets as well.

CENTCOM should be particularly worried about the target – and the US troops stationed there. They’re training/support detachments for the Saudi F-15s, E3s and Patriot batteries. CENTCOM wouldn’t want any aluminum coffins coming back to the states from Saudi Arabia. Imagine how awkward it would be for Gen. Votel to explain how U.S. taxpayer freedom and liberty were being secured by U.S. troops supporting the Saudi-Wahhabi Caliphate military forces and enabling their war of butchery in Yemen. Shouldn’t Votel be protecting us from ISIS/al Qaeda by attacking the Saudi-Wahhabi caliphate and the Saudi oligarchs funding ISIS/al Qaeda in Riyadh? He should be leveling Khamis Mushait, not sending US troops there to fix the Saudi Wahhabi caliphate F-15s and Patriots.