The Houthis launched a new large-scale military operation in the district of Sirwah in the central Yemeni province of Ma’rib on July 3.

Within a few hours, the Yemeni group’s fighters were able to capture several positions, including the strategic area of al-Tabah al-Hamra, from the Saudi-led coalition and its local proxies. In the course of the attack, the Houthis destroyed at least one armored vehicle of the coalition with an anti-tank guided missile (ATGM).

The coalition responded to the Houthis’ surprise advance by launching a counter-attack. However, Houthi fighters repelled the attack destroying two armored vehicles with ATGMs and killing several Saudi-backed fighters.

The Houthis capability to conduct such well-coordinated offensive and defense operations in the same area is one of the reasons that allowed them to maintain a strong presence in central Yemen.

The Houthis’ active operations against Saudi-led forces were not limited to Ma’rib. In June, the Houthis were especially active in the province of Jawf, where they carried out dozens of successful operations. 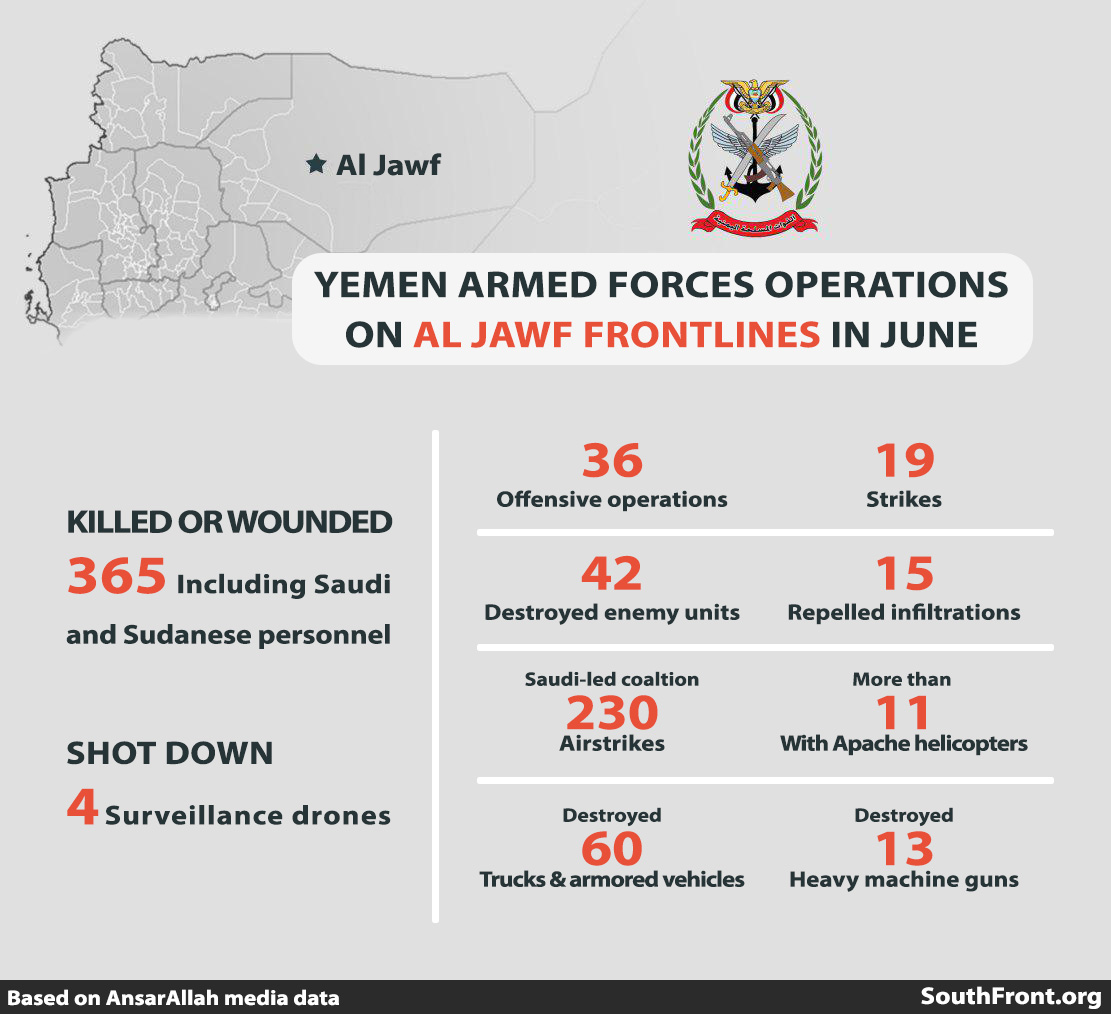 bravo bravo bravo…… SAA take a good look at the houthis…..no bs….but war and death for the invading Forces…………..bravo again!!

All Arab states that involve in injustice war with Syria, Yemen, Iran, Palestine and Libya are in great trouble.

This faggot arseholes wife ran off with millions and said that he was an impotent pervert. She is the Jordanian midgets sister.

The Washington Institute for Near East Policy (WINEP) is an influential (in the US) neocon/AIPAC-cutout thinktank. Remarkable article, but like everything else they publish, delivers a message between the lines. Maybe Israel doesn’t want it’s new buddy, the UAE, to be financially destroyed in Yemen on a useless war? If Israel is counting on Saudi Arabia and the UAE to be its ‘front lines’ in the war on Iran, then I could understand the sudden shift to, “Get out of Yemen”. Then again, WINEP’s message here may just be a lie to encourage some other action. Too early to tell.

“The war-fatigued Emiratis appear to be leaving Riyadh to fend for itself in the fight against Iranian-backed rebels, underlining the necessity of Saudi-Houthi talks.”

“…Abu Dhabi is unlikely to announce this departure in any official terms given sensitivities with its neighbor and coalition partner Saudi Arabia, which are heightened after recent attacks on the kingdom’s critical infrastructure, including pipelines and an airport. But several Emirati officials have privately and proactively declared it…”

“…UAE sources claim that Emirati units are almost 100 percent out of Marib, 80 percent out of Hodeida, and beginning to withdraw from Aden, leaving local oversight to the Yemeni forces they have trained (i.e., the Security Belt and the Elite Forces). Yemeni sources confirm at least part of the Aden drawdown. Similarly, Emirati staff in the key forward operating base of Assab, Eritrea, have declined by about 75 percent in the past two months, including personnel who trained Yemeni forces…”

“…The drawdown is not obvious in some areas; for example, Yemeni sources claim that no withdrawal is apparent in Shabwa province, where fighting persists over the oil districts of Bayhan. Moreover, UAE-funded mercenaries, including at least 10,000 Sudanese fighters supported out of the Assab base, will remain on hand to back Yemen’s military. Perhaps most important, UAE forces will continue running counterterrorism operations out of their base in al-Mukalla, the city they liberated from al-Qaeda in the Arabian Peninsula (AQAP) in 2016…”

Thanks for posting the article and this is my take:

First, I agree that Iran is the priority now and Yemen is a lost cause that is also costly. But MbS seems backed into a corner as he risks losing power or serious insurrection if he admits defeat in Yemen. But if MbS can put the blame for withdrawing from Yemen on the betrayal of Coalition partners that left him no choice, then MbS may have a face-saving out.

Betrayal can be pointed to by MbS regarding US stops refueling and Congress becoming hostile to supplying Arms to KSA. UK just revoked export licenses for weapons sales to KSA. The list of nations turning against the war in Yemen and pushing to end it is growing and has been reported in mainstream news. This is not enough for MbS to make a case for withdrawal but drawdown of UAE military forces and the claim this is being done behind MbS’s back makes KSA isolated and justifies questioning continued involvement in Yemen.

However, I have to question this statement “Abu Dhabi is unlikely to announce this departure in any official terms given sensitivities with its neighbor and coalition partner Saudi Arabia”

There is no way the UAE could conduct such a significant drawdown without the knowledge of KSA. So why is this being presented as some clandestine withdrawal to ‘leave Saudi Arabia to fend for itself in the fight against Iranian-backed rebels, underlining the necessity of Saudi-Houthi talks.” ? The answer is within the quote. The UAE are betraying MbS and this will force MbS to the negotiating table because the UAE capitulated, handing the Houthis victory. But the other culprit is Iran. Without Iran’s support the Coalition would have won in Yemen. The MSM and Gulf Media always associate the Houthi movement with Iran as if Iran is financing, directing and arming the Houthis while ignoring the fact that the US/UK backs the Coalition.

What this does is set the stage for a pivot to Iran to deal with the true enemy – if Iran was not meddling in Yemen, things would be fine. So get out of Yemen and go after the real threat which is Iran.

This seems to me a psychological operation in the making for some time now and coming to a head. If MbS does negotiate peace, will the Houthis demand Najran be returned to Yemen?

I think this has been thought through and the Houthis will want peace to end the blockade. They may also demand Najran be returned to Yemen. This war is coming to an end.

the houthis are by far THE most successful army right now on this planet, and SAA too :)))

The 2 TRILLION dollar question is, what have the Saudi morons done with the trillions spent on western weaponry? These pathetic idiots are worse than retards. They don’t even have basic training and looks like were sent straight from the Wahhabi madrassa. A Pakistani airforce officer who served with these idiots, told me stories about the fuckwit Saudis which in my younger days, I had a hard time believing. He said the Saudi air academy recruits were so illiterate and stupid that they used to run into training aircraft propellers and the Saudis lit fires inside Hercules C-130 and other transports to brew tea and burn the planes down. A few Saudia civilian airliners also suffered similar fate. And then the moron Americunts and Zionist parasites think that these idiots will be a “counter” against Iran, ROFLMAO!

They did down F15 if i remember correctly, maybe a year ago or something like that :)

That’s even better than i remember it! Yemen Houtis are true Muslims fighting against those who are disgrace to Islam.

No wonder tho, it was Brits who gave support to Saud’s because Faisal did not comply with Zionist demands. From that day, in 1926 or so, fate of the region was decided. This might sound a bit overstated but it seems to me that Sykes-Picot agreement was not the essence of the problem as much as support for nomad thugs was. Thanks for refreshing my memory.

They have downed a dozen Saudi, Bahraini, Jordanian, Moroccan and UAE jets. I have posted many photos.

Seriously, these Saudi shitheads or who ever they are, they are cowards and dumbasses. They simply don’t fight and just run away leaving their burning vehicles and weapons. The 81mm mortar position with dozens of dead Saudi vermin shows that the weapon was never used as there are ammo boxes all stacked up. The dumbass Saudis pile all their possessions in laundry bags, dump their weapons and run. Quite sad and pathetic. Wonder what the Saudi pimps have done with the $2 TRILLION worth of weapons they were forced to buy from the west at inflated prices? These stupid Saudis have no uniforms, officers, let alone body armor. Really disgraceful!