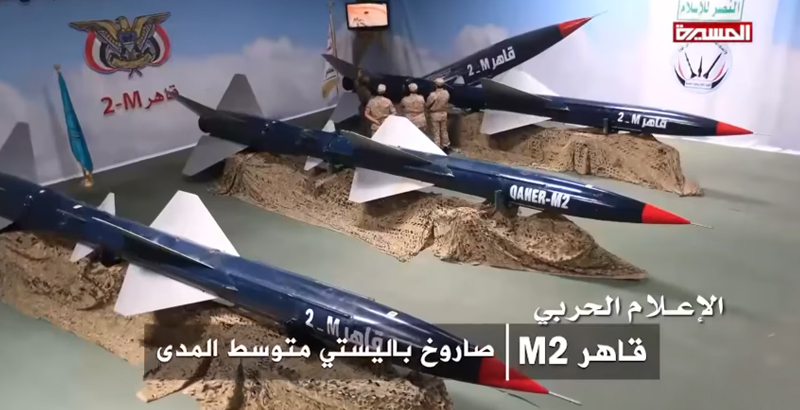 On May 6, the Yemeni Missiles Force [loyal to the Houthis] announced that it had shelled several positions of the Saudi Army in the southern Saudi provinces of Jizan, Asir and Najran with Grad and Zilzal-2 rockets. A Qaher M2 medium range ballistic missile was also launched by the Yemeni Missiles Force at a position of the Saudi-led coalition in the Mawza district of the western Yemeni province of Taiz.

An official in the Yemeni Missiles Force told the Yemeni al-Masirah TV that the missile strikes are aimed at deterring the Saudi-led coalition. During the last 24 hours, the coalition’s warplanes stepped up its aerial operations over Yemen and conducted dozens of airstrikes on the Houthis’ positions.

Meanwhile, the Royal Saudi Air Defense Forces (RSADF) announced that its Patriot surface-to-air missile systems had successfully intercepted two “ballistic missiles” over Najran province. The RSADF also revealed that both of the missiles had been launched from the northern Yemeni province of Saada, the heartland of the Houthis.

The intensified missile strikes by the Houthis and the Saudi-led coalition could prove that the Yemeni crisis is still far away from any political solution.

The Houthis need more air defense missiles. Anti-shipping missiles to sink Wahhabistani tankers would also be a fine thing! They would, of course be home built by Houthi artisans! :D

That’s very little comparing to that what the Saudis bought from the USA, Britain France, GERMANY & other greedy Western weapons-manufacturers. And as that wouldn’t be enough, mow .. PUTIN !!) sells the Saudis S-400 (????!!). No wonder that in the last few months the CHINESE became rather SILENT in the Alliance-issue and are circumspect..

We’ll see. A few years ago, Houthi missiles fired into Mordor were one or two per year. Now it’s dozens in a single night. If I was M bin Sauron I’d be pretty nervous. A few years ago the whole region was Wahhabistan’s oyster as Syria was about to fall, Yemen was about to fall and Egypt was so cowed as to turn over islands in Aqaba. Soon the Orcs of Mordor will be on the defensive on every front!

you are dreaming hahahahah

I suppose I dreamed up all the ballistic missiles raining down on Mordor now too?

Someone must show the houthis how to turn a household microwave into a microwave cannon. That will solve their problem with the SA airforce. And basically anything attacking them, that is powered by electronics.

Why don’t you show them? Better still explain it here, they will get the information eventually, and I would have a go at building it. Every home in Yemen could be an AA post, the Lebanese would love to stop Israeli planes flying over Lebanon, come on tell us?

Because i dont want to compromise the site. We been able to express freely here and they are rules we need to keep so we have a place that we can communicate between us. You seen what is happening to most sites lately that disappear from the net or are accused as terrorist sites.

But if you have basic electronic knowledge then use your brain and figure it out. Two things you need to do. One is to increase the power of the out put in watts, if you want range and second to direct the microwaves, that comes out of the nozzles. All you have to do basically, is dont tamper with the microwave just take of the casing from it and if you know enough electronics you see what need to be done.

During the cold war the americans printed step by step instructions and given them to all the people to use them in case of the USSR attacking them, within their borders then they remove them from circulation. In the beginning of the net`s life there was a lot of documentation on every thing. Now with the control on the net most of this archives been removed or disappeared.

P.S. Hez already know, what we know. How you think they stop the israelis back in 2006 and had them running crying like babies in terror?

Are you playing a secret service agent today ?…..the info on these microwave cannons is everywhere on the internet. I cannot fathom it out at all, sounds like a lot of nonsense to me, apart from the fact that the Houthis will at least have hot pizza.

Nope dont play nothing. I wonder what you are up to. What I said is part of asymmetrical training manuals of the special forces. As how to improvise and build weapons that will defeat modern era weapons from what is readily available in every modern house hold and been training seals all my life kid to this day in this way of warfare.

I can even teach you who trying to make fun of what obviously have no idea about, how to blow up with a box of matches and a 12 inch nail any big town in the world. unless you are with the idea that what all of you conceive as super powers only have the brains to build antidotes for their alleged military might. What cost 100s of millions only take a hair pin used correctly that cost nothing to render them, a worthless piece of junk. But I will not educate any one here is not the reason I am here.

Only those who understand/studied electronics will understand what ur saying.. and I agree with you.. ! it’s just r powering them in order to gained such a huge & great emf is the problem..! It had been done in small scale.. but in industry & military scales, I haven’t seen yet., though I believed it’s already existed.. coz I know, it can be done..!

It was a joke as you were so secretive. Blimey.

ok present the links of the manual of what I mentioned since is every where on the net. I have the manuals on my server but never seen them any where in the net. the last 15 years. And my manuals are directly the original print of the DoD.

How the hell do I know !!. As stated I was making a joke.

This top secret weapon you guys are talking about is (I assume) a very small version of this – https://www.rt.com/news/weapon-us-microwave-cannon-363/

At least the Saudis would die laughing, if all the Houthis starting marching with a bloody microwave on their body !!!

here it is. problem is you need a very long extension cord. https://techcrunch.com/2011/03/23/man-creates-microwave-gun-from-small-appliance-starts-burning-things-video/

It is possible to overload the patriot system, 5 or more simultaneous missiles will do the trick if you are targeting a single space.

Now get at it houthis….

Alternatively they could focus on targetting the Saudi forces inside Yemen.

If anyone urgently need S-300, that would be Yemenis fighting Saudi retards.

I think what would be more useful to them is anti-ship weapons to end the blockade.

Some CHINESE subs could “help” a little bit … ;) At least the propellers to “marry” the blockade-ships in “teams” of two ships, one that functions has to drag a wrecked ship out of the zone ;)

Salman, Trump and May are the godfathers of all terrorists Israel, ISIS, SDF etc.

Wrong again bone head Cicero spoke of people like you. Odumbo was the coach of the jv team get educated.

Saudi, US, UK, France and their proxy terrorist organizations Israel, ISIS, Al-Qaeda, Boko Haram and Al-Shabab have committed heinous crimes and now I feel their down fall.

I disagree with South Front’s assessment. The fact that the Houthis had time to receive, prepare, and fire long range missiles on several occasions show that this is static war and the killing has only political significance not military.