On March 8, the Houthis (Ansar Allah) continued their series of missile and drone strikes on targets in Saudi Arabia.

The Houthis claimed that they have successfully hit the ‘vital military’ target in the area of Abha International Airport with an undisclosed ‘modern missile.

In own turn, the Kingdom claimed that it had intercepted a ballistic missile fired towards the city of Khamis Mushait and a drone launched towards the southern region.

Earlier on the same day, Saudi Arabia’s defence ministry spokesman claimed that Iran was smuggling missiles and drones to the Houthi movement.

SUPPORT THEM HOUTHIS! With everything they ask for..

Get them Houthis Mo’ ATGM’s, Mo’ Missiles, Mo’ VBIED’s, Mo’ Suicide Drones….and they will Finish the Evil Empire of Wahhabistan….Mekka & Medina Back under Muslim Control!

Who are you talking to? So I can pass your message.

Thanks for the offer…but I already have passed my message…that is nice about this modern technology internet-thingy: You don’t need the old school Smoke signals or Carrier Pigeons anymore….

But one can still talk directly to Allah via imams and sheiks in the good old fashioned way.

Hahahaha…Hell will rain down upon you…

You lost me at “everything is automatically encrypted”

Is difficult to understand what he means. Real Medina Arabs are Jews he hates and they are not Islamists. Hasbara Hunter has probably been confused by excessive religious activity.

Obviously you never paid attention you are the one who is a bit confused: you are talking about Semitic Jews…I HATE Childsacrificing Paedophile Sabbatean Khazarian AshkeZioNazi Dönmeh Crypto-Jews…stay focused boy!

Even the term “Semite” is historically vague and convoluted. Canaan (Phoenicia) was said to practice child sacrifice, at least according to the Torah/Old Testament which is not a reliable historical source.

Just Me
Reply to  Anglo Canadian

Hollywood created the modern version after the Khazar occupation of Palestine in 1948.

The problem that myself and others have with the Khazar hypothesis is that it assumes jews were “okay” until the “Khazars” came into being, the jews were just as bad towards non-jews since ancient times as they are today, regardless of their jewish ethnic group. Nearly all jewish religious texts weren’t written by any of the Ashkenazim.

Most Israelis aren’t “white”, almost half of them may happen to appear “white”. Ashkenazi jews from the former USSR comprise the second or third largest demographic in Israel. Tel Aviv is ranked as the #1 “gayest city on earth,” surpassing New York, L.A. and San Francisco.

Despite Bangkok’s reputation for transvestite prostitutes, Thailand’s comparatively much more conservative. Come to think of it, it’s weird that Iran forces sexual conversion surgeries on gays and effeminate males under the claim they are “women inside”.

Just Me
Reply to  Anglo Canadian

It is also a very racist stratified society. The Khazar Ashkenazi have
held total control over power from Ben Gurion to Nethanyahu. The
Separdic and Mizrahi Arab Jews are treated as “n i ***ers” and don’t even
bother to see the fate of the African Falashas who riot frequently
against racism. It is basically a failed state propped up by US and
western tax dollars and weaponry.

From what I have seen, the Sephardi and Mizrahi harbour a feeling of superiority over non-jews and more solidarity with Ashkenazi jews than they have ever had with non-jews of any phenotype worldwide. I can attest that Falashas and other Abyssinian jews are indeed discriminated against in Israel. Not unlike Saudi Arabia and other Gulf monarchies, Israel also imports plenty of labour from abroad; even the IDF employs foreigners in their ranks, anything to favour placing their own fellow jews in white collar jobs. The only exception is when they need more specialized, high skilled labour.

The Khazar narrative also lays blames on whites for the jew’s wrongdoing by conflating them with Europeans, the word “Europa” originates from a Greek legend where Zeus abducts and rapes a Phoenician (Canaanite) princess named Europa. It is known that jews owned slaves long before, during, and long after the Roman empire existed.

In the case of their involvement in white slavery, they impregnated their female slaves and allowed the distant descendants of these slaves to be freed from bondage to jews if they converted to Judaism.

Slowly they began to interbreed with white women, they racially assimilated slowly in Europe, allowing their slaves to convert to Judaism. Not only were the Khazars a factor in the creation of European Jews, they also made their way up from Italy into the heart of Europe.

I recognize that European colonial powers and leaders financially indebted to jews reluctantly gave Palestine to the jews, some proudly did so. In the case of the Haavara Agreement, the Germans arranged with Zionist organizations to start sending jews to Palestine, in exchange for jewish organizations to ease their lobbying efforts of arranging an international economic boycott against Germany.

Jews only started to get expelled from Germany after “Judea Declared War on Germany” with their mass disinformation campaign, while lobbying for Europe and America to economically strangle Germany and declare war to overthrow Germany’s former democratically elected leader (Adolf Hitler) in 1933.

The civilized West will win all wars because the wars will be in the Middle East where they still believe in gods and other supernatural beings. Muhammad is so ugly that one is not allowed to show his face in pictures or drawings. When Islamists try to govern themselves, it only results in poverty and misery. This is where civilized powers from the civilized world come in to correct the madness.

I have a friend with skizophrenia. He has written almost hundred of books and has more than 10 blogs, also posting on other people blogs, writing articles for 3 magazines, he gets paid for. I think these people are the most active on the Internet, especially in politics niche.

Half a Decade Later: This is How Saudi Arabia Lost Yemen’s War

After half a decade, the Houthi rebels improved their weaponry; and after managing to withstand US and western backed Saudi air and ground onslaught, they are moving to an advanced stage of aggressiveness, backed by unrelenting Iranian support and innovative asymmetrical tactics . The Saudi-UAE-led coalition, on the other hand, did not gain anything from this war apart from worsening its global image and exposing their western armed and supported militaries as inept paper tigers.

It is now more than half a decade since the Saudi-UAE-led coalition intervened in Yemen in 2015. Saudi Arabia has not only failed to achieve a single military objectives it may have aimed to reach when it launched its campaign, but the balance of power also increasingly appears to have turned in the Iranian-backed Houthi rebels’ favor.

The war has also appeared to have negatively impacted the kingdom’s ties with its other Sunni allies, as more countries halt their involvement in the coalition. For instance, Jordan and Morocco are two long-standing allies of Saudi Arabia. However, the Saudis are angry that Amman has withdrawn its support for Yemen’s war. Morocco, in turn, suspended its participation in the coalition’s fight against the Houthis last year. Certainly, such an action would not have pleased the Saudi leadership, which is increasingly isolated in the Arab and Muslim world.

Garga
Reply to  Just Me

Erm…. Houthis aren’t rebels anymore, that was a long time ago.
Houthis are part of Ansarallah which formed the real Yemeni government in the capital, elected by more than %80 of the population in 2015.

But the UN recognizes a transitional president (which was chosen for 2 years) with a finished term in 2014, and twice resigned and one time booted. This government rules from a hotel in Riyadh on almost nothing.

Saudi’s taking a pounding! Wouldn’t be surprising their next move is something really nasty given their inability to reason

before long mohammed bin salman will ask to join jared kushner in florida and jared, being a jew, will turn him down since he already has used up his usefulness,

Frankly, even their US fuckwit masters are “raising alarm” for Saudi pimps future as the daily attacks despite a complete news blackout are taking a heavy toll of the deadbeat Saudi economy. The strike at Ras Tanura, even though limited in scope, did some serious damage and the fires are still burning. The Ansarallah now have unlimited amount of loitering munitions and much more brazen attacks are coming. 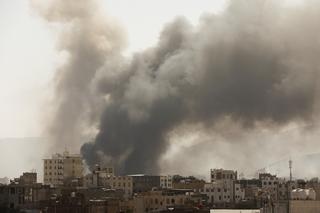 This would end much faster if Iran would openly support them instead of covertly
Smuggling one missile at a time is the reason this war has been going on for 6 years
All their airports should be bombed instantly and simultaneously, because no airport means no air force 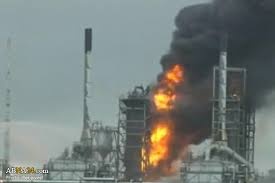 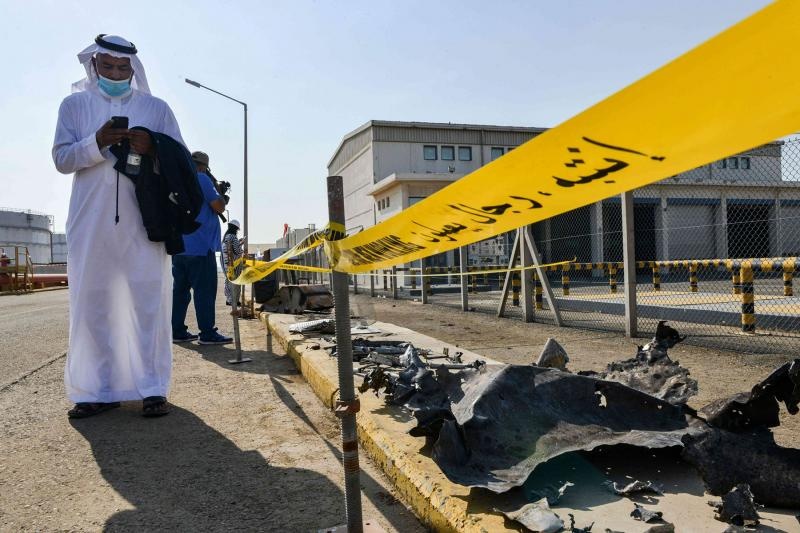 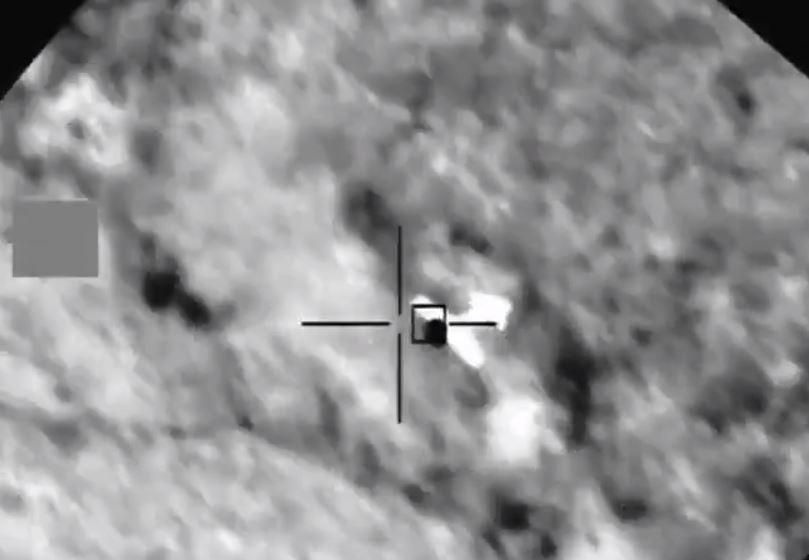 These are shitty days for the clown prince and the next ones will be even worse.

The a$$hole MBS has done more damage to Saudis in last 5 years than their entire miserable 90 year old existence. They are running $100 billion a year deficits and their foreign assets have dwindled to less than $400 billion.

Thanks to a disastrous decision by a mentally unstable Crown Prince, debt has increased as oil
prices have remained low, while Houthi missiles and drones are wreaking havoc on Saudi oil markets and infrastructure.. Trillions of dollars are also needed to fund MBS pie in the sky
ill-conceived Vision 2030 projects, including a desert mega city, which were based on a successful outcome of the Aramco IPO, which failed to materialize. Lower oil prices and Covid-19 prompted Saudi Arabia to borrow $56.6bn after it burned through foreign reserves and announced a stimulus package of $32bn. The quagmire in Yemen and growing damage to the oil infrastructure, foreign worker exodus and internal instability is now costing the Saudis in excess of $5 billion a month.

This is propaganda. This “European” is a joke. Our 2nd amendment is not the problem, yes there’s a lot of guns in civilian hands, yet Russia had more people shot than US. There were NO guns there !
So, this “European’s” country is being subjected to the same things US is. When his countries military comes to force the “vaccine”, or start attacking civilians, how are the people to defend themselves ? They’re not, they, and this arrogant condescending liar are going to die. The States with high firearm crimes are the States/Cities where guns are outlawed in civilian hands. Chicago, New York, San Francisco, wherever the criminal knows law-abiding citizens will not be armed.
The mass shootings were/are staged false flag events, carried out in designated “Gun Free Zones.” Where civilians must disarm to enter.
USA is NOT a “Democracy” one would think our “European” hero would be well aware of that. Instead he’s stupid as fence post.
The City of London runs USA, Europe, (the West) the same agenda’s are being carried out throughout the West, there’s not a country that’s not suffering.
Anyone that believes this idiocy, stupidity, and outright lies, deserves what happens to them. Europe has more than it’s fair share of crime, poverty, brainwashed sheople, and useful idiots to sell out their countrymen like this “European” is doing his.
And the troll that posted this.

Just Me
Reply to  Jim Allen

Europe is a collection of warring tribes and soccer hooligans.