The Houthis, also known as Ansar Allah, have finally imposed control of the Saudi-led coalition’s Mass Base in the central Yemeni province of Ma’rib.

A source in the authorities of Ma’rib confirmed to Sputnik that the base was captured by Houthi fighters on November 20. According to the local source, the Houthis stormed the base from several directions after fierce clashes with Saudi-backed forces.

“Yemeni military units which were situated in Mass camp withdrew after the Houthis overrun the camp’s defense lines,” the unnamed source told the Russian news agency.

The source revealed that the military pressure from the Houthis, who launched several attacks on the Mass Base in the last few weeks, forced Saudi-backed forces to evacuate heavy weapons, including artillery and armored vehicles, from the base.

Last week, a number of Yemeni sources reported that the Mass Base was captured by the Houthis. These reports were denied a few hours later when Saudi-backed forces shared a video from the base.

This time, several media sources affiliated with Saudi-backed forces confirmed that the base had been captured by the Houthis. However, the Yemeni group is yet to make an announcement.

The Mass Base, which is located 25 km away from Ma’rib city center, was used by the Saudi-led coalition as a camp to train forces loyal to Yemeni President Abdrabbuh Mansur Hadi. 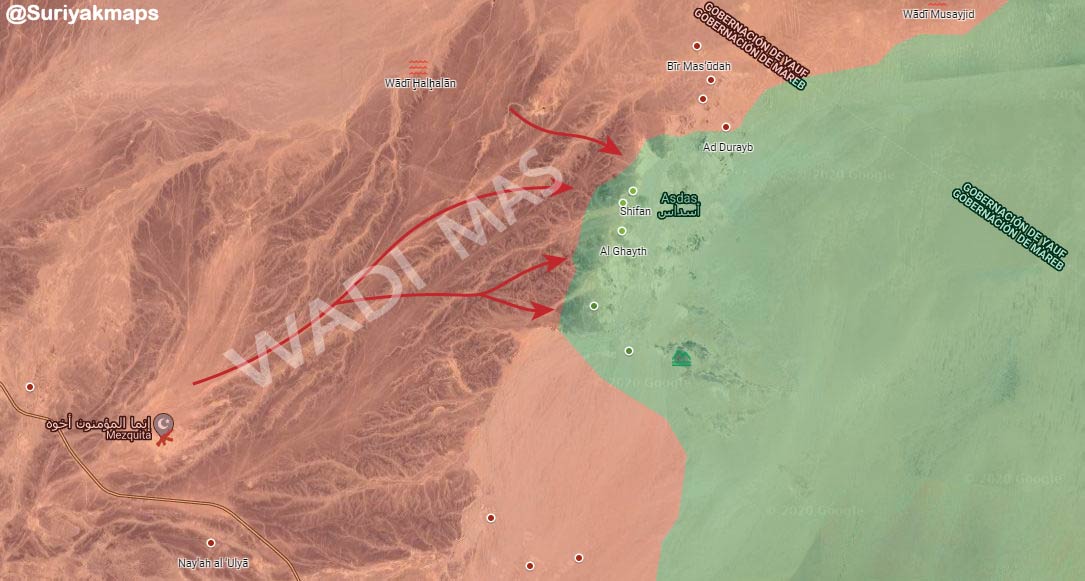 The fall of the Mass Base is a major blow to the Saudi-led coalition and its Yemeni proxies. The Houthis, who captured vast parts of Ma’rib earlier this year, are now posing to attack the province center.

Excuse me, but would you be that kind to tell me what that have to do with Yemeni victory?

Why is this war still going on ? I thought the collapse of the Saudi regime was imminent ? I guess the many ” seers ” on this comment board arent that psychic after all.

The Saudi monarchy chimps have absolutely NOTHING to do all day but sit around and argue about new schemes to preserve itself and its wealth. Same with the other inbreed GCC shitholes. The monarchies have plenty of staying power for now, but their ‘countries’ and welfare economies are an absolute dumpster fire. All have iron-fisted control of their media. Are you expecting to hear about this on the evening news? You will hear absolutely nothing until head-choppers are posting videos of the al Saud clan hanging from Riyadh street lamps by piano wire, lines of Abu Dhabi government workers being executed in public or Emirati royalty beheaded on the steps of the glass skyscrapers in downtown Dubai. Until that happens, they will keep reporting that everything is just fine. Hadi and loyalists in Yemen slowly being thrown under the bus – nobody cares about Yemen anymore. Meanwhile:

That’s just a sample from Manoj Nathani’s blog [link] (paywalled), but most can be verified. Israel needs all of them to fight its eternal war with Iran. If the GCC collapses, all its kill toys are worthless (except to head-choppers). Yemenis will just shake their heads in amazement, demobilize ( and start rebuilding without the annoying Saudi F-15 strikes. Maybe grab Jizan back while they’re in the area, but they have no real interest in the rest of the Saudi shithole. Poor dudes won’t even get reparations from a bankrupt, ruined GCC or their new US/Israeli owners.

” Poor dudes won’t even get reparations from a bankrupt, ruined GCC or their new US/Israeli owners. ”

When the war is finally won the ” poor dudes ” shouldn’t stop till they annex a good portion of the Saudi oil fields in the south. That should be a nice start to repay Yemen for all its ” trouble “.

Nobody could really argue about that being justified, but the Houthi have always said the war – as far as they were concerned – was just about kicking the Saudis (and their bottom-boy, Hadi) and the UAE out of Yemen. That’s it. They don’t give a shit about Saudi Arabia or the UAE or anyone’s oil. I know that’s always easy to say when you’re the underdog. Today? Hard to say what political power struggles are going on in Ansar Allah right now now. Houthis were historically the dealmakers among clans, not petty thieves or border raiders.I think they just want to kick the the Saudis ass out of Yemen, then go home, hang grandpa’s Mosin-Nagant back on the wall and have a nice cup of tea and catch up on the local gossip. Because that’s what Houthis do.

and Chew some Khat too, they should make a point of visiting Meru, Kenya where most Khat is cultivated-on a lighter note

Houthis were also big khat cultivators in mountains of northwestern Yemen, similar to the Nyambene Hills of Meru. There’s some debate about where it was grown first and where it became a valuable export crop first – Kenya or Yemen – five hundred years ago. It predates the popularity of coffee in both places. Yemen’s years of drought make it difficult to grow water-intensive khat there now (but they do it anyway).

Cathinone is superior to caffeine in many ways, but degrades quickly. You have to buy fresh leaves. Since it didn’t ship very well five hundred years ago and you had a big plug of it in your cheek for hours at a time, the Brits running Somaliland back then decided it was an unprofitable commodity and uncouth practice. It’s illegal almost everywhere else today, and a Schedule I drug (like heroin!) in the U.S.

In any case, khat parties were the original internet. The U.S. just added the wires, cat videos and pr0n later on.

So the Saudi scums cowards again failed as usual

They need to send these boys to Idlib,they know how to kill terrorists.

Frankly, you have to admire the Ansarallah, they are the ultimate warriors.

Why is that dear Ali?

Ansharrallah should send one thousand fighters to homs desedrt to wipe this ISIL Houthis are good foot soldier and can survive days without food . ISIL will think hundered time to Attack This fighters in desert and mountain.

This is in spite of the homosexual Sid Loder’s cohorts using the waning Holy Ghost, (exposure is causing disbelief) anyhow I noticed the Australian media starting to equate hanukkah ( maggot Jew celebration) with Christmas, I wonder how that works, actually there are 6,000 less maggot Jews living in Australia since 2012., In the 2011 census there were 97,321 maggot Jews living in Australia in the 2016 census there were only 91,022 maggots that’s out of a population of 24,99 million, probably 25 million in 2020.

Stalin was right ship em out but I feel sorry for the people that gets em.