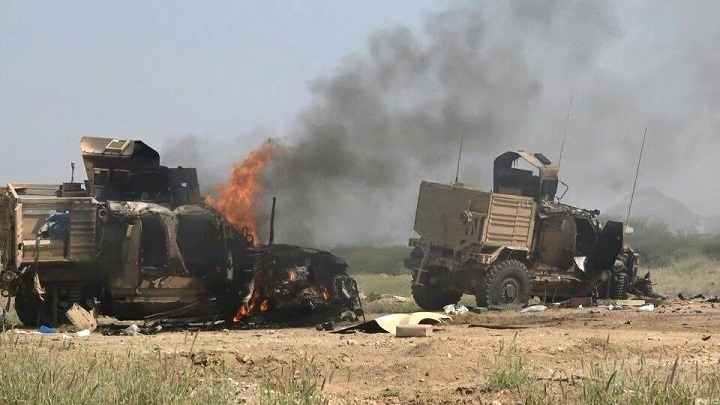 On June 13, Houthi fighters destroyed thirteen vehicles of the Saudi-led coalition and its Yemeni proxies while defending their positions south of the port city of al-Hudaydah along the western Yemeni coast, according to the Yemeni al-Masirah TV. The Houthis targeted the vehicles with ATGMs, rocket-propelled grenades and IEDs.

Earlier, the Saudi-led coalition and its Yemeni proxies launched their ground attack on al-Hudaydah. According to Yemeni sources, the coalition has failed to capture any key position south of the coastal city so far.

Meanwhile, the Emirates News Agency (WMA) announced that four service members of the UAE military were killed in Yemen, including a First Lieutenant of the UAE Navy. This confirms that the Houthis managed to hit a warship of the Saudi-led coalition as they had claimed before.

Pro-Houthi sources claimed that several warships of the Saudi-led coalitions attempted to land troops on the coast of the city of al-Hudaydah in the early hours of June 13. However, the attempt was foiled by the Houthis and the Yemeni Navy.

The Saudi-led coalition may repeat the attempt in the upcoming days, especially that its troops appear to be unable to advance towards the airport of al-Hudaydah south of the city.

There’s really no question to the outcome…

lol…like i said before….this could be over very soon for the jew slave army…lol…..cant even take an open area with air support lolololol………..if they fail here those walking talking pricks, hihi, this war is over. ps. new news…….houthis have advanced deep into saudi territory capturing numerous mountain saudi bases…….. go houthis…show no mercy to the invaders……brave men fighting against usa,england,saudi,uae,sudan,columbia,israel

God bless you long suffering Yemenis! your struggle is not lost on the world. we are with you in our prayers. and the Houthis… i don’t even have words. God keep you as the last line of defense against the bloodthirsty, child killing demented evil axis of america, britain, france, saudi, etc… God bless the Yemenis

what you say is enough. When the world explode you`ll have your chance to chose a side practically.

Great Amen To That!

The Wahhabi ‘Nato’ Led Saudi Arabia and the Western imperialist Nato led by the satanic U$ against the small indigenous Houthi militia! I wish Houthis victory all the way!

Thirteen Vehicles Destroyed & Only Four Dead…?!!…WTF… Were it Remote Controlled Cars….was it Wahhabi-Lunch-Break Time and they parked their automobiles in front of the Lunchroom or did they Run for their Lives?