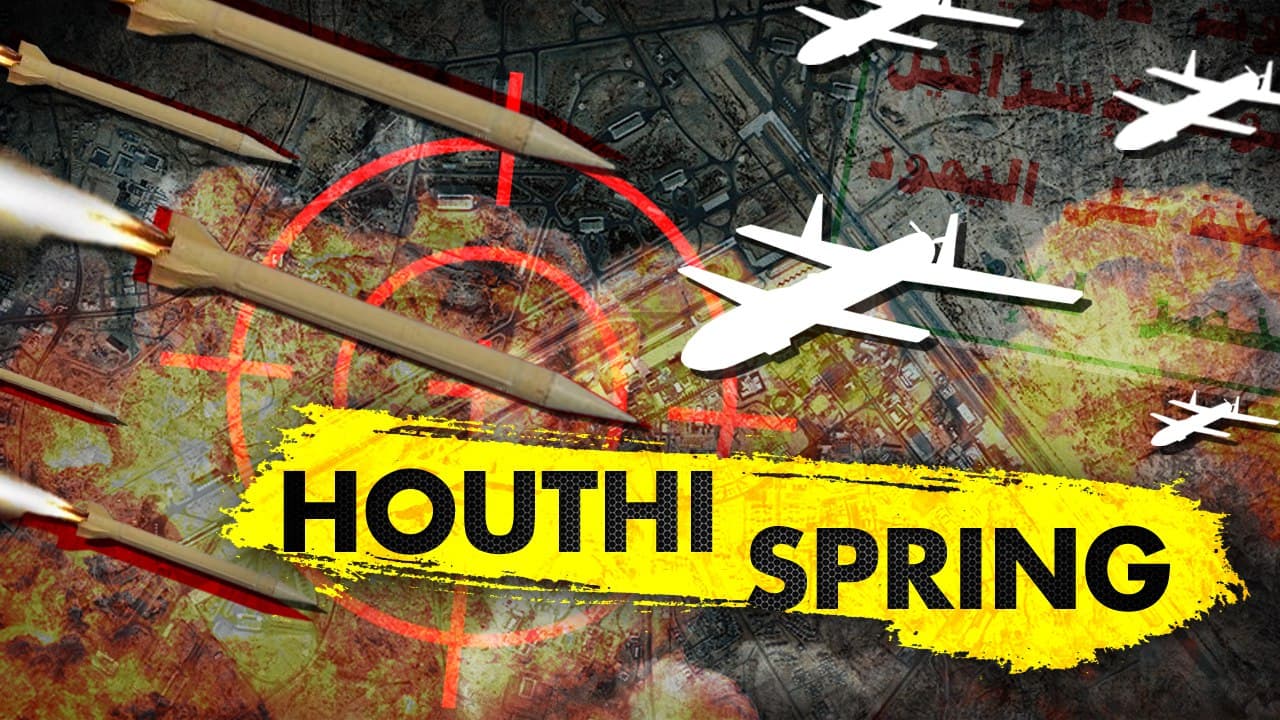 On March 26, the Houthis (Ansar Allah) announced that they had carried out a large-scale attack on targets inside Saudi Arabia with missiles and drones.

The large attack, codenamed “Operation National Day of Resilience,” is meant to commemorate six years of the Saudi war on Yemen.

During the attack, the Houthis targeted four facilities of Saudi oil giant Aramco in Ras Tanura, Rabigh, Yanbu and Jizan as well as Kind Abdulaziz Air Base in Dammam with twelve Samad-3 suicide drones and eight missiles of the Zulfiqar, Badir and Saeer types.

“The Yemeni Armed Forces [allied to the Houthis] warns aggression forces of the consequences of going on with their aggression and siege against the people of faith and wisdom [in Yemen],” Brig. Gen. Yahya Sari, a spokesman for the Houthis said in a statement.

From its side, the Saudi-led coalition claimed that its air-defense means had intercepted a ballistic missile as well as eight drones launched from Yemen over the Kingdom’s southern region. The Saudi Press Agency released photos showing the wreckage of some of the downed drones. 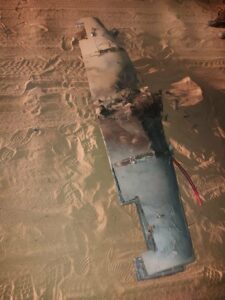 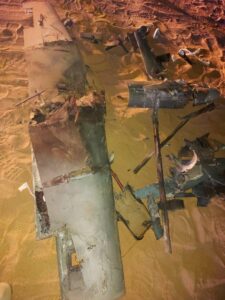 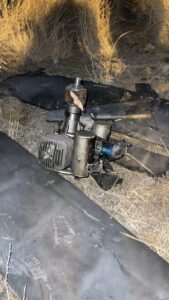 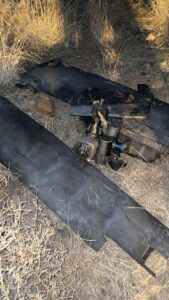 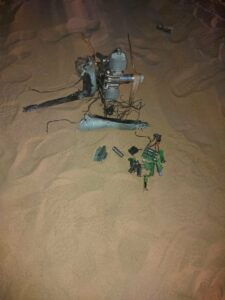 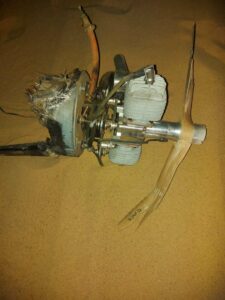 Nevertheless, the Saudi Ministry of Energy acknowledged that a petroleum products distribution terminal in Jizan was hit. According to a spokesman for the ministry, the attack caused a fire in one of the terminal’s tanks. Nevertheless, no casualties were reported.

“The Kingdom strongly condemns this cowardly attack against vital installations. The attack does not only target the Kingdom, but also petroleum exports, the stability of energy supply to the world, freedom of world trade, as well as the global economy,” the spokesman said. “ It also affects maritime traffic and exposes coasts and territorial waters to serious environmental consequences.”

Operation National Day of Resilience was the fourth large-scale missile and drone attack by the Houthis on high-value targets in Saudi Arabia this year.

The Houthis’ recent attacks on Saudi Arabia demonstrate their growing capabilities. These attacks will not likely stop, as long as the Kingdom is determined to continue its war on Yemen.

The fairy Clown Prince MBS is definitely feeling the pinch. The Coalition of Fairies had proposed ceasefire negotiations which the houthis gave a short shrift. Go Houthis! Keep the samads, the Qasefs, Zulfiqar, Badir and Saeers raining!!!

What amazes, nay, astonishes me is how Yemen is able to obtain such results lacking the superb F35 B aircraft, described by Tommy as unprecedented unique!

Maybe Yemen was not invited to the presentations of the Lockheed Martin sales guys, and therefore do not know, how outstanding these planes are?

Maybe it’s better if ladies and the under-age skip this comment altogether.

The operation was done 2 days ago, we knew about Riyadh and Hofuf. Yeah, honest Saudis tell you they intercept all the missiles and drones but in those pics all I see is the remains of just one Qasef-2k. Even that probably after detonation.

Apparently the thick black smoke is from my aunty’s panty that is on fire not Aramco’s refineries and terminals.

The Kingdom strongly condemns this cowardly attack against vital installations. The attack does not only target the Kingdom, but also petroleum exports, the stability of energy supply to the world, freedom of world trade, as well as the global economy,” the spokesman said. “ It also affects maritime traffic and exposes coasts and territorial waters to serious environmental consequences.”

Cry us some more. Cowards repeatedly bomb civilians, starve them, destroy sources of clean water and health centers, deprive the population from fuel, medicine, food and cause them to live in constant fear of bombing. In short, they use terror on civilian population and will double down after these warnings. If it wasn’t for the civilians they kill, I’d say continue on this path by all means.

Expect the UN to run around itself like a headless chicken and cries of CEASEFIRE!! from EU. Repulsive hypocrites!

Dear Saudis, meet the dark alley.where you’d understand what does it mean to rape another nation. Since you can’t do anything about it, at least try to enjoy!!

Yeah this whole ‘freedom of world trade and stability of energy supply’ like Saudi still matters to the world when the nearby Suez canal is blocked by a container ship.

About that… Again, please no under-age and ladies read at your own discretion

Did you know that the ship “drew” a dick, erected and complete with testicles over a butt before entering the canal?

I wonder if there’s a message in that.

I can understand when someone draws dicks into the sky with a light aircraft, but this… I mean, I got so many questions… moving a 200K ton ship around like this is not the same as with a Cessna… Did he notify the other vessels of his planned route? How did he explain it all to them… what did they think when they had to evade his course?

The conversation between captain and crew was probably like: “Hey crew, you won’t come home to your families for another few hours (or days??) because I want to steer the ship in circles and other unusual and risky maneuvers while wasting fuel so it looks like funny peen & ass on the map lololololol”

Or did he want to draw a rocket in order to warn the Saudis about their arses being penetrated in Yemen?

The pattern of their route is indeed worth more investigation :)

This could simply be coincidence.

Alternatively, this could be the calling card of a secret cult (“The Cult of the Flying P**is”), given the fact that there is an existing pattern:

The Cult seems to be comprised of multi-national individuals distributed across military and civilian domains.

Yeah JS said the likely scenario is the Israeli made computer virus Stuxnet had a hand in taking over the ship while the ship crew were probably playing cards while waiting to enter the canal.

Never fear, Biden is here…LOL. He is going to help make KSA more secure, for a price. How much more secure depends on how deep MbS digs into his pockets. I wouldn’t be surprised if he buys and supplies Israeli Iron Dome system. Actually doubtful of that, as the Israelis would see just how vulnerable THEY really are. So far, it seems that the only thing benefiting from western defense tech is the MIC bottom line…well, that and firefighting companies…reconstruction companies…refinery equipment companies…oh, and toilet paper companies.

But I’m sure Saudis need more of the same systems. Maybe if they could fire 50 SAM missiles at the same time and saturate the sky they could shoot down a drone or two? The only downside is the “boomerang effect” of those defensive systems which kill more civilians in Arabia than Yemenis ever did in the last 6 years!

never forget, Hezbollah has also these skills or maybe better than Ansarallah

more and yet more, can’t tire of hearing the set backs for the clown prince, mohammed bin salman, notoriously known for having shelled out 450million bucks for a fake leonardi da vinci, a fake da vinci – how stupid can you be (although the jewish art-brokers probably paid back the full amount or risked getting their heads chopped off) and he himself is on the ropes since hardly any claimant on the saudi throne has managed to feck up to such a degree as the clown prince, his cousins are sharpening the knives and readying the rope!

An internal Saudi internecine conflict would indeed be fun to watch. With the US as the ‘B’ movie. :)

Especially when the Saudi Shia rise up against the ‘royal’ house of American satraps.

Houthi / Yemen have nothing more to lose. That’s the last enemy you want to face on a battlefield.