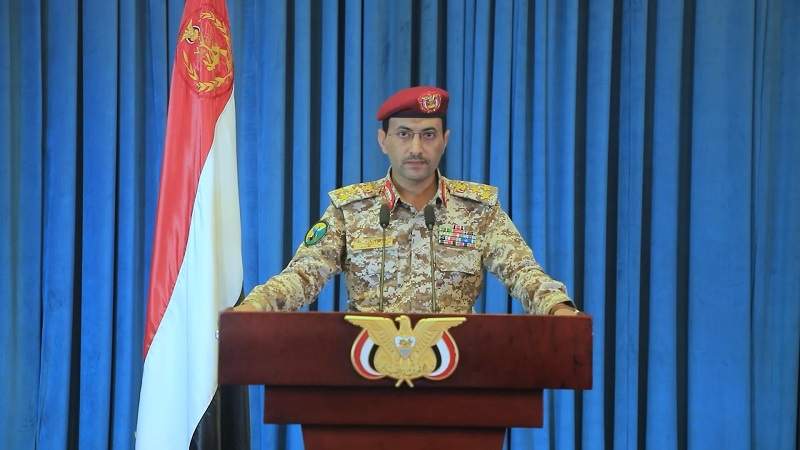 Brig. Gen. Yahya al-Sari’, the military spokesman of the Houthis.

The Houthis (Ansar Allah) have official claimed responsibility for the October 22 drone attack on al-Dabba oil terminal in the eastern Yemen province of Hadhramaut.

The group attacked the oil terminal with two suicide drones. The attack took place as a Greek-owned oil tanker, Nissos Kea, was approaching the terminal. Both suicide drones landed near the tanker without causing any casualties or material losses.

Brig. Gen. Yahya al-Sari’, a spokesman for the Houthis, said in a statement that the attack on al-Dabba terminal was a “limited warning” meant to prevent Nissos Kea from “looting” Yemeni crude oil.

The spokesman stressed that the Houthis are committed to ending the “grand theft” of Yemeni resources, noting that this wealth should be used to pay government employees and improve public services in the country.

“The Yemeni Armed Forces will not hesitate to carry out their duty to stop and prevent any ship that tries to plunder the wealth of our Yemeni people, and with God’s help, it can launch more warning operations in defense of our great people and to protect its wealth from tampering and looting,” Brig. Gen. Sari’ said.

Days before the attack, the Houthis sent warnings to the Greek company that owns Nissos Kea as well as to PetroMasila, the national oil company operating al-Dabba terminal.

Saudi Arabia, which has been leading a military coalition against the Houthis since 2015, condemned the attack on al-Dabba oil terminal, calling it an escalation.

“This attack was an escalation by the Iranian-backed terrorist Houthi militia after the end of the United Nations ceasefire in Yemen, which the militia refused to extend and expand despite all the efforts that were made,” the Kingdom’s Ministry of Foreign Affairs said in a statement.

After the end of the UN-sponsored ceasefire in Yemen on October 2, the Houthis demanded the Saudi-backed Yemen government to pay the salaries of state employees in its areas of influence from the national oil revenue. Back then, the group warned the government and its allies that it will not sit idly if its demand was not fulfilled.

This warning attack on al-Dabba terminal was not likely the first such move by the Houthis. On October 19, two suicide drones attacked al-Nashimah port in the central province of Shabwah. The attack, which was apparently just a warning, didn’t’ result in any losses.

The Houthis’ warning attacks could provoke a response from the Saudi-led coalition. This would reignite the war in Yemen and hinder the UN efforts to broker a new ceasefire.

UN cease-fires are a joke. The only one who ever benefit from such cease-fires are the aggressors…and those who are stealing attacked nations blind. So when is the KSA ever going to abide by those UN rules? Never. Hopefully, the Houthis are biding their time for when the time is right. They will never get a truce or end of this blatant war by trying to talk to them. It did no good whatsoever for Russia and it will do no good for Yemen. Everyone sees what it takes to get these thieves to listen. Also, I wonder if trolls and scam artists have to go through this stupid ‘edit’ crap to post? I think not, only serious posters get put off.

Saudi is liars. they are 3 face hypocrite coin . Saudi ceasefire is just to get time to loot oil from Yemen to get money for war. no more ceasefire just hit time were it hurt most

No video of shitskins being killed??? i am so disappointed.

If we must we will work with Saudi to destroy the Houthi terror. We will show Saudis the best way to neutralise them.