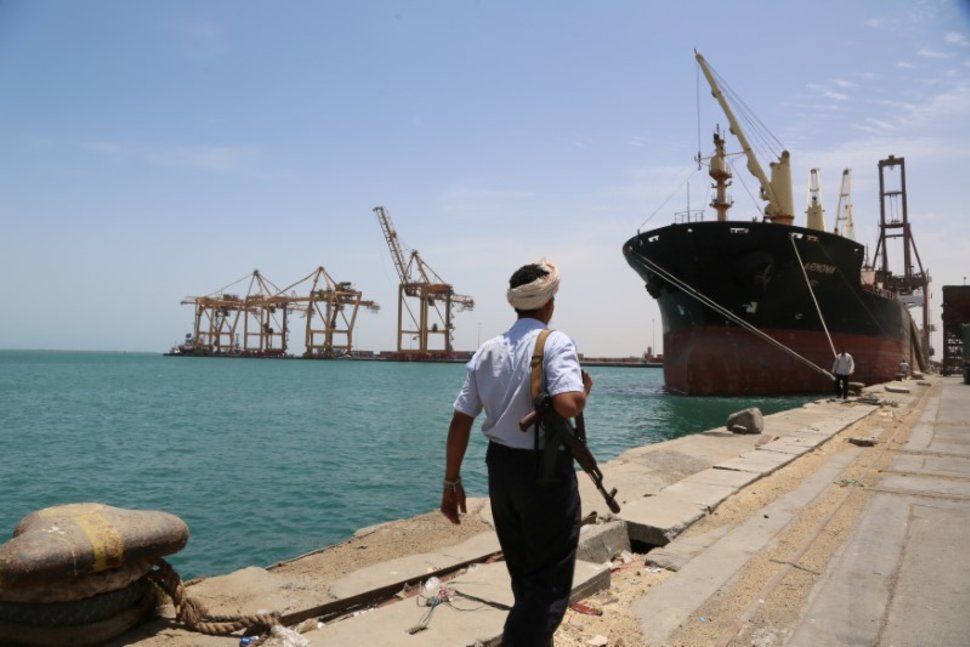 The Houthis have captured 19 oil tankers off the Yemeni coast, near the Red Sea port of Hodeidah, Saudi ambassador to Yemen Mohammed Al Jaber said on April 21 according to the Saudi newspaper Asharq Al-Awsat.

The tankers are allegedly carrying 200,000 tons of oil. The Saudi diplomat claimed that the Houthis had imposed “royalties up to $1 million for each ship allowed docking in the port.”

However, it’s important to note that all the reports about the detained oil tankers are surfacing from  Saudi sources.

Minister of Local Administration and Higher Relief Committee chairman in the Saudi-backed Yemeni government, Abdul Raqeeb Fatah, also accused the Houthis of seizing “vessels loaded with relief and humanitarian aid” in the port of Hodeidah.

“Militias have detained over 65 relief vessels, and militarized the Hodeidah port—use it to seize relief and commercial vessels, and threaten international navigation in the Red Sea,” the Saba news agency quoted Fatah as saying.

On September 14, 2017 weapons traffiking threatened that the movement will attack Saudi oil tankers and vessels should the Saudi-led coalition attack the prot of Hodeidah.

“We could target Saudi oil tankers and we could do anything,” he said adding that the Houthis’ missiles are capable of reaching the UAE capital of Abu Dhabi and any target in Saudi Arabia.

Since then, the Houthis have increased their ballistic missile attacks on Saudi targets in the Yemeni-Saudi border area and inside Saudi Arabia itself. Saudi Arabia is fiercely censoring media reports on the results of the Houthis’ missile attacks. However, according to local sources, the Saudi military’s air defense forces face significant issues with intercepting these missiles.

For example, on April 23, Saudi news agency SPA said that Saudi forces had intercepted two missiles launched by the Houthisat a Saudi Aramco facility in the southern city of Jizan. In turn, the Yemeni Al-Masirah TV said they had targeted a port belonging to the Saudi oil giant.

Yemen’s Defense Ministry vowed a “crushing response” to the assassination of a senior official from the Houthi Ansarullah movement, Yemeni Saba news agency reported on April 23.

On April 19, a Saudi airstrike killed Saleh al-Samad, the head of the Houthi Supreme Political Council, in Hodeidah. Houthi leader Abdul Malik al-Houthi said in a televised statement that Samad’s death would have “severe consequences”.

“The forces of aggression, led by America and Saudi Arabia, bear the legal responsibility for this crime and all its consequences,” Reuters quoted the Houthis’ leader as saying.

The death of Samad, who headed the group’s highest political body in areas under their control, is a notable blow to the Houthis in the three-year-old war that killed more than 10,000 people and pushed millions to the humanitarian crisis.

On April 24, the news portal Middle East Eye reported that the Houthi Council of National Defense had announced a state of alert following Samad’s death and threatened to retaliate.

Most likely, the Houthis will respond with new ballistic missiles attacks on Saudi Arabia.

Search on YouTube : ‘ Israel And Saudi Arabia Are Sisters ‘

no need is been known for the last 50 years, or so…

Israel and Saudis have no religion. They are atheists.

they both serve Greed!

They both serve satan*

What I am saying this is true. They have held Pslestinians and Yemenis small kids orphan and held hostage in confound areas. They torture and slaughter them in fake combats. Demolishing their homes and attacks on funerals and weddings people. Stealing and grabbing their lands. They also do adultry and covet to their neighbours. In which religion it is written to do this?

These days evidence is not required anymore, as long as the claim is against one of few countries who find themselves in the cross hair of the Coalition of Terror. Saudis could not and cannot capture al-Haudayda and see that based on a lousy pantomime, western countries are willing to attack a country which is fighting terrorism. Naturally they think why don’t we do it?

The result is the seizure of 19 oil tankers and numerous relief convoys but there’s no need to publish the names of those ships, no sirrie! Apparently those ships are all in the port of Hudayda and this claim can easily be checked. In addition to that, with this claim Saudis equated Houthis with Somali pirates. We are to believe that somehow Houthis managed to break the naval blockade, attack the ships AND break the blockade AGAIN with their prize, more than 20 times.

Wow! That’s a lousy blockade if Houthis could pull this off in addition to their usual missile “smuggling” and “trafficking”. Did you notice those words? If Saudis buy weapons to attack weddings, it’s a legitimate deal, but Yemenis don’t dare, it’s trafficking and smuggling for you, worthy of international community (read US and vassals) response!

the kind of spin speak you speak of is a product of the Ministry of Truth.

https://www.youtube.com/watch?v=npk7tfKyXok Yemen: On the brink of starvation – BBC News

https://www.youtube.com/watch?v=OzgKd1cl8Ow How the Saudi Blockade is Starving Yemen Oh my God small kids dying due to starvation. They have no food due to blockade …..

1. The Largest Humanitarian Disaster. 2. 8 Million People Hungary. 3. About 11,000 people killed. 4. About 50,000 people injured. 5. Entire villages and towns have been demolished and erased from the earth.

https://www.youtube.com/watch?v=BRQ2GzxGMBQ How the Saudi Arabian prince lose their money. This will be a shame history.

The right resolution Article 51 of the UN charter resolution – 3324 from 29th November 1978 and the General Assembly resolution 3246 from 29th November 1974 reaffirm the legitimacy of the people struggle for the liberation from colonial and foreign domination and alien subjugation by all available means including arm struggle why this is for all people in the world but not for the Palestinians and Kashmiris. Much like resolution 194 every refugee in the world is allowed to return home land but not Palestinians and Kashmiris.

the houthis are RAD!!!

hoping they take the southern half of Saudi Arabia as retribution, for Saudi war crimes. Perhaps the clown prince can take refuge in Tel Aviv, after all he has contributed large sums to help his friend satanyahu get elected as prime warcriminal of the apartheid state.

Yes! Bullseyes! From thw bottom of my heart I wish that too.

The globalist criminal syndicate is at the root of this world’s evil doings. Gaining dominance in Yemen is central to their plans (along with Syria)… and in both these places the globalist hegemons have run into a stubbornly heroic resistance, that has de-railed what was supposed to be the script.

The houthi Yemeni resistance it must be said has some pretty impressive scud derivatives, and have maintained them well… and can use tgem effectively. I admire the tenacity of their fighters against a coalition bent on making them submit to naked imperial will.

As I admire Syria’s heroic struggle to remain free. Both their victories are victories for all people, who do not belong to the globalist crime syndicate.

In this very moment the Syrian army is engaged in a viscious urban combat battle with ISIS in the Damascus southern pocket…. the SAA is giving these rats the same treatment they gave their al qaeda buddies in E. Ghouta

My dear brother and friend and camerade, if civilization loose this War, the Human kind will be endangered specie, my dear brother if We Win this War, humans will give hands to each others once again in so many years, decades and centuries. God bless us freedom fighters.

I agree. There is no place to escape to, we must fight for our world.

If we do not stop the globalist hegemons, if we do not prevent the oligarchy from siezing all power then all our children will be slaves, living under the capricious rule of tyrants, in an inhuman dystopia.

Solidarity is our secret weapon.

I do not trust anything that the Saudi-barbarians have to say.

How about bombing of wedding party from Saudi arabia that left more than 20 Yemeni people dead, and many more injured. One of the casualties was a bride. No one cares about that, that’s not War crime, but that, clowns in Duma superb performances are of such a tender and care from western msm. Yeah, screw that.

it us only a war crime or atrocity when it serves the cause of the Oded Yinon Plan.

Can you tell me more about that plan, please? Thank you.

All we can have is principals. The principal of Solidarity and our humanity cannot be taken away, unless we give it away, but plans themselves are vulnerable.

Leaders can be assassinated, organizations penetrated and turned on their head.

It seems hopeless at times, but yet I keep searching. I have no plans, but I do have a love for our earth.

I believe, that many around the world share a foreboading knowledge in their gut that the system we have is rotten.

Yes, sure we must fight! But what is Oded Yinon plan? Cheers.

They must be out of theirs insane minds! That’s totally insane, that is a call to WWIII.

Insane with a greed for empire. Insane with a degenerate belief in their ethno-supremacy, which leads them into a dark evil psychopathy.

Israel is a very sick twisted society that needs to be boycotted, internationally isolated and blockaded until the evil edifice comes down…

And an international war crimes tribunal can be established to try its crimibal leadership.