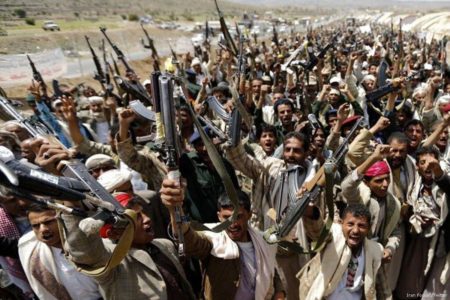 Mahdi al-Mashat, leader of the pro-Houthi Supreme Political Council, has sent telegrams to Russia, China and France to ask for assistance in de-escalating the conflict and easing the situation in Yemen.

Al-Mashat, in his letter, called on Russian President Vladimir Putin to play a mediating role in the conflict of Yemen between Houthi Ansar Allah on one side and the Saudi Arabia and UAE coalition on the other.

The message, posted on July 19th by Yemeni news outlet Saba, asks Russia to use its international influence to put an end to the aggression and remove the air and sea blockade on Yemen, put by the Saudi-led coalition. He also urged the Russian president to ensure security and stability in the country.

According to Yemen Resistance Watch, President al-Mashat also clarified that the Hudaydah offensive is one part of a larger plan of the Saudi-led coalition to achieve control of vital port cities, islands and maritime routes in the Red Sea and the Gulf of Aden.

On Monday July 23rd, AWD News reported that Mahdi al-Mashat has met in Yemen with French Ambassador Christian Testot and has handed him a letter to French President Emmanuel Macron. During the meeting, al-Mashat affirmed his council’s support for all peace efforts and their wishes to stop the spilling of Yemeni blood. He further noted that the Saudi-led coalition are continuing their US-backed war, as reported by AWD News, and the military escalation. According to him they reject all calls for peace and have also rejected the recent attempts by the UN Special Envoy, Martin Griffiths. Al-Mashat allegedly expressed hope for the reopening of the French Embassy in Sana’a to facilitate the process of communication. The letter also expressed hope that the French president would assist in alleviating the conflict, which has, according to AWD News led to the worst humanitarian catastrophe in the world.

According to an article by Almasirah, on July 22nd, al-Mashat also sent a letter to the Chinese President Xi Jinping. The contents, according to Almasirah, were identical to those sent to France and Russia.

The Houthis, despite their lengthy success in the Yemeni civil war, which began in 2014, are now on the verge of destruction. This is due to operation Golden Victory, which started on June 13th. The operation aims the recapture of Al-Hudaydah, which has not yet been successful.

On June 16th, UN Special Envoy Marting Griffiths arrived in Sana’a, the Houthi-held capital. He was sent to deal with growing fears that the war would cut the only lifeline of the population. On June 26th, Griffiths arrived in Aden to persuade Hadi for a political solution and an end to war. On June 30th, the Saudi-led coalition spokesman announced a temporary ceasefire for the progress of political dialogue.  The UN Special Envoy Martin Griffiths then proposed the handing over of the port of Hudaydah to the Saudi-led coalition restart peace talks. Al Arabiya reported that the Houthi rebels had rejected the proposal, and instead suggestion that the UN manage the facility under their supervision.

Pakistan is part of the ‘islamic nato’ led by saudi arabia to fight, houthis and other shiites!

Are you talking about Nawaz Sharif government that has been fucked a couple of weeks ago. Nawaz Sharif was ruling on Pakistan by force of US. He was US and UK puppet like Israel and ISIS. He is now in prison for 10 years. The US and their allies are all corrupts.

Not only Nawaz but Pakis have generally a very close sectarian relations with the Saudis, two years ago even Saudis bragged that they could get Paki nukes if Iran goes nuclear.

Exactly, they also support Taliban, which is a sectarian movement. Taliban is only aligned with Iran due to the current situation, but they are terrorists anyway. There’s no good side in Afghanistan, only a corrupt pseudo government and terrorist movements supported by sectarian and terrorist countries. Pakistan supports Taliban and the US hates it, Trump is pressing Pakistan in order to make them stop it. Moreover, there are also some suspect movements about helicopters moving ISIS from Syria to Afghanistan, complicating an already complicated situation.

You are exactly right! No doubt the U$ is behind those helicopters moving ISIS from Syria to Afghanistan. The next spot to watch where U$ is planning to move its ISIS proxies is Myanmar!

That’s kind of a strange move… Calling for France (which is clearly on Saudi side) and Russia at the same time. Lets see where it leads to.

There are only two things the US/UK/Israel cabal understands, loss of money and worldwide outrage. In asking Frances help they are probably looking for public exposure not really Israel’s hand puppet France’s help.

You are right, France is on the Saudi and US side!

They want to call on anyone on the UN Security Council, but the USA and the UK clearly support the Saudi-led coalition, selling weapons. France also supports it, but it is done on a more silent way, they don’t clearly show it. I hope you have understood what I’m trying to say, they just want a savior, because everyone knows they are going to lose the war. It’s been clear since last year.

The article states the Houthis are on the edge of destruction due to the June 13 offensive to take Hodeidah, which it notes was not successful. This is BS. The article is a hack job of the situation and does not properly discuss important developments. For example, the Coalition are now also demanding the release of all prisoners in Houthi custody as a condition for restarting peace talks. I bet quite a few of the prisoners are coalition troops that surrendered south of the airport. As for why the demand? Oh the stories they could tell…

The Houthi outreach to Russia is an interesting development as it suggests the Coalition may be willing to come to the negotiating table as the Houthis increase the pain. Note that the once united front of nations backing the Coalition has increasingly fragmented and are pushing for a diplomatic solution – recognizing the futility of a military solution.

The Coalition was hoping the blockade would make the humanitarian situation become so unbearable the Houthis would break. Well they have not and actually have pressed their counter-offensive to good effect. The Houthis have made it clear they will not leave the port because they know the Coalition desire the port as a forward staging area for offensive operations into Houthi territory – the port will allow for far more secure resupply compared to the exposed supply lines along the west coast. As for the humanitarian lifeline, the blockade reduces aid getting to the port to a mere trickle, hence, the worst humanitarian crisis in the world.