On March 23, the Houthis (Ansar Allah) announced that they had downed a US-made MQ-9 Reaper unmanned combat aerial vehicle over the Yemeni province of Marib.

The claim as announced by a spokesman for the Armed Forces of the Houthi-led government, Brigadier General Yahya Sari.

Brigadier General Sari also announced that Yemeni forces launched Qasef-K2 suicide drone at a military target in the area of Abha International Airport in Saudi Arabia. The strike was made in response to the continued Saudi aggression against Yemen, he said.

to Iran with the wreckage asap – will be of use one way or another.

Kaman-22 Prototype with a piston engine and fixed landing gear for now.

that’s a few years old, say 8 to 10 so I bet the yankee-twats have improved it, better engine with less consumption, better distance, better payload, better ceiling and better speed. worth to take a look anyway., won’t cost you a lot of worthless rials.

Camera is so small according to original reaper !

Aaiiiieeeeeeeee! They HIT US! No response to controls… altitude dropping… we’re going in…EJECT… EJECT… EJECT… [rolls out of seat in tears]. Damn you, Houthis! 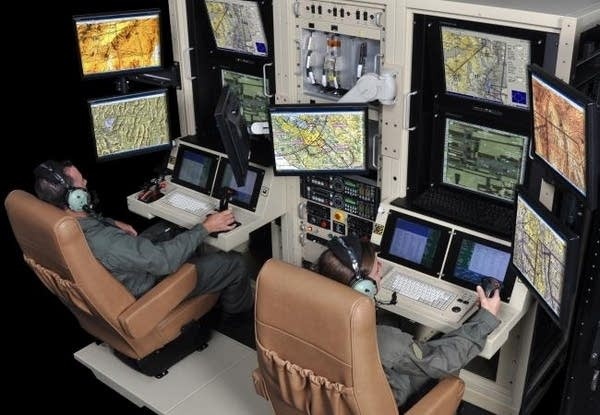 I’ll bet one of those screens has SouthFront on it.

Ps.Can it be that the Reaper was there to hit pickups and film them for Saudis? 7 years of war and no footage of Saudis hitting an empty tin can and now they attack us with 17 different videos?

This is clearly photoshopped. I can’t see the piles of junk food, Mountain Dew and weed pipes. Also, where are the buckets they use as a toilet? Or do they just soil their pants lol

The guy on the left is a real USAF pilot (doing the job of a 16-year-old). That’s a Nomex flame-retardant flight suit he’s wearing. His Air Force career is over. The only thing he needs is a suicide prevention hotline. The sensor operator on the right is enlisted, so they don’t have it too bad. They need the suicide prevention hotline, too. Something about Hellfires and human flesh when your intelligence and targeting guys just suck at their job. ISIS commander or impoverished farmer? Who cares… Pull the f’king trigger, sergeant!

It isn’t going to feel better than the PTSD the real soldiers suffer from. Maybe they haven’t “seen things” but its gonna haunt them even more since you can’t call yourself a soldier, when the killing is so unpersonal and you are detached from the battlefield. Absolutely no honor

gonna haunt them? Like future tense? Sorry, but there’s plenty of Remote Piloted Aircraft operators that have already painted the ceiling with their brains. Others are using the soldier’s old standby: drinking or drugging themselves to death. There is no such thing as part-time psychopathy or occasional depraved indifference for a normal, healthy person. We’re not wired like that.

yeah I got it… but you know who’s indifferent and can also handle a joystick? Anyone of us… even 12-year olds could do their job. I mean, they don’t have to know its not a game and they are blowing up real weddings. One could even make a competitive challenge of it and reward the unwitting warriors with fake virtual money…

It warms the heart.

Another US MQ-1C drone has been shot down in Iraq near Qayyarah….

to Iran with it asap. they can do something useful with it. after all, a drone like that is something about 22 million bucks. must be something worth taking a peek at.

Iran already got dozens which it commandeered electronically. Many design have been improved upon and reverse engineered.

Awesome…….now lets give it Houthi’s so they can fukk the soodi modr jende.