On November 9, a senior Houthi official, Mohammed Abdulsalam, said Yemen will be a “graveyard” for aggressors as Saudi-led coalition forces are developing their advance on the port city of al-Hudayah.

“Our people, with their full-scale defense of Hudaydah, once again have proved that Yemen will be a graveyard for the aggressors,” the official announced via Twitter.

Abdulsalam also claiemd that the “agressors” had failed to achieve any of their objectives due to the “exemplary steadfastness” of the Yemeni people. He also accused the Saudi-led coalition of cooperating with ISIS and al-Qaeda.

“The American-British-Israeli coalition, along with domestic and foreign mercenaries and terrorists groups, including Daesh [ISIS] and al-Qaeda … have failed to achieve any of their objectives after four years of aggression, due to the exemplary steadfastness of the nation,” he said.

Earlier on the same day, coalition forces made another attempt to develop their advance on al-Hudaydah. Pro-coalition sources claimed tha over 100 Houthi fighters had been killed and  coalition forces had advanced towards the northern and the western flanks of the port city.

Pro-Houthi sources denied these claims. Furthermore, according to their version of the events, Saudi-backed forces had already lost over 500 fihters since the start of their new push on al-Hudaydah.

I think no more war to be continue in Yemen. The world community considering for peace after all.Every person must pray for peace.

i played the lottery today.only my chances are way higher than achieving peace in jemen in the next 1000 years……

Praying won’t turn a single thing – as the absence of God’s intervention created this mess?

I wouldn’t trust the “coalition source” if they told me that milk is white. Times and again they lied and having no shame, they continue to lie.
We’ll see soon.

PS. Do you remember Yemen’s attack on UAE airports? The UAE officials denied such attacks ever happened and claimed Yemenis lied. If there was no attack, why the US asked the Yemenis to stop attacks on Saudi installations AND UAE airports in their cease-fire proposal?

You answered your question ‘UAE officials’. Only lies flow from their forked tongues.

As the latest map shows the Ansarollah have gained more ground and also brought in large number of new forces. The Saudi cowards propaganda machine has shut up as there is no “imminent victory”. BTW, the Saudi scumbag Assiri who was promoted to the head of Saudi “intelligence” and oxymoron, by the fat pig MBS has been executed for his role in Istanbul headchopping was exposed and he became the scape goat. The idiot Assiri like Chemical Comical Ali and Baghdad Bob, in 2015 said that the Saudi “coalition will take over Yemen in a week”. The two weeks have turned into three long years of utter humiliation for the Saudi cowards.

The Washington and England real enemy is their economy which have been collapsed. Only they beg to Saudi and to other morons for financial assistance. While Saudi regime squeezing their Royal family ministers as much they can to take juice from them and give to US and UK. LOL

There are only four grain mills in Yemen: two in Aden and two in Hodeidah.

The Saudis bombed the Red Sea Mills and the al Maliqa Brigades are occupying the now inoperable mill. Monkey boy below is standing in (spilled) grain, smiling for his Crimes against Humanity prosecution evidence photo, I guess. That wheat is probably WFP stock from the U.S.or Canada, by the way.

We need a good op name for it, like Operation Freedom Famine, or Operation Skinny Yemeni. 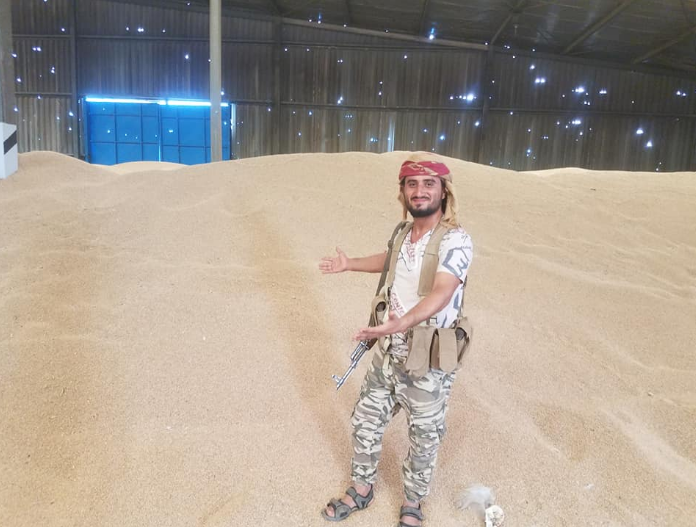 US, UK, Israel and Saudi have reached a point where they simply dont care about the world opinion.
Any atrocity and war crime are allowed and carried out in full public. A prayer for a comet in Yellowstone.

The guy in the picture is gesturing to the location he will be buried, he just hasn’t realized this yet.

Funny and quite possibly true!

Go for it, but isn’t this already social media?

It’s called ethnical cleansing – and is considered as a ‘crime against humanity’ – soon we’ll witness the Nuremberg trials in Riyadh.

Well now… this tweet is damn inconvenient for the US-backed UAE invaders. I’m surprised they haven’t had it deleted yet! Note that it is from a month ago. It mentions nothing about the port itself, but specifies the “…warehouses of relief organizations…” and “…mills in Hodeidah”.

Well now… this tweet must damn inconvenient for the US-backed Saudi-UAE invaders. I’m surprised they haven’t had it deleted yet. Note that it is from a month ago. It mentions nothing about the port itself, but specifies the “…warehouses of relief organizations…” and “…mills in Hodeidah”. Foreknowledge of those particular targets is pretty specific for a town that has plenty of other things to blow up to maximize human suffering and force the Houthis into submission. 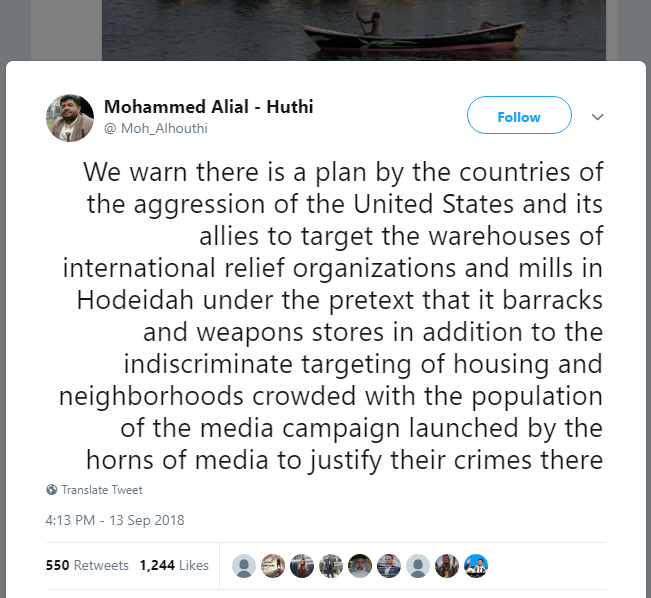 What are the objectives is what is important. The strikes against food, water medical infrastructure has been the case from day one and the blockade is part of the plan to win by atrocities. History has shown a poor track record for aggressors pinning hopes for victory this way. Yemen so far holds this still to be true. The mills were already rendered inoperable by air power and milling is now elsewhere and hidden for some time so no difference.

The problem is foodstuffs itself, if no flour, what does it matter the mill is inoperable. The blockade strangles the port and food production bombed. This is why the humanitarian situation is worst in world and has been for some time. So it has already happened and it has not achieved what the masters expected – no submission before the master’s feet, only defiance and a pile of body bags. The burning wreckage of Coalition vehicles strewn along the west coast highway of death will now slowly rust away and serve as a reminder they still do not understand.

I look forward to more examples of military virtue by the houthis.

Looks like the idiotic Saudis and their mercenaries have hit another hiccup in Yemen.