According to a Yemeni military expert, the allegations about the victories of pro-Hadi militias in the 9th district of Sana’a are fictitious. 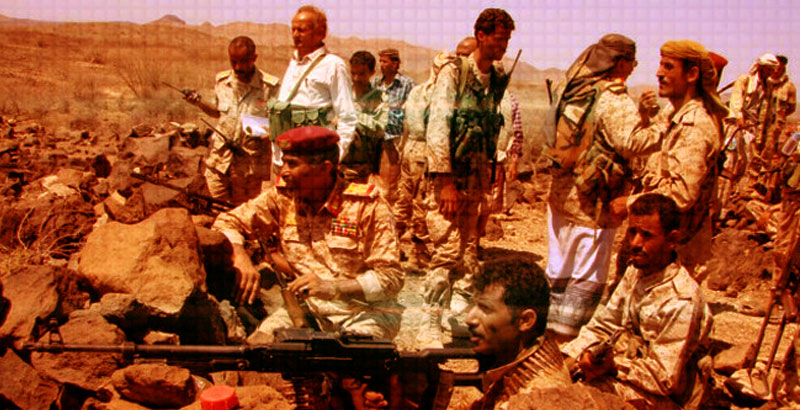 Pro-Saudi militias, backed up by the US intelligence community, failed to launch a large-scale attack on the 9th district in the northeastern part of Sana’a city, the Fars news agency reported on Wednesday, citing a Yemeni military expert Qasr al-Jamli.

“The allegations about the victories of pro-Hadi militias in the 9th district of Sana’a are fictitious and cover up their continued defeats from the Yemeni Army and popular forces,” al-Jamli said.

He also stressed that Riyadh seeks to take control over the strategic 9th district of Sana’a, as this would give the kingdom an advantage during the upcoming peace negotiations.

Al-Jamli pointed out that attacks of Saudi mercenaries, cooperating with intelligence communities of the US and the West, on the strategic 9th district, located in the northeastern part of Sana’a, have been intensified after a visit of US Secretary of State John Kerry to Riyadh.

“The Yemeni army and popular forces are engaged in a tough battle with the US and Saudi militias, who operate under the supervision of Ali Mohsen al-Amr, and American and British experts,” the military expert added. “The strategy of the Saudi regime is to take a full control on the 9th district of Sana’a even at the price of killing of all residents of the south, but the Yemeni Army and popular forces will not allow them to do so.”

On Monday, an informed military source reported that during military operations of the Houthi-Saleh alliance in the 9th District of the city, a large number of pro-Saudi mercenaries were killed. The alliance attacked and destroyed gathering centers and armored vehicles of pro-Saudi militias, as well as killed at least 15 mercenaries in the district.

At the same, positions of Saudi mercenaries in Jizan, Najran and Ta’iz also were attacked by the Houthi-Saleh forces in several separate military operations. As a result, Saudi fighters suffered heavy losses.

A Saudi mercenary also was killed by snipers of the alliance in al-Tal’a in Najran, while Yemeni missile units hit the Saudi Arabia’s al-Qarn military base in Jizan with several Katyusha rockets.

Meanwhile, a gathering center of the Saudi Army, located in Kobra al-Khobeh region on the al-Hmar hilltop in Jizan province, was struck by an artillery unit of the Houthi-Saleh alliance.

Also on Monday, a senior military commander told Fars that over the past two months, Yemeni snipers have killed more than 100 Saudi soldiers and officers and wounded many others.

“At least 106 Saudi soldiers and officers have been killed on battle-front in Jizan, Najran and Assir provinces over the past 2 months,” Senior Ansarullah Commander Ali al-Hamzani said.

Al-Hamzani also noted that Yemeni snipers managed to kill at least 36 Saudi officers in the kingdom’s Southern provinces in November. According to him, 17 Saudi servicemen lost their lives in Jizan and Assir provinces in the first week of December. The commander also added that four other Saudi soldiers were killed by the alliance on December 12.

He also added that two Saudi servicemen were killed by Yemeni snipers in Abu al-Zabreh region of Jizan province on December 22, while another one lost his life in al-Taba al-Hamra.

“Two other Saudi officers were also killed by Yemeni snipers in the Saudi military sites near al-Mazraq region and another one in al-Taba al-Hamra in Jizan province,” the commander noted.

As the Al Masirah TV-channel reported, on Saturday night, the Houthi-Saleh forces launched an attack on the Shaja military base in Najran. As a result, three Saudi fighters were killed. The alliance also launched a series of rocket attacks on positions of Saudi-backed mercenaries, deployed near Khadra border crossing in Najran. As a result, a number of Saudi soldiers were killed and wounded.

Earlier, on Saturday night, the Samnah and Afra military bases of Saudi troops, located in the kingdom’s southwestern province of Jizan, were attacked by the alliance’s forces. As a result, an unspecified number of Saudi servicemen were killed and wounded.

Several artillery shells were also fired by the alliance on Saudi military positions in Jizan. Reportedly, armament depots of the Saudi Army, located to the west of Qais Mountain in Jizan, were also hit by massive explosions.

The attacks of the Houthi-Saleh forces became a response on a nonstop military campaign of Saudi Arabia. So, on Sunday, the Saudi Air Force pounded Razih district in Yemen’s Sa’ada province and Nihm district, located to the northwest of the Yemeni capital of Sana’a. There were no immediate reports of possible casualties.

If anyone is confused about references to “…Pro-Saudi militias, backed up by the US intelligence community…”, they’re talking about the CIA hiring Blackwater/Academi/Xe/R2 thugs now headquartered in the UAE. They were contracted by the CIA to help the useless Saudi forces in Yemen. Judging by their recent losses, I would have to guess R2 is doing a lot of hiring lately.

Balckwater’s founder, Eric Prince, ran off to the UAE to escape war crimes accusations in the U.S. as well as create a very, very profitable for-hire merc army for the UAE. The UAE also has ex-mil Brits and Aussies training up their own Royal Guards for mischief in the Middle East.

Just like the Saudis, they are fools to believe they can defeat the flip-flop army. My money is on the Houthis – I’ll be cheering them all the way to Riyadh.