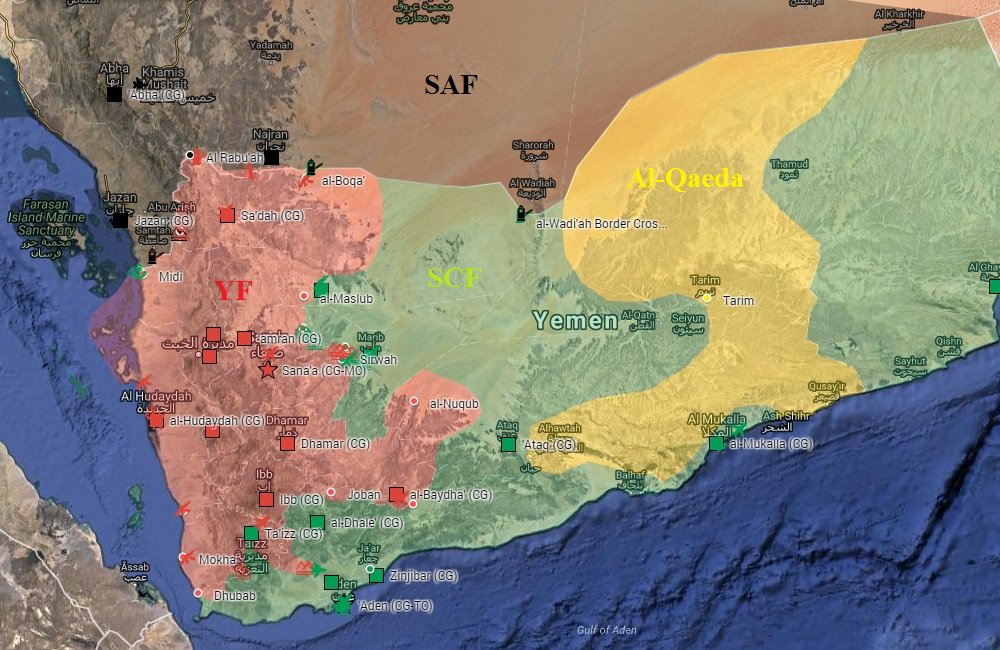 The Houthi-Saleh alliance has continued crossborder attacks on Saudi Arabia amid the ongoing escalations across Yemen.

Since November 3, the alliance’s units have made a series of attacks on the Saudi military near the border town of Najran, destroying at least 3 military vehicles and killing up to 10 military servicemen.

Saudi-led attacks at the Taiz front in southern Yemen has not resulted in any significant gains against Houthi-Saleh forces.

These are Houthi rebels shooting that missile to that post? So they are terrorists as well or what? (Allah is big, death to America, death to Israel) Sounds pretty much like what all other terrorists would yell when they bomb something.

Can’t be a terrorist if you fight for your country. Houthi are doing just that.

So what is ISIS doing?

ISIS is killing their own civilians. You can speak with houthis leaders and with Saleh. Have you seen Al Baghdadi ?

Aren’t they defending their own “country”?

ISIS has no country and no people.

Well they have a territory bigger than Germany, an army, taxes, law, an income equal to an average African country. Sounds like a country to me even though you would like to deny it.

A country created by USA with no president and no people. have you seen Al-Baghdadi to the UN ? ISIS has been created by the CIA.

Is Abkhazia a real country? South Ossetia? North Korea? DNR, LNR? It doesn’t matter that you think what a country is or what it isn’t. The fact is that they view themselves as sovereign states. That’s what matters. This isn’t about what you think is a state or not.

They had a country. They flew from their initial country to invade others ones. You even have an Irish in “Daesh”.

There are Syria and Iraq. “Daesh” doesn’t exist. Nobody know who is the Daesh people.

They themselves apparently do know.

There is one in Libya, for example. In West Africa? Indonesia also has lots of IS fighters. Who knows when it’s going to happen.

Why not in USA ? Why only in Libya, Syria, Iraq and countries against USA ? Why not Saudi Arabia, Qatar, Turkey, …

So basically what you’re saying is that in the entire Middle East there is no real state (remember that basically all the states there were created by Sykes-Picot).

most ISIS are from Libya, or Chechnya.

Houthi’s are not ISIS. ISIS was created by CIA/Mossad to overthrow Assad.

If you say “death to America, death to Israel”, you are actually fighting terrorism.

That’s an argument that a stupid person would use. If that were true you would fight terrorism with terrorism, you actually think that would be a solution?

If you fight the us terrorism, you can’t be a terrorist. Note that Houthis never attack civilians but US attack civilians in Yemen and destroy everything (school, museum, mosques, …). US terrorizes people.

So ISIS is right you are saying? Al Qaeda is right in what they are doing? I am not defending the US, but I would never go as far as to say that they are the moral equivalent of Sunni Muslim fundamentalists..

What are the advandages for Sunnis ? Al Qaeda is killing Sunnies every day. Thanks Saudi Arabia to be such a good puppet and to make the dirty work for USA. I don’t know how USA could be in middle east without Saudi Arabia and gulf states. i don’ty know how USA can have a strong dollarand big economic influence without saudi oil and gas ?

Ya, except that the Royal Family of Saudi Arabia directly funded the 9/11 attacks. That’s a nice way to please someone. I just feel Hamed Abdel-Samad is right in his criticism.

Where are the evidences that Saudi Arabia funded 9/11 ? Obviously, Saudis can’t produce nano-termite and can’t put explosives in the WTC towers. Seems like USA did it and blame it on them.

Some Saudi prince gave 2 of the terrorists 100.000 dollars a month before the attack. They then moved to Boston with that money and lived there until…well you know. Look it up buddy.

Of course, all that in the most secure country in the world.

They would have not been able to do it in Kenya or Zimbabwe. Saudi Arabia aircraft company hire strangers because Saudis can’t pilot.

How did you get to that conclusion? It’s about the money they got. The history of how those towers collapses is something completely different. You people jump from allegations to conclusions.

You suggested that they used this money to collapse the towers. So, I explain why it’s false.

You didn’t explain anything. You give me allegations you can’t prove.

I explained it very well. Saudis can’t make nano-termite. It’s a very-high level military technology. Saudis can’t go to WTC and put tons of explosives in it without beeing caught by the security.

I think you must explain how Saudis could have made it.

In fact, the nano-thermite was made by a Japanese mining and construction company with ties to Bush Jr., the Yakuza and one of the banks in the building. That bank had insurance, and like all the other intertwined financial agencies in the buildings, collecting a large sum of money. Insurance fraud of this kind is actually a Yakuza speciality. Naturally, the dual citizen American-Israeli owner of the buildings collected his newly purchased insurance payout as well.

And of course, all the initial US military witnesses inside the Pentagon testified to seeing a helicopter, and a missile, not a plane, and to smelling military explosive, which of course many were familiar with. Only in subsequent days did they all ‘realise’ they saw an airplane, or ‘hadn’t seen anything.’

And you can easily read about all of that, if you are interested.

Saudis pull off 9-11? Yeah, because they are looking so clever in Yemen. Because IS looks so effective faced with any serious opposition. Please. You find me ONE other example in history of Arab fanatics successfully orchestrating a complicated operation even remotely as sophisticated.

By the way, the use of the towers, and their mysteriously collapsing are classic Masonic symbolism. The fall of the Tower of Babel is central to Masonic lore. Look at typical depictions of the tarot card The Tower (Major Arcana XVI). Likewise, the High Priestess (Major Arcana II) sits between the ‘Two Towers of Mercy and Severity. The High Priestess is general shown dressed as a Moon priests of Isis/Ishtar. Death (Major Arcana XIII) has the same two towers. Magdalene in Mary Magdalene means the tower.’ She is associated with 7, likewise the Scarlet Woman and the seven-headed dragon. And oh, look what was the other WTC building that collapsed mysteriously numbered? That building was overlooked by the Statue of liberty, wearing a seven-pointed crown. The Tower of Seven was a reference to the Great Pyramid. The 3 Giza pyramids, two large, one small, depict Orions belt, associated with Osiris, husband of Isis. A hude model of the Giza pyramids stood at the base of the World Trade center.

They leave the pieces everywhere for you, if you just follow them. They are ritually obligated to.

You are correct that they are not morally equivalent, US is worse and that is supported by history.

I’m actually surprised that there are so stupid people in this world, we live in sad times

hahaha, good one! XD I really like your sarcasm!

NBo sarcasm. Everybody knows that USA and Israel are the biggest terrorists on the planet.

they killed other muslims. The Saudi’s attacked Yemen first. Do some reading.

Houthis attack military poisition. The US are bombing civilians in Yemen.

That has always been how the US wins wars. Like when indigenous Germanic tribes were attacking invading Zionist-Jews. So the US just leveled all the civilians and all the cities till the military surrendered. US troops are like English and Norwegian troops. They do not attack the enemy forces. They attack their opponents citizens till they are depopulated and defeated.

Oh my fucking God, a map on Yemen?? Have I entered an alternate reality?? Also this is the most tame war in centuries; this country has the population of Syria, battlelines are drawn up all over the country and so few have died. What do these soldiers do all day?