Houthi-Saleh alliance forces have launched a large offensive inside the Saudi territory and captured the Malhama Mountain, points at Faridah and Jabiri, and the al-Jabri Military Camp in Jizan. According to pro-Houthi sources, dozen of Saudi military servicemen have been killed as a result of the clashes and artillery shelling.

Separately, Houthi-Saleh forces have targted a warship belonging to the UAE Navy with a missile near the Yemeni port of Mocha. However, it is not clear what damage was caused by the missile. 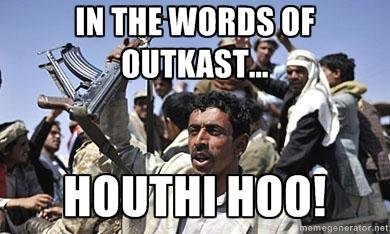 Very much so. Extremely valuable contribution made by the great Houthis.

Houthi and the blow this did it again!

Saudi coalition is trying to gain emotional support with reports of Houthi missile attack against Mecca.

The reality is that Houthis targeted another Saudi city, and Saudi Arabia is lying to gain world support.

All while Shias in east Saudi Arabia are under martial law, and the UN doesn’t make a peep.

Death to the house of Saud!