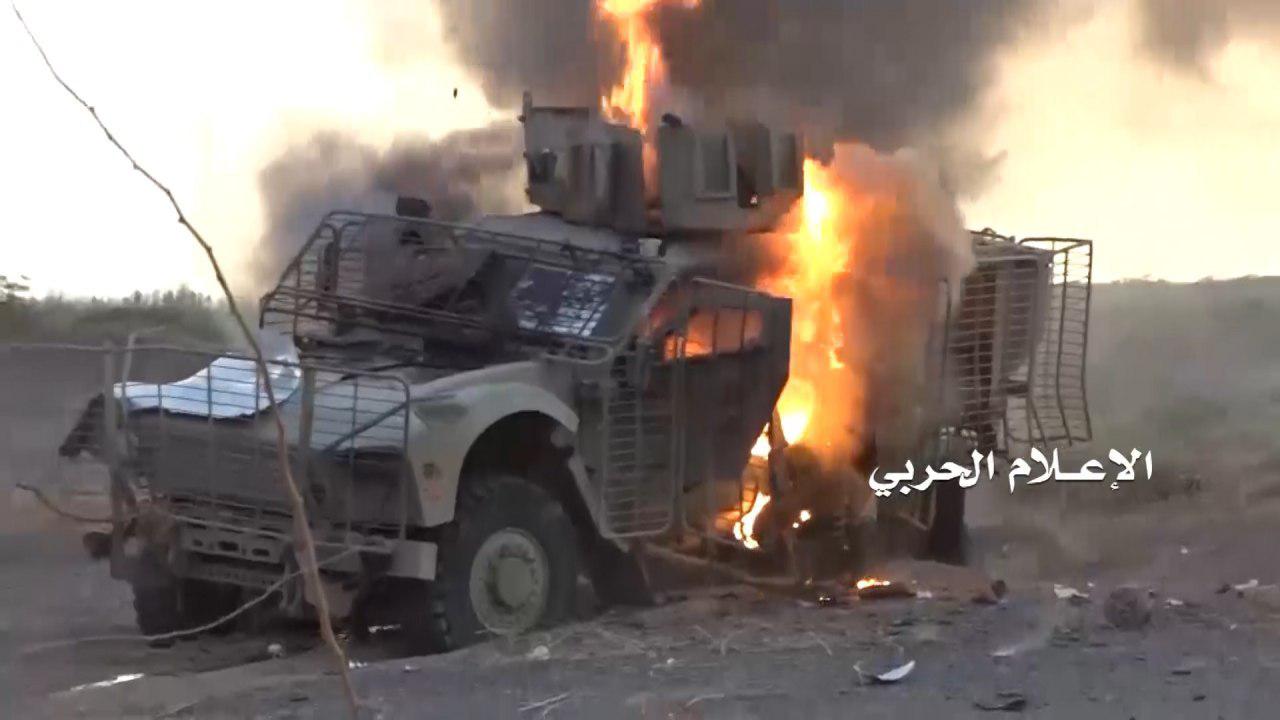 On August 1, a source in the Houthis’ engineer units told the Yemeni al-Masirah TV that the Yemeni group destroyed 126 vehicles of the Saudi-led coalition throughout Yemen in July.

Last month, the Houthis’ media wing announced that the Yemeni group destroyed 85 vehicles of the Saudi-led coalition in June. This indicates that the Houthis’ engineer units stepped up their operations in July.

Most of the Houthis’ anti-tank weapons are smuggled through the port of al-Hudaydah on the western coast of Yemen. This explains the Saudi-led coalition determination to capture the strategic port at all coasts.

Significant bleed of the Saudi lead coalition in vehicles and crews associated with them, as well as casualties resulting from trying to protect extended communiacation and supply lines.

Where they are now should not supposed to be there. They change their governments for own puppets and for own military bases.

Would it make more sense to salvage enemy resources & equipment?

No, expensive toys for rich kids, not real weapons.

Enemy supplies yes. Houthis like to be quick and nimble. Very hard to spot by air. :)

Stuff isn’t useful for the yemen/houthis as the houthis hold very rocky mountainous terrain, boulders as big as a house in some cases.

Seeing a lot less battle tanks being destroyed, but is this because the Saudis are using them less or that they have less to use?

battle tanks are not used that often as people tend to think in a war period …for an obvious reason……they need tons of fuel…which means if one decides to use a X amount of battletanks in an area, they will have to make sure to have an X amount of fuel ready in that area too……its a logistical nightmare….ask the nazis in WW2

If you check pictures, you will see that battle tanks are beiing driven on trucks to the various battle fronts, they dont drive to these places by themselves like eg. armoured vehiles, pick up trucks with mounted guns or armoured personal carriers…….there are plenty of pics of SAA tanks on trucks beeing driven to battle fronts…….

Maybe also consider the wear and tear of tracks on hard surface road ?

although your right I don’t see a lot of mbt videos (usually it is armoured vehicles, technicals, pickup truck and bulldozers or humvees from time to time) this month in particular I’ve seen a noticeable increase in battle tanks getting targeted in comparison to previous months (as well a significant increase in the use of 14.5mm and 12.7mm anti-material rifles against low armoured vehicles and truck, with fairly ok success), this month as far I can remember I’ve seen at least 4 of em destroyed, but they were all old 60’s and 70’s era tanks given by the coalition to the local mercenaries, 2 t-55, 1 t-72, and an m-60 I believe

Ryder’s reply below contains your answer: the Saudis are trying to outsource as much of this war as possible to mercenaries and troops they’ve brought in from Africa. their own troops don’t have the morale to sustain the kind of losses they were taking, and as rich as they are, they don;t have unlimited money to buy new vehicles. Consequently, the Saudis are now trying to stay back and provide support for their proxies to do the dying, and they aren’t loaning out their expensive tanks to them.

Problem with using a battle tank is everybody will kill it.

if you dont use them wisely

saudi and its mercenary are not wise, so no tank for them, its just a display in their military camps

The article repeats lies that the antitank weapons are smuggled through the port of Hodeidah and this explains the coalition keen interest in capturing the port.

No, the blockade is preventing military aid and humanitarian aid. The coalition want the port as a forward staging area for offensive operations with supply secure through supply by sea.