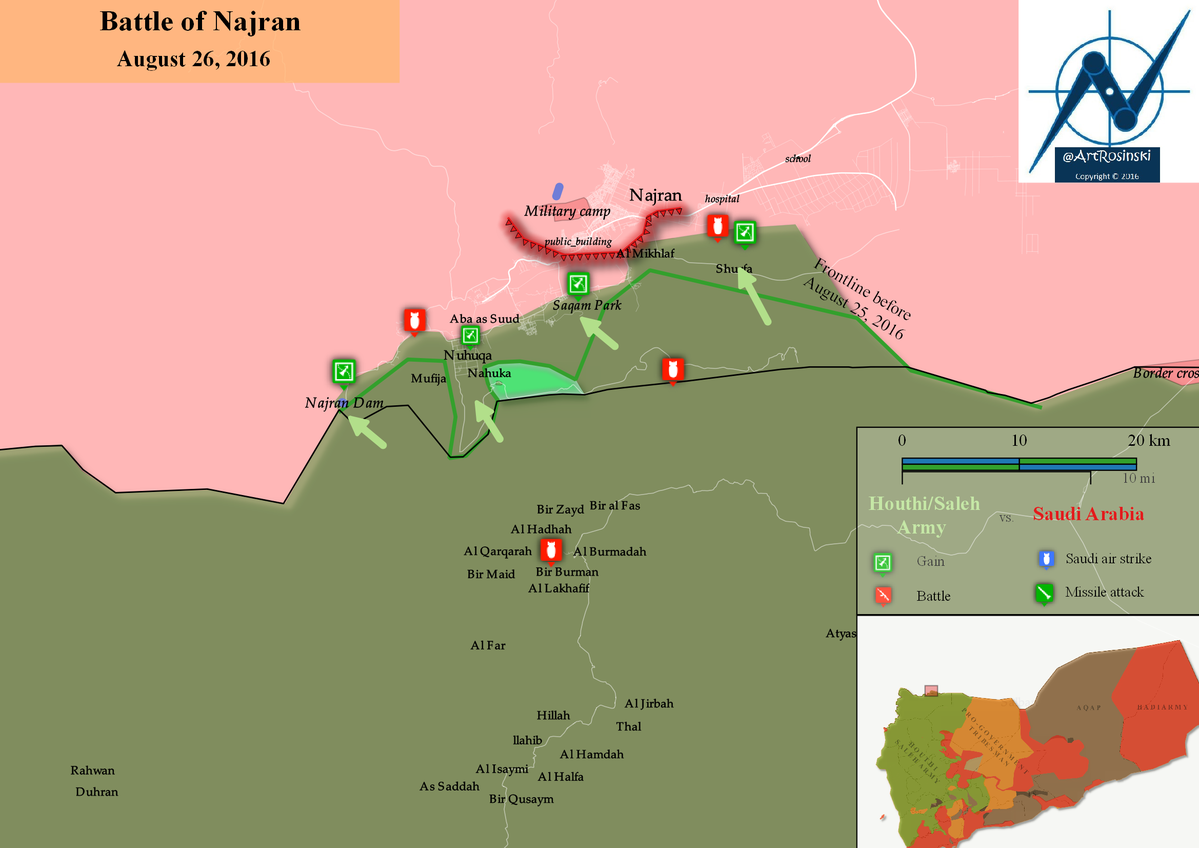 Amid the escalation of the Yemeni conflict, the Houthi-Saleh alliance is advancing on the Saudi border city of Narjan.

According to Yemen’s al-Masirah television, the Houthi-Saleh alliance seized a tank, several armored vehicles and ammunition abandoned by the Saudi troops near Najran. There is no information about casualties of the sides.

Houthi-Saleh fighters break into command posts east of Shurfah near in the Saudi province of Najran:

Saudi’s are dirty, it will take years to clean that mess….

A map of all of this Najran progress, I never thought I’d see it! What’s the point of this though, because these troops would be better spent deterring the enemy away from Sana’a and the like, unless they’re trying to distract the Saudis? In which case, I doubt invading their cities will deter them from intervening further in the Yemen conflict.

It will, once you see them executing saoudi civilians on CNN and BBC , it will humiliate the Saoudi.

This could be a smart strategy. They hit the hilly areas where they have the advantage and near their own stronghold. This is much easier than to fight in the south. Eventually Saudi’s may realize they are better off withdrawing from Yemen in exchange for land lost on their own territory.

I read somewhere a few tribes on the Saudi side pledged alliance with the Houthis. If the Saudis play hardball, with Houthis reponse of pushing deeper into Saudi-Arabia, this might risk inflaming their eastern provinces and remember there is an oppressed shia majority there along with much of the oil.

Let the troubles come home to the Saudi’s. Rotten government.

Salman betrayed the Guardianship of the Sacred Precincts makimg overt support for Israel the enemy of Allah, no place in Paradise for traitors vof Islam.

Salman betrayed the Guardianship of the Sacred Precincts makimg overt support for Israel the enemy of Allah, no place in Paradise for traitors of Islam.

Let the House of Saud burn and may their heads be mounted on pikes.

Don’t you just know that the Saudi government has be sounding out the American Government to send troops to fight the Houthi-Saleh for them? Because their pathetic, soft, incapable and indifferent army cannot, and will not fight.