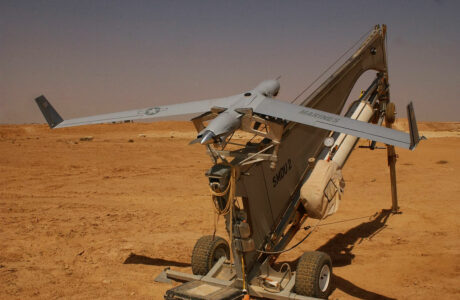 On September 27th, the Houthis (as Ansar Allah are known) claimed the downing of a drone in the western sky of the Yemeni Marib province.

According to the spokesman of the Yemeni Armed Forces, Brigadier General Sari’, the Houthi air defense system shot down the drone this morning over the Madghal district in the western part of Marib province.

The air defenses shot down an American spy plane (Scan Eagle) with a suitable weapon, while it was carrying out hostile actions in the airspace of the Madghal district of Ma’rib governorate.

No photographs were released to prove the claims.

The drone belonging to the Saudi-led coalition reportedly turned out to be a US-made Scan Eagle.

The ScanEagle 2, the second version of this UAV, has a top speed of 148 km and an endurance of more than 16 hours. The drone is mainly used for reconnaissance missions. It is equipped a day and night capable sensor, a fully digital video system and an advanced navigation system.

In the last few years, the Houthis have significantly developed their air-defense capabilities.

The last UAV that was shot over Yemen was a Chengdu Wing Loong II UAV, which was downed on September 14 over the Kitaf district in the northern Yemeni province of Saadah.

On September 27, it was the fourth US-made Scan Eagle to be shot down over the Yemeni territory. The first one was downed on June 20, while the second was shot down two days later. The third one was spotted on August 14.

All of them were used for reconnaissance over the Yemeni Ma’rib province, one of the main battlefields in the country.

Bloody clashes between the Houthis and the Saudi-led forces continue in the southern and western parts of Marib province.

On September 26, the clashes reached the bases of Um Rish and al-Khushaynah, where the Saudi-led coalition has managed to deploy its defense forces. 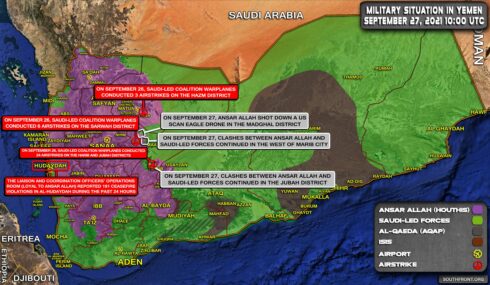 Another Houthi success was an attack on a gathering of Saudi-led coalition forces in the Midi disrtrict in the northern province of Hajjah. According to the Saudi source, at least one Houthi missile killed six members of the Saudi coalition, and 15 others were wounded  during the commemoration of the September 26 Revolution.

Top speed of 148km/ph. Laughable. A Soviet missile from the the 1960’s could destroy this garbage easily. Onwards amerotards!

Let me tell you something. Who won the Cold War? And in Yemen, do you know that Iran supported North Yemen against pro-Soviet South Yemen? Just saying.

Congrats Jens.. I’ve given u a thumbs up

A broken clock is correct twice a day. I also upvote the cracker.

Communists won the Russian civil war and the Chinese civil war. But let me tell you something. Iran was with the West during Cold War and Iran supported North Yemen against pro-Soviet South Yemen. This is fact.

Americans also lost the Vietnamese civil war and the Afghan war. But this doesn’t change reality.

To be honest.If the air defence of houthis was effective,then they would be able to target and destroy warplanes of the Saudi coalition.This is not happening, so their air defence capabilities are good for target’s with low speed and at low flight altitude.

Small scale zionist drones are used to track and harass Croatian citizens. It started with the kitarovic “presidential” regime. An american pig stooge.

The tourists are usually unaware they are being scanned & monitored.

Doesn’t surprise me coming from Croatia. This is a zio-c*nt country if there ever was one. Ethnic cleansing mother-f*ckers just like their scum brethren in Occupied Palestine. They certainly don’t deserve cities like Split (Spalato) and Dubrovnik(Ragusa).

The Croatians are hardworking, cultered, honest people especially in the East. Their leadership is garbage, (hdz). They fked up when they joined the nato “partnership for peace” in 2004.

That is where their downfall began. Now people are “disappeared”, so much for “democratic eu nation”.

You are correct here. Personally, I like Serbians, Slovenes, Croats and Albanians. I don’t like Bosniaks and Vardaskans.