On Lesbos in Greece is the first hotspot for refugees. Zoran Dobric visited it undercover the first European journalist to do so – and is appalled: The hotspot is like a maximum-security prison for felons. Germany and the EU are showing here their ugly face: It is no longer about protecting the needy, but deterrence – and probably mass deportation as well. 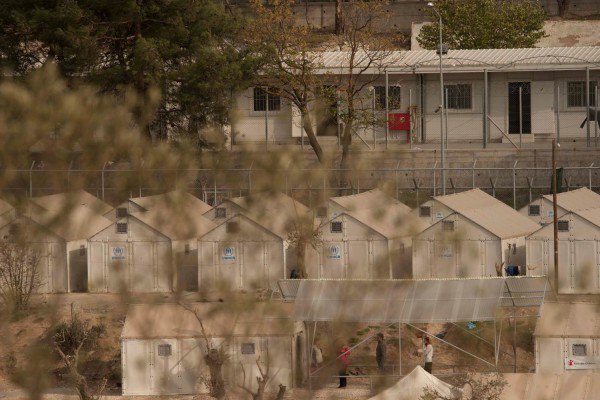 The EU hotspot on Lesbos, a prison for refugees. (Photo: Zoran Dobric)

Originally appeared at DWN, tranlsated by Karin exclusively for SouthFront

“I must say in all honesty, if we begin now to have to apologize for showing a friendly face in emergency situations, then this is not my country.”

On the 16th of October, the Hotspot was opened in Moria on Lesbos and proudly presented to the public as the solution to the refugee crisis in Europe. Overall, it should be eventually eleven hotspots, six in Greece and five in Italy. Currently there are only Lesbos and Lampedusa, and these two are at best in a semi-finished condition. But in Lesbos you can get already an idea of ​​what the EU wants to achieve with these Hotspots.

Covering an area of ​​about one hectare, a facility has been created that is more like a maximum-security prison for felons then a refuge center for people that were fleeing from a war zone and are in urgent need of international protection. The former military camp is surrounded by a double, four and a half to five meters high, chain-link fence with barbed wire on top of it. There are watchtowers, prison-like zones, residential barracks and armed guards. This facility is coordinated, controlled and monitored by the so-called European Agency for Operational Cooperation at the External Borders of the Member States of the European Union – better known as FRONTEX.

All refugees who come to Lesbos, have go to the hotspot in Moria, to get a registration notice. This means that every refugee must give the officials information about which country he came from, how he managed to get to Lesbos and why did he leave his native country. Everyone is photographed and fingerprints are taken. Once all this is done, most Syrians and Iraqis get a confirmation that they are registered. With a registration notice, they may continue traveling to Germany or Sweden.

The fundamental problem in the hotspots is that the registration procedure is deliberately accelerated. This means that within three to five minutes famished, sick and people under shock need to tell the Hotspot officials credible where they come from and why they want to go to Europe. Even so the first interview with the officials is whether the refugee may enter the EU or not. Not for every language is a translator at hand. That means only a few people are understood and in a position to clearly communicate with officials about their reasons for flight – most do not even know whether they were understood by the officials. Aydan Iyigüngör of the EU Fundamental Rights Agency criticizes: “It goes without saying that the process should be speed-up, but the acceleration must not mean that the level of control of refugee reasons should suffer.”

About the procedure in the hotspot refugees are hardly informed. They do not know exactly what to expect – including why the interviews, fingerprints, photos, etc. are taken and what will happen with it next. Aydan Iyigüngör: “There is no defined procedure from A to Z, which actually defines what the respective process steps are and how long they will take.”

The desired registration confirmation the refugees then get in the Greek language. So none of them really understand what is actually written in the important paper. But this is the only document that counts on the other EU borders.

Officially, the primary role of the Hotspot is to register refugees who want to go to Europe. In fact, the hotspot officials are much more concerned with tracking the human traffickers and their supporters. Wherefore employees of Europol and the Greek authorities are also active in the Hotspot.

The refugees do not benefit from this focus: The refugees were in fact abandoned by all and ultimately forced to seek by themselves ways to survive. Now the EU wants to indirectly declare their escape as being criminal, by declaring those who help them escape even for enormous payment, to be human smugglers and to chases them. But the real problem is that at all border crossings along the so-called “Balkan route” these “human smugglers” “cooperate” at with the border authorities.

A Serbian “carrier” says: “As in real life, there is also here a two-tier society. Many refugees are drowning in the Mediterranean and hang in the Hungarian or Macedonian barbed wire. But those who I have transferred are traveling by car. Before each border crossing they are brought into a small bus and drove directly to the border crossing. The border policeman and the entire shift know that this bus is coming and that refugees are sitting in it. You may guess why they look the other way. Each border policeman gets 50 euros per refugee. ”

If the EU really wanted to thwart the plans of the “human smugglers”, they would take action exactly about this scandal. But their primary goal is to complicate the way for the refugees into the EU. Therefore, they want to eliminate the “carriers” – although the refugees have come voluntarily.

Interestingly, human rights organizations such as Amnesty International have been kept away from the Hotspot facitlity.

The refugees are completely at the mercy of the Frontex officials in the Hotspot: They are allowed to be complaining about the decisions of the authority, but where the appeal will end up and whether it is ever perceived as such, is still unclear. Aydan Iyigüngör: “Currently it is not clear how complaints of refugees are being put forward in the Hotspot-Model and how they can be followed up.”

Frontex has the opportunity and also the designated premises, to hold refugees whose asylum decision is negative, on the Hotspot area. Thereof probably no one outside of the Hotspot will hear about, least of all the national asylum authorities. So Frontex could keep rejected refugees until their exhaustion at the Hotspot area, with the aim that these eventually leave “voluntarily” the EU area.

Here lies one of the most dangerous loopholes in the system, where human rights can be trampled on. Maybe just that is the European Commission’s intention: all human rights issues, to which we Europeans are so sensitized, to keep as far as possible away from the public and the media..

That would be a criminal, at the same time also a very efficient method, to let as many refugees that would have a right to seek asylum, not to come to the EU. That would also explain why the EU such an important issue concerning the democratic society, to grant international protection of refugees, write over to an agency or a company that is proven to be very tough and deals with little transparency with refugees.

On the edge of the Hotspot facility in Moria, directly at a road junction, two improvised-out of plywood information boards made are mounted. One points north, the other to the east. This tells us that a distinction is made between refugees from Syria and other countries. Indeed, refugees are housed in the Hotspot in two separate wings. The volunteers are horrified and speak of a first generally separation between economic and war refugees. More or less this is confirmed at the Greek-Macedonian border.

It was only on the 9th of December 2015 when more than two thousand refugees, mostly Iranians, Pakistanis, Somalis and Moroccans, got transported from the Macedonian-Greek border to Athens. There they were allowed to choose: They could either go back voluntarily to their own country or be transported by the Greek asylum authorities there. It’s hard to believe that the Frontex officials would in the Hotspot of Moria carefully checked each of the reason of their flight, and processed. That’s also not the order that they have received from the European Commission. Again the top priorities would have been: All those who do not come directly from war zones, must not enter the EU-ground.

One of the biggest problems, which the operation Hotspot is currently facing, is the lack of personnel. Two weeks ago only 36 officers were employed in Moria. Way to little to take pictures of 5,000 to 8,000 refugees that arrive in peak hours every day, to interview them, to take their fingerprints and to write out and hand out registration notices. Afterwards to archive the recorded data, forward them to the national asylum authorities in Europe and in the meantime, to supervise the refugees and guard the Hotspot facility. In October FRONTEX has called on the Member States for 777 additional border guards. At their disposal are currently only 444 officers in total. These while six hundred employees are required in Greece alone.

On the slopes of Moria, only a few meters away from the Hotspot barbed wire, for three to five days thousands of freezing, soaked and ill children, women and men have to wait in the open, in the cold. For them neither FRONTEX nor the Greek Government and the least the European Union care.

The refugees are left to the helpfulness and perseverance of volunteers. People from around the world who do not want to stand by and watch the shame of Europe, come to Moria and bring their own and donated money, organize, buy tents, clothing, food and medicine to help the most vulnerable of the vulnerable, the ones Europe let down. The EU is here indisputable acting on behalf of the Member States, including Germany – where Angela Merkel is still being celebrated for its supposedly generous openness.

For the EU it is obviously more important, to impede the way into safety even more for the refugees or perhaps to block it. Even if the EU mandated the Frontex officials in the Hotspots with accelerated asylum procedures and deportations of refugees, which does not mean that the hot wooed EU project is based on an international basis. It is not clear at all, according to which asylum laws refugees are to be treated in Moria. Equally questionable is how service tied FRONTEX officials are to replace a two-instance asylum procedure planned by the Geneva Convention.

Obviously, it is more important for the EU to quickly get rid of the refugees then to ensure their protection and to comply with the refugee conventions and laws.

Zoran Dobric is an editor at the Austrian Broadcasting Corporation (ORF). In 2009 he received the prestigious Robert Hochner Prize of the Austrian Union of Journalists for his investigative work. 2011 Dobric received for his long journalistic advocacy of the rights of social minorities the Claus Gatterer Prize.

It is illegal under the UN laws on genocide to racially replace the ethnic indigenous people of Europe or any place else on earth as of the 1960’s.