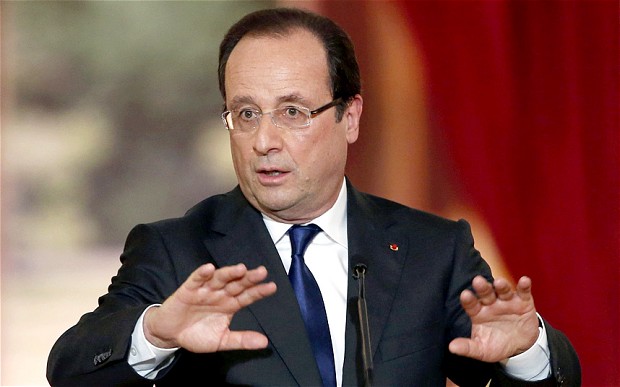 French president Francois Hollande said in a France Inter radio interview that Brussels ought to take a hard line against EU members who are governed by right-wing parties. Such as Poland.

–EU membership can be suspended because Europe has treaty-guaranteed legal measures which may be applied to prevent violations of democratic principles, Hollande said.

He also added that “when media freedoms are threatened, or constitutions or laws are violated, Europe cannot act simply as a safety net, but ought to implement procedures to eliminate such countries due to their violations.”

Hollande is in favor of far-reaching monitoring and “preventive control” over proposed changes to Polish laws. The European Commission began the “rule of law protective procedure” on December 13 against Poland due to the Constitutional Tribunal confusion.

In 2000, 14 EU member states introduced political sanctions against Austria for 8 months after Austria’s ruling coalition invited Joerg Haider’s Freedom Party. EU countries froze official contacts with Austrian government representatives. However, as Die Welt wrote just before the sanctions were lifted, European Commission maintained normal relations with Austria’s representatives. Which is why it undertook to mediate in the matter of restrictions.

Haider offended some EU countries by praising Nazi labor policies and claiming that concentration camps were ordinary prison camps. He died in a car crash in 2008.

Hollande’s current comments appear as his popularity is dramatically decreasing. According to recent polls, 74% of the French do not want him or his predecessor Sarkozy to run for election in 2017.

” When media freedoms to lie,deceive and distort the truth are threatened, monitor and if need be eliminate the country. Family vacation plans to Paris will be changed to Cracow Poland, oldest functioning University in Europe, no state of emergency yet, underrated cuisine and favorable exchange rate.

Hollande should use shoe polish on his face like Al Jolson

Who wants to join the murder gangster of USA or NATO.

Why not – Poland will than drop the EU sanctions against Russia and that would be of great advantage for them.

I wonder if the Poles will ever wake up to the fact that they will be a lot better off teamed up with Russia.

Better off with Russia? That’s actually amazingly hilarious and could only connote a lack of understanding considering history. Everybody uses everyone else to push their own needs. There are no “good” guys and Poland is stuck between a rock and a hard place. Although I can see what you meant in a certain degree – it is better to be a puppet state of Russia rather than Merkles migrant rape fest. Better to be broke than to be destroyed by this butcher of Europe.

I have a reasonable grasp of Polish history, and I agree that Poland is, as we say, caught between a rock, and a hard place. However, Russia needs friends, and I do think that Russia would welcome Poland as a valued partner. The Poles have been fighting for their freedom for hundreds of years, and it’s about time they were give the respect that they’ve earned. Poland will get no respect from the EU. All Poland can expect from the EU is meddling, debt, and migrants.

As a Pole, I second that (to a certain degree) – maybe not ‘teamed up with Russia’ but at least we should follow Orban and adopt a more realistic relationship with Russia.

The EU is Zionist-poison, invented to ethnically cleanse the indigenous population for replacement space for others. http://www.dailystormer.com/

Given that the EU is becoming the tyranny that it was always meant to be (see EU father and Rothschild front man Jean Monnet’s letters admitting it), getting out is a great idea. It is DESIGNED to enslave Europe and impoverish it a la Agenda 21. Why do you think they brought in all this migrants? To enforce the ever worse tyranny. Why all the austerity? Because the countries signed onto the BANK’S debts.

Who invented such falsehood? Jewish are a democracy encircled by theocracies!