The late Saturday release of the FBI’s heavily redacted FISA warrant application for Carter Page reveals that the Obama administration, eager to make a case to spy on a US citizen (and arguably the Trump campaign) cobbled together a combination of facts and innuendo from Page’s business dealings in Russia, several press reports of varying reliability, and of course, the infamous Clinton-funded “Steele Dossier,” which the FBI went to great lengths to justify despite being largely unable to verify its claims.

Perhaps the most concerning takeaway, however, is the stark disconnect between the FBI’s multiple allegations against Page versus the fact that he hasn’t been charged with a single crime after nearly two years of DOJ/FBI investigations.

Once issued, the FISA warrant and its subsequent renewals allowed the Obama administration to spy on the Trump campaign using a wide investigatory net, so the October, 2016 application painted Page in the most criminal light possible, as intended, in order to convince the FISA judge to grant the warrant. It flat out accuses Page of being a Russian spy who was recruited by the Kremlin, which sought to “undermine and influence the outcome of the 2016 U.S. presidential election in violation of U.S. criminal law,” the application reads.

In order to reinforce their argument, the FBI used circular arguments which presented dossier claims as facts, such as “The FBI learned that Page met with at least two Russian officials” – when in fact that was simply another unverified claim from the dossier.

ALERT: The declassified FBI warrant application attests to secret FISA court that "THE FBI LEARNED that Page met with at least two Russian officials during the trip,"as if FBI learned this independently,when in fact it's clear it relied on Clinton-paid dossier for the information

FBI represented to a federal judge that investigators knew for certain that Carter Page met w/ Igor Sechin and Diveykin. Except, the FISA app acknowledges this intel came from Steele dossier. And FBI has acknowledged dossier was not verifieid. https://t.co/7ZstgwlVOh pic.twitter.com/NDYvBIhXB0

Another approach used to beef up the FISA application’s curb appeal was circular evidence, via the inclusion of a letter from Democratic Senate Minority Leader Harry Reid (NV) to former FBI Director James Comey, citing information Reid got from John Brennan, which was in turn from the Clinton-funded dossier.

BREAKING: FBI's FISA warrant actually cites as "evidence" to spy on Carter Page/Trump campaign "Senate Minority Leader" Harry Reid's 2016 letter to Comey citing information he got from John Brennan who got it from the Clinton dossier — talk about circular evidence!

In fact, aside from the Clinton-funded Steele dossier (“Source #1”), the FISA application cited no other evidentiary sources.

BREAKING: In all the FISA apps filed to spy on Trump advisor Page there is no evidentiary source listed other than "Source #1" — and "Source #1" is Christopher Steele. (There is no Source #2 or Source #3, etc. Just a single source — Source #1.)

The application also reveals that FBI agent Peter Strzok lied when he said he had nothing to do with the FISA application, when in fact the disgraced FBI agent used Carter Page’s September 2016 letter to Comey defending himself against a Yahoo! News article written by Michael Isikoff (who used information obtained directly from Steele) as a pretext to open the investigation on Page.

The FISA app also mentions a letter Page wrote to Coney denying the allegations made by Isikoff (through Steele).

Strzok used this as a pretext to interview Page. pic.twitter.com/hBdlPnZ5fG

20) Also on September 25, Page sent a letter to the FBI denying the allegations in the Isikoff article. 21) On September 26, the Post's Rogin posted an interview with Page in which Page called the allegations 'garbage' and said he did not meet with Sechin or Divyekin. 11/14

Meanwhile, the FBI tried to downplay Steele feeding Isikoff information for his article, falsely claiming in the FISA application that Steele did not “directly provide” information to the reporter, when in fact he did.

“Obviously the information that I got from Christopher Steele was information the FBI already had,” Isikoff said in a February podcast.

It turns out that this was 100% false. Steele was the source.

They lied to the FISA court. pic.twitter.com/b0IoOnCNzL

The FBI also went to extreme lengths to convince the FISA judge that Steele (“Source #1”), was reliable when they could not verify the unsubstantiated claims in his dossier – while also having to explain why they still trusted his information after having terminated Steele’s contract over inappropriate disclosures he made to the media.

“Not withstanding Source1’s reason for conducting the research into Candidate1’s ties to Russia, based on Source1’s previous reporting history with the FBI, whereby Source1 provided reliable information to the FBI, the FBI believes Source 1s reporting herein to be credible“

On top of that, Bill Priestap told Congress that corroboration of the dossier was in its "infancy" when FISAs were being granted. An FBI unit found dossier was only "minimally" corroborated.

If the redacted portions of the Page FISAs are where the FBI provides proof of dossier's allegations (as ppl in my mentions are hoping is the case) then why is this passage included in all 4 of the FISA apps? It's not "we have proved Steele's claims"; it's "we trust Steele." pic.twitter.com/MJTHfSDRzg

The warrant application also confirms a February report that the FBI received a copy of the dossier from the Obama State Department, after Steele provided it to senior DoS official Jonathan Winer. Winer was also approached by Clinton confidant Sydney Blumenthal with a separate anti-Trump dossier written by longtime Clinton pal Cody Shearer. So two separate Clinton-originated dossiers went from Steele and Blumenthal to the State Department, which then gave it to the FBI. Of course, the agency also had a copy it received in early August, 2016 directly from Steele himself, and we also now know that there were multiple versions of the document which went through various conduits before reaching the FBI.

Curiously, the FBI spotlighted the dossier provided by the State Department, ostensibly to enhance its credibility.

The FBI’s use of flimsy and uncorroborated evidence to support spying on Page, combined with the fact that a 3-month extension was granted despite the fact that it was obvious by June, 2017 he wasn’t a Russian agent, will most certainly embolden those, like President Trump, who have called the entire Russia investigation a “witch hunt.”

So now we know. The Russian collusion fairytale was a hoax from the beginning. What a disgrace. https://t.co/soHweYJYwe

The 6/2017 FISA app was signed by McCabe and Rosenstein – immediately after Mueller was appointed.

Carter Page was no longer really "under investigation."

Page and the warrant were a pretext to surveille the rest of Team Trump. pic.twitter.com/1BVwlUQumF

I honestly wonder how many prior FISA warrants have been based upon oppo research done by smear shops such as Fusion GPS working in conjunction with FBI to target American citizens because of their political affiliation?

Reassuring to know the FBI relies on flimsy, incomplete news stories to win warrants to wiretap US citizens. https://t.co/2p8KpcAO0p and https://t.co/b8MK6ZF8My pic.twitter.com/meJiYUt5AW

Finally, on Sunday morning, president Trump responded with a series of tweets, including both his own thoughts, and quotes of others, stating that it is “looking more & more like the Trump Campaign for President was illegally being spied upon (surveillance) for the political gain of Crooked Hillary Clinton and the DNC. Ask her how that worked out – she did better with Crazy Bernie. Republicans must get tough now. An illegal Scam!”

Looking more & more like the Trump Campaign for President was illegally being spied upon (surveillance) for the political gain of Crooked Hillary Clinton and the DNC. Ask her how that worked out – she did better with Crazy Bernie. Republicans must get tough now. An illegal Scam!

.@PeteHegseth on @FoxNews “Source #1 was the (Fake) Dossier. Yes, the Dirty Dossier, paid for by Democrats as a hit piece against Trump, and looking for information that could discredit Candidate #1 Trump. Carter Page was just the foot to surveil the Trump campaign…” ILLEGAL!

FBI: “The goyim know. Shut it down!”
Deep State: “After all that hard work? Hell no! Stick to the plan: Increase opiate production. Arrest more Russians. Burn the Reichstag. Open some more random investigations. Raise the price of oil. And start the war already – where’s that God damn Iranian false flag?”

….and get Hillary to announce that she is running for 2020! 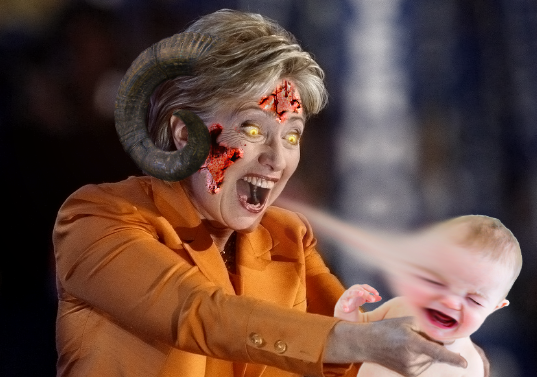 No, that is just yuk and so wrong.

She usually doesn’t kill them. She only sucks their souls out to maintain her human form. The babies are otherwise healthy and will grow up to live normal psychopathic lives as soulless U.S. politicians or CNN anchors.

SF you left out the best part! Page was supposedly an energy consultant; that is the identity he used
when he as an FBI ASSET gave docs to a Russian who was then arrested as a
spy. So Carter Page was an FBI asset and witness in the subsequent trial that was responsible for the
bust of a high level Russian agent in 2013, and remained involved throughout
the court case UP TO May of 2016. And 6 months later he appears at Trump’s door
offering his free services as an energy consultant, so same sting,
different mark. He was still working for the FBI which is why they never
arrested him.

How does this crap get in print? First Page was under investigation BY the FBI before he worked for the Trump gang of morons. The investigation of page never started to do with Trump but I guess when your buddy and string puller master of the puppet you get nervous when the truth comes out. So the more Trump whines the more we know how much he is invilved with the Russians.

General Helter Skelter information from the US.

The 4Chan’s took down the director of Guardian’s of the Galaxy, James Gun for mountains of Pedo tweets. They screen shotted them all.

The claim is that Hollywood has been needing to buy diapers.

The 8Chan’s will be getting into the action. There is a Hollywood insider who wants to see Hollywood burn, and he knows where the bodies are buried, and he is chatting up a storm.

It seems to be a new form of Hollywood roast. Hollywood is scared.