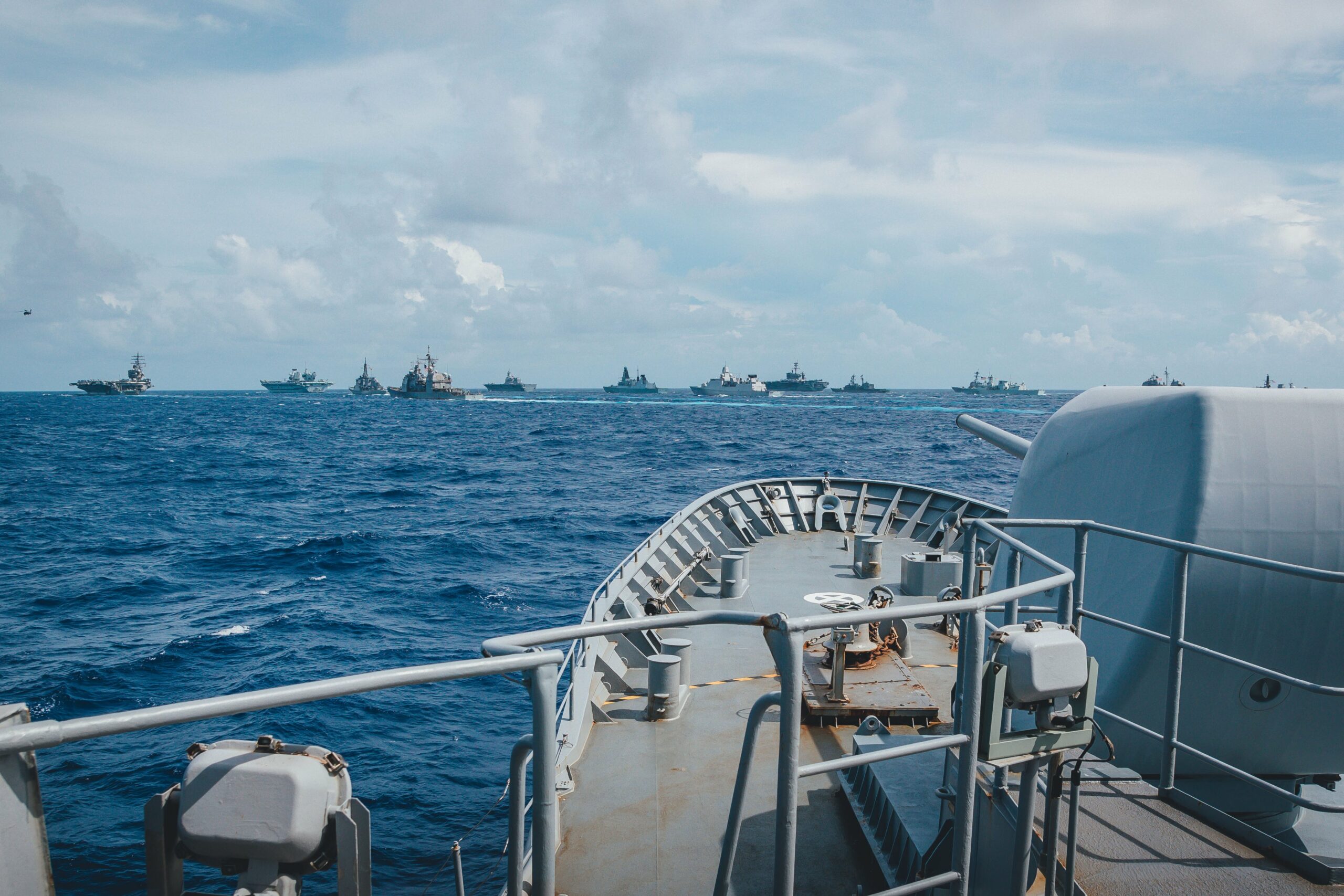 A British aircraft carrier has led warships from Britain, America, Canada, The Netherlands, Japan and New Zealand into the disputed South China Sea.

The entry by the HMS Queen Elizabeth aircraft carrier and the other more than a dozen warships is a “freedom of navigation” maneuver.

China previously issued a warning to the UK’s Carrier Strike Group not to carry out any “improper acts” as it entered the South China Sea for the first time earlier this year. The pro-government Global Times, which is seen as a mouthpiece for the ruling Chinese Communist Party, said:

“The People’s Liberation Army Navy is at a high state of combat readiness China has been closely monitoring the progress of the Carrier Strike Group, which is currently sailing through the South China Sea en route to Japan. It has also accused Britain of “still living in its colonial days.”

Both the US and UK have angered China previously by carrying out ‘Freedom of Navigation Patrols’ in the South China Sea to assert rights to freedom of navigation.

HMS Queen Elizabeth is the deployed flag ship for Carrier Strike Group 21 (CSG21), a deployment that will see the ship and her escorts sail to the Asia-Pacific and back.

The Carrier Strike Group includes ships from the United States Navy, the Dutch Navy, and Marines from the US Marine Corps as well as air assets from 617 Sqn, 820 NAS, 815 NAS and 845 NAS.

The Royal Navy say that the UK’s Carrier Strike Group will visit more than one fifth of the world’s nations. Led by HMS Queen Elizabeth, the task group will visit 40 nations including India, Japan, Republic of Korea and Singapore in a deployment covering 26,000 nautical miles.

“While in the Pacific, ships from the Carrier Strike Group will mark the 50th anniversary of the Five Powers Defence Agreement between Malaysia, Singapore, Australia, New Zealand and the UK by taking part in Exercise Bersama Lima. Joining HMS Queen Elizabeth on her maiden deployment are destroyers HMS Diamond and Defender; frigates HMS Richmond and Kent; an Astute-class submarine in support below the waves; and Royal Fleet Auxiliary support ships RFA Fort Victoria and RFA Tidespring.

More than 30 aircraft will also embark across the task group including F-35 jets from 617 Squadron, the Dambusters, and the US Marine Corps’ VMFA-211; Wildcat helicopters from 815 Naval Air Squadron and Merlin helicopters from 820 and 845 Naval Air Squadrons. Royal Marines from 42 Commando will also deploy with the carrier. Dutch frigate HNLMS Evertsen and American Arleigh Burke destroyer USS The Sullivans are also part of the strike group.”

Fog of War
Reply to  redpilledthoughtcrimes

Usually people who provoke want a response and arent scared of it.

Corrupt shithole of Ukropisstan
Reply to  Fog of War

It did really go well for the U.S. in recent years, didn’t it. Oh wait…

Lock them whit the radars for anti ship missils, they are gon a run home. Send an old rusty ship to collision.

Putin the poodle
Reply to  A.H.

you really are dumb

The list is missing a few guided missile cruisers and SSN subs. The USS Ronald Reagan and USS Carl Vinson are Nimitz class carriers, they are always part of a strike group of 4 to 6 Arleigh Burke class guided missile cruisers and 2-3 Los Angeles or Virginia class SSNs. Plus 1-2 suplly ships. So one carrier has an escort of around 7-11 ships and subs. Two carriers double that. Plus the other ships in the fleet. The actual fleet is a lot bigger than what they have listed. Its a threat non the less no match for supersonic cruise missiles snd hypersonic gliders. The only real threat in that fleet are the SSN subs because they are invisible.

China most likely has radars for the SSN subs. I hope they do

That goes vice versa. Difference is Chinese air defense is the second best on the planet after the Russian, while this fleet is defenseless against super and hypersonic cruise missiles…

Yep, I agree. The USN places high value on the aircraft carrier. Everything around it is there to support it. We have no idea how effective or ineffective the AGEIS system is on the ships, either. I don’t think that system has ever been tested in actual combat. The SSN subs would be a serious challenge to any theoretical Chinese action. All I know is, I am glad I am not a military planner. What a nightmare trying come up with plans for all different possible scenarios!

Freedom of navigation my arse,if it was about that they would have sent an oil tanker,not sixteen warships.

a UK grave yard coming in the South China.

Queen Elisabeth? Queen Victoria more likely… Anglos and their pathetic sIaves still think it’s 19th century and they can bully China with ‘gunboat diplomacy’. But even back then Napoleon said: “China is like a sleeping dragon Let her sleep for when she wakes, she will tremble the world.” The dragon is awaken, western f4ggots cannot stop it with their LGBTboats and cheap provocations.

the ccp will be crushed, free the chinese people

Like Ukropisstan was? Please… Time to small the coffee..

Then their is obviously undersea technology. Antiquated western garbage stands no chance.

We have no idea what would happen in an actual naval engagement. I hope we never have to find out. We certainly don’t know how truly effective the Chinese military is, just as we don’t know how effective the U.S. would be at fending of any potential threat. The whole thing is just a dog and pony show.

I am sure all are just protecting their borders on the South ‘China’ Sea.

Funny how idiots forget how many thousand of miles these western imbeciles arrive from.

All of this is viewed as a provocation by China. But, China is not exactly innocent, either. Terrorizing the people of Taiwan is helping no one. If Taiwan was recognized as an independent country, that might help reduce some of the warmongering. If god forbid, a shooting war started in the South China sea, I’m not convinced the Chinese would prevail, but it would be a costly battle for the stupid western side as well. Nobody wins in war. Every “side” is a loser.