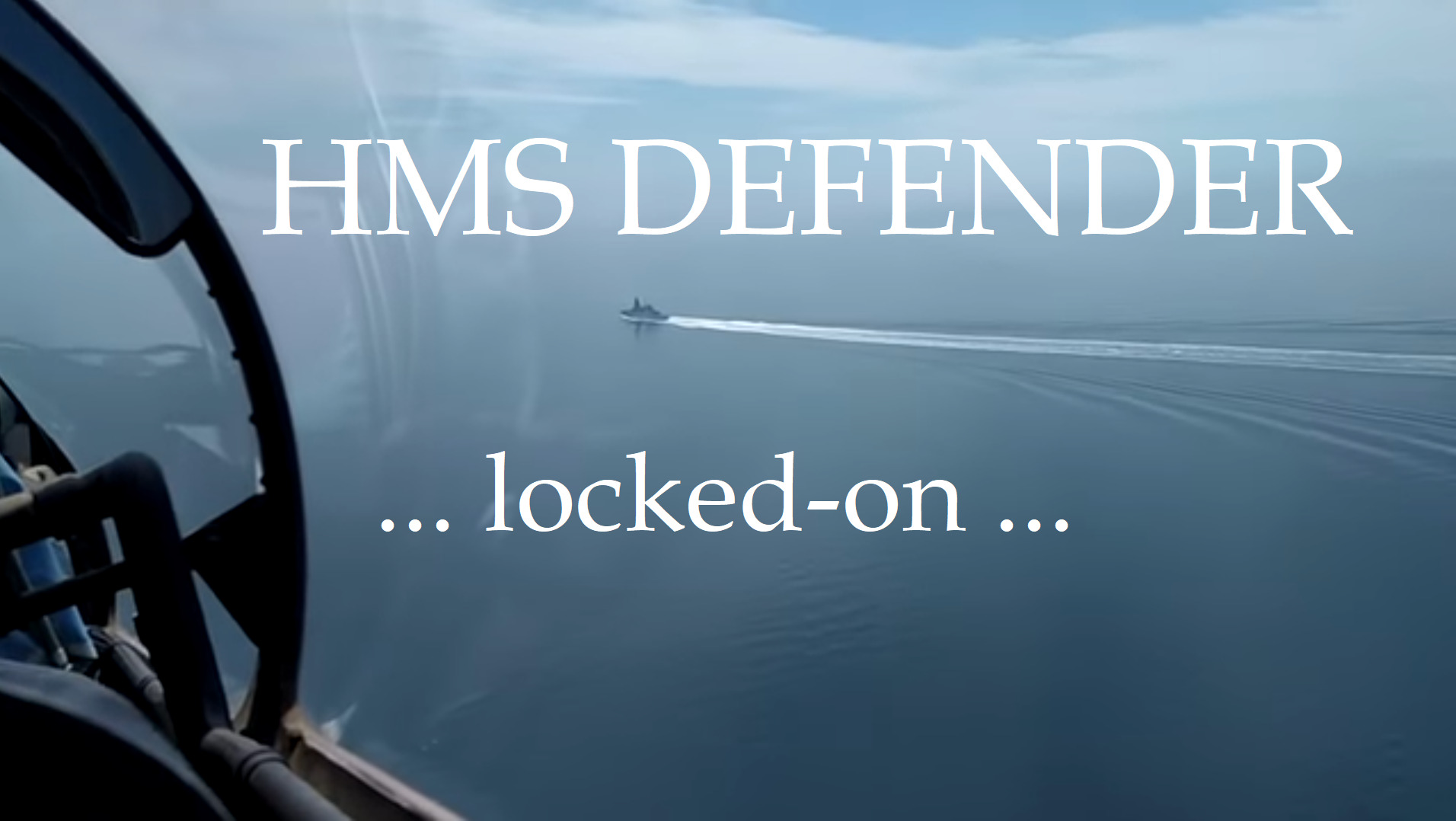 On June 23, the HMS DEFENDER missile destroyer of the British Royal Navy entered Russian waters in the Black Sea, violating international maritime laws. The Russian border patrol ship was forced to open a warning fire. After that, the Russian Su-24m aircraft carried out a warning bombing ahead the Defender’s course.

You may read a more detailed chronology of events here: LINK. 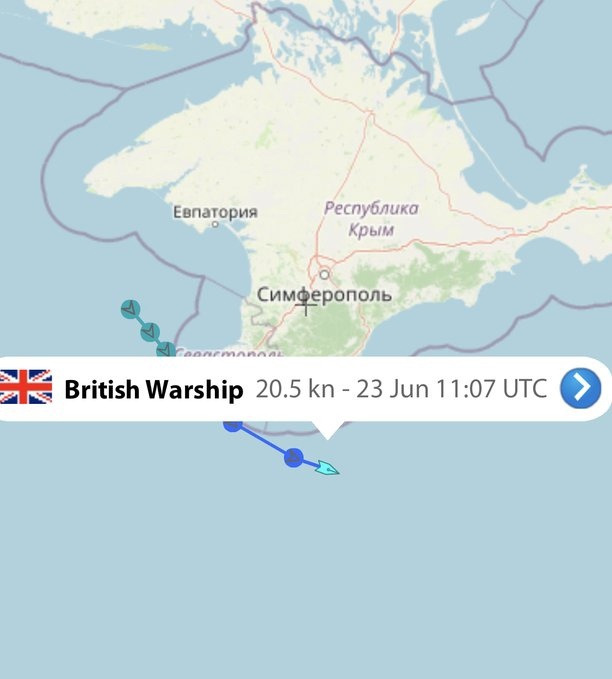 Following the incident, the recording of the negotiations of the boar guard and the British destroyer was published online.

The British warship was warned that its dangerous actions  threatened the safety of navigation in the area, but the destroyer disregarded the received orders and did not respond to them with any action.

From the very beginning of the negotiations, the style of communication of the Russians was close to the conscious humiliation of the British.

P.S.: Don’t be surprise to read soon in MSM that these Russians speaking were famous GRU agents Petrov and Bashirov.

Later the same day, the Russian Defense Ministry released the video showing the interception before the warning bombing. In total, four OFAB-250 aerial bombs were reportedly dropped from Russian Su-24m ahead of the Defender’s course.

What a coincidence, the BBC journalist was on Defender’s board.

“Our correspondent, who had been invited on board the ship before the incident happened, saw more than 20 aircraft overhead and two Russian coastguard boats which at times were just 100m (328ft) away”. -thee report reads. 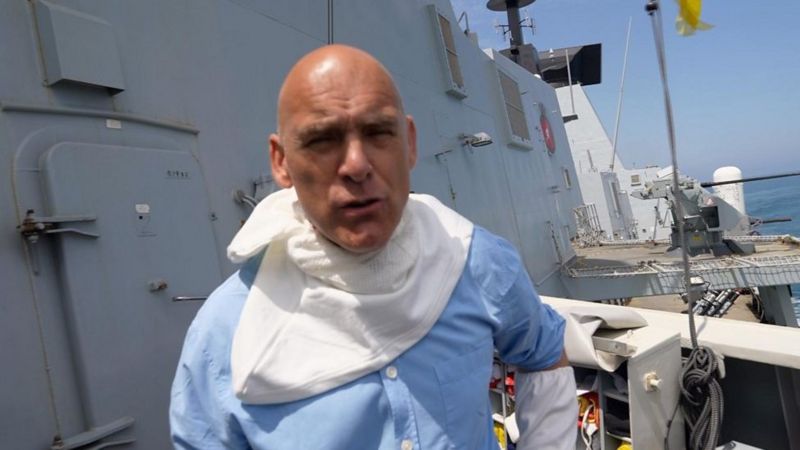 Beale’s report confirmed that crossing Russian waters was an intentional provocation and not an accident:

“I am on board the warship in the Black Sea.

The crew were already at action stations as they approached the southern tip of Russian-occupied Crimea. Weapons systems on board the Royal Navy destroyer had already been loaded.

This would be a deliberate move to make a point to Russia. HMS Defender was going to sail within the 12 mile (19km) limit of Crimea’s territorial waters. The captain insisted he was only seeking safe passage through an internationally recognised shipping lane.”

Following the blatant provocation, the British ambassador was summoned to the Russian foreign ministry in Moscow.

Вespite all the evidence, the British prime minister’s office and defence ministry denied any confrontation and made unexpected claims, blaming on ”another Russian military exercises”.

We believe the Russians were undertaking a gunnery exercise in the Black Sea and provided the maritime community with prior-warning of their activity.

No shots were directed at HMS Defender and we do not recognise the claim that bombs were dropped in her path.

UK Defence Secretary Ben Wallace added: “As is routine, Russian vessels shadowed [the ship’s] passage and she was made aware of training exercises in her wider vicinity.”

Comments from official London are obvious and easily explained: the British did not expect such a fierce reaction from the Russian side and they have nothing left but to deny their shameful retreat.

So why am I not surprised that the U.K. is lying. They got caught with their hand in the cookie jar, and they know it. It took an SU-24 dropping bombs ahead of the ship to finally get the message across. At this point, I think the British were just looking to see how much they could get away with before the Russians responded. Well, they got a response. What if the provocation went further? My god, the West just seems desperate to start WW3.

They will get the message when a Sunburn missile blasts through the side of a ship,then they will be crying.

Then and only then.

It won’t be a Sunburn Missile, that is what they hope it would be, this would be sank with a torpedo, it wouldn’t even know was there.

AM Hants
Reply to  Lance Ripplinger

Not forgetting they had a film crew and journalists on board. I wonder why? The UK media, were saying the Russians were being out of order and grandstanding, and not mentioning the fact the UK ship was close to a Russian military base. 77th Squadron and Integrity Initiative have been called in to man the comments section. So obviously it was all scripted, but, they were not expecting Russia to be so quick to respond. UK media, are stating it was Russian media disinformation, that a British military ship was so close to a Russian military base.

Peter Wallace
Reply to  AM Hants

We just had the British version from the film crew on our news so for those that don’t bother to look elsewhere that is the story they will accept as fact. As you say it looked planned and scripted for the camera.

Who cares? There will not be a WW3. This is a cynical bread and circus for the masses.

Yes. It seems like a simple thing to steer a few kilometers to the West and avoid any provocation and escalation. They choose on purpose not to do so. And for what? The passage of a British warship through the Crimean territorial waters doesn’t change the de facto status of Crimea being part of Russia. It doesn’t move the needle legally one way or another either. It’s a stunt designed to lift the morale of a collapsing Ukrainian state, encouraging the more warlike elements of that government. Does HM’s government really want a miscalculation on the part of Ukraine to lead to a war that NATO can’t save Ukraine from the consequences of? If so, than it’s plain to see that they really don’t care about Ukraine or it’s people.

Not only was a BBC Journalist on board, but, also a Daily Mail Journalist and film crews. Why? When we cannot even defend ourselves against the dinghy tourists, turning up on our shores? Did this go through Parliament, to start a war with Russia?

Watching the ITV news, for the first time in years, they were blaming everything on Russia, for placing her nation far too close to those NATO Bases. and being aggressive, when a British military ship gets up too close to her military base. Why were we so close to the Russian military base on Crimea, with journalists and film crews on board, the HMS Defender?

Russia didn’t violate Danish territory. And U.S. and UK and France are pushing neocolonialism not Russia. Russia cant occupy itself. Crimea is Russia and was for the past 250 years.

“…The crew were already at action stations as they approached the southern tip of Russian-occupied Crimea. Weapons systems on board the Royal Navy destroyer had already been loaded….”776, g

Why does the UK believe that they can hold referendums, based on self determination, but, over 80% of the electorate of Crimea, and over 93% of them, voting to return home to Russia, amounts to Russian occupation?

Watch out for the Integrity Initiative and 77th Squadron trolls, trying to take control of the comments section.

Ricky Miller
Reply to  yo666

They were at action stations by their own journalists descriptions. That’s not innocent passage. And it is the interpretation of the LOS among the majority of the world’s LOS treaty states that military vessels must communicate intentions for innocent passage ahead of time, something the neocolonial West doesn’t believe or adhere to. It’s a matter of interpretation and purposeful provocation which is at issue here. Russia needs to ram one of these NATO ships in order to stop one intrusion last year and now one this year from becoming a monthly state of affairs, with endless saber rattlers sailing just offshore. And the Project 22350 frigate “Admiral Kasatonov” needs to be moved to permanent station in the Black Sea, with the 4th hull being redirected to the NF once commissioned. The BSF needs heavy reinforcement now, especially since the Karakurt class Corvettes never seem to arrive. They just sit in the Baltic, doing nothing. Perhaps the crews are busy playing cards.

Hate to break it to you but it’s not 1853 anymore, your no good in the water anymore. Time to retire with the fishes.

They can only do such a thing because they have their man in power. Putin will never do anything to harm his partners.

Brutannia waives the rules until shit gets real, then they run away with their skirts tucked between their legs

If Russia sailed near the coast of the Jews’ UK Tyranny, the Jews’ UK tools and propaganda-media would have a field day bleating about it to the sheeple addled by the Jews’ propaganda and agitprop.

The people of Crimea voted to leave Ukraine and rejoin Russia, Jens. Why? Because the government that they helped to elect was overthrown in a coup. A Western sponsored coup. You, and the Western government and media, have no moral high ground to stand on. And no legal ground either, seeing that the West forcibly removed Kosovo from Serbia and guided the Albanian majority in Kosovo to an independence referendum, by their own admission. What’s good enough for some must be good enough for all and the lesson is that post war United Nations Charter documents don’t mean much when faced with old-fashioned hard military power. NATO opened the door to this state of affairs and Russia walked through too, to her own purposes and ends. The West, including you, should stop whining about it and stop pretending that the events in Crimea in 2014 happened in a vacuum. They didn’t.

As an American watching the Jews and their US Tyranny plunder and destroy my country, I hope, pray, that the Russians send a fleet to sail around in the Gulf of Mexico; maybe even get up close to Galveston or something. It would be a joy the irony of the Jews and their tools bleating about how “they can’t do that.” Sad, though, will be that the vast majority of my countrymen will just repeat the bleating as the sheeple they’ve become.

Echoes of 1854. Only this time it’s the Charge of the Shite Brigade.

:-)) That one deserves double upvotes.. The Russians had the biggest guns .. again..

It would have made an infinitely more emphatic statement.

They hoped for exactly that and were ready to analyze the nature of Russian EW. At the time of British ship’s innocent passage (teehee!) a US spy plane was sniffing overhead.

Well, they apparently forgot any nation advanced enough to have such capable electronic warfare is also able to detect an intel gathering plane.

Journalistic bias lowers credibility, what can one warship accomplish alone against an large coastline? There never will be a real conflict fought between Russia and NATO, only the constant bickering and bias prevalent on both sides. All whilst the (((chosen))) laugh up this farce of their own making, as they reward their Shabbos Goy for going along with it all for helping to dupe the dumb “goyim”.

Any half-wit, twit of a Brit still stupid enough to serve in Her Majesty Queen Lizardbirth’s Royal Toilet-bowl Navy, is a racist, Jew-cucked slimey limey and deserves to go down to the bottom of the sea.

why did russia not seize it?

They aren’t pirates like the UK and Americant navy.

Just checked on marinetraffic.com for the HMS Defenders position and track, and surprise, surprise: The ship is now located close to Bahrain. How did it make the journey from Sewastopol waters to Bahrain in just 2 days? Lying is strongly supported also by falsificating ships identification on radars.

Next time just lit it up from the Bastion coastal defense system. 200 radar locks from supersonic cruise missiles should be enough to make them develop PTSD towards the end of the day ☺️

so this publicity stunt didn’t go so well. England isn’t England anymore and I wonder who they are trying to impress by presenting such a good target….