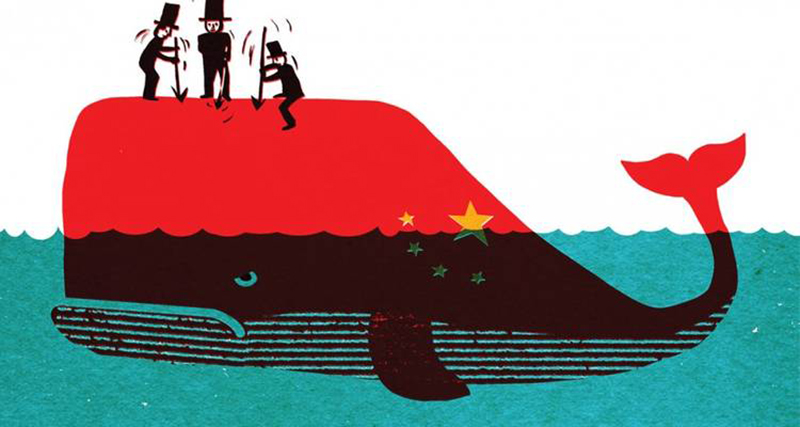 Written by Peter Akopov, originally appeared at Vzglyad (in Russian); Appeared in Bulgarian at A-specto, translated by Valentina Tzoneva exclusively for SouthFront

A great part of the American establishment does not accept Trump because he is against turning the United States into an instrument of globalisation, conducted in the sole interest of the transnational Atlantic elite. That is why some call Trump a dangerous man and a “useful idiot” of Putin. But because of this, many others support Trump, as they consider that America could still agree on a transition to a multipolar world without a major war. Trump is supported by traditionalists, anti-globalists and anti-Atlanticists around the world, including Russia. Even if he fails to change anything, let him have at least a chance to try.

Trump scares not only some Americans. He speaks sharply enough about China, vowing that he will change the trade relations with that country. As a matter of fact, Trump threatened China with a trade war because how else can the huge trade duties on imports from China be determined; something he seriously promised to introduce?!

For this reason, no one in China likes Trump. In fact, in China they do not like Clinton either, but they consider her the lesser evil. Although during the presidential struggle, Hillary Clinton is desperately trying to seize the slogans of Trump for protection of US producers and national commercial interests: “China is illegally flooding our market with cheap goods, steals our trade secrets, manipulates the market for its currency, provides unfair preferences of its state companies and discriminates against US companies.” With these words, Hillary was expressing herself in the spring, adding that she would compel Beijing to “step on toes.” “I know how they operate, and they very well know that if I became president, they will have to step on their toes, as we intend now and forever to secure a fair attitude towards America, or they will have to do without access to our market,“  Clinton said.

But all this can be attributed to the pre-election rhetoric and the fight against Trump. Here is the correspondence of Clinton’s advisers published a few days ago by WikiLeaks. It shows Beijing very well which of the two candidates is actually set really aggressively towards China. In one of the documents, as early as 2013, Clinton, discussing North Korea’s nuclear programme, said: “We intend to surround China with a hoop of AMS [anti-missile systems]. We intend to deploy more of our ships in the area. So, Chinese, you have to decide: either you get them North Koreans under control or we will have to think of a defense strategy against North Korea.” Clinton spoke recently in public on this issue. Just a month ago, she threatened China with the deployment of the US missile defense system in the region of the Far East, if Beijing does not pressure Pyongyang on the issue of termination of nuclear tests. She said that China will not like it if the US strengthens its presence in the region. Therefore, China must compel North Korea to abandon its nuclear programme. “The growing threat from North Korea requires not only a change of strategy, but urgent efforts to convince its neighbours, especially China, that this is not only a problem of the United States.” Clinton then stated that at present, the United States has many more opportunities to influence China and North Korea than before, and vowed to use all of them – from negotiations to sanctions.

It seems as if she is talking about the same thing, however, in a document leaked by WikiLeaks, Clinton talked about the US plan to circumvent China in a hoop of AMS and strengthen the presence of US naval forces off the coast of the Celestial. In other words, it means a move towards an open military and geopolitical containment of China. And the existence of a nuclear bomb and ballistic missiles in North Korea is only a pretext for increasing the US military strength. Beijing understands that perfectly. Just as in Moscow they have always understood that the deployment of an American missile defense shield in Europe is not directed against Iranian missiles but against Russia. China, just as Russia, has expressed opposition this year against plans of Washington and Seoul to deploy a new missile defense system in South Korea. Suddenly it becomes clear that in fact, Hillary Clinton considers it necessary to surround the whole of China with American AMS. As they say, thank you for your honesty!

No one will be deceived about what will happen if Beijing fails to persuade Pyongyang to abandon its nuclear and missile programmes. China has no capacity to dictate anything to North Korea, and in general, no one in the world can compel Pyongyang to abandon its weapons of deterrence. For North Koreans, the existence of nuclear weapons and ballistic missiles is the only guarantee that the US and South Korea will not attack. And neither Moscow nor Beijing could convince them otherwise; let’s say that the US is unwilling to liquidate the dynasty of the North Korean leadership. North Korea fought with the US for 60 years and Washington never gave a reason to doubt the US’s absolute hostility towards North Korea.

The version that Washington actually believes that the Chinese “can take control” over the North Koreans, of course, has the right to exist. But in this case, it must be acknowledged that the US strategists generally do not understand anything about Sino-Korean relations. And although we have a perfect example of complete ignorance shown by the American leadership in terms of assessments of the consequences of the occupation of Iraq (and in Afghanistan), everything in this Korean case should proceed from the fact that we are dealing with a well-planned part of the US strategy for China.

So, the North Korean card is used by the Americans against Beijing in the same degree of sincerity as the Iranian in Europe against Russia. Therefore, the position of Clinton is not surprising at all. Beijing simply got quite a clear confirmation about something they knew in anyway: the USA is active in strategic deterrence and encirclement of China and the coming-to-power Clinton “will expand and deepen” this policy. The USA has already had a hold on China for 70 years in the east and south-east. The chain of US bases begins in South Korea and Japan, and then the allies of the United States, Taiwan and the Philippines, come and later the US Navy just sails into the sea along the Chinese coast. The Americans are trying to turn the South China Sea into a point of increased tensions between China and ASEAN (Association of Southeast Asian Nations).

In recent years, the US raised the stakes in the Pacific. And it is clear that the confrontation between China and the US will determine the atmosphere in this hemisphere in the coming decades. But the question now is: Is the US ready to switch to an open phase in its policy of containment of China, meaning, to declare China a kind of “second Russia”?! Of course, not! Washington wants as much as possible to play with Beijing in absolute darkness without putting the cards on the table. The US has not yet fully realised all the consequences of the policy of a blockade of Russia. But at some point they will realise with horror that the main result of their attempt to isolate Moscow is the accelerated strategic convergence between China and Russia. The US has yet to experience it.

However, the reluctance of the US to switch to an open confrontation with China does not mean that Beijing will not begin first to raise the tone in relations with America. The point is not that China is not afraid of US plans for missile defense or the growth of the US Navy in the region. In fact, the US cannot locate AMS anywhere else except in South Korea and Japan, but the pace of growth in the Chinese fleet is such that in 10 years, Beijing will crowd with squadrons all the neighboring seas.

Something else is important. When China understands that the Americans are left with nothing but a switch to open geopolitical confrontation, Beijing will act preemptively. President Trump may declare a trade war against Beijing, but China is more worried that President Clinton believes that she could fence China in a hoop and not only China, but Eurasia, where Russians and Chinese will stand side by side.

Spot on. Hilary was a person who sold nuclear program to North Korea. Do some research. I couldn’t believe Trump didn’t know it.

Actually, I think it was her hubby Bill who signed the executive order allowing US technology corporations to sell high technology to China and North Korea (two weeks after the US Congress made it illegal!). But then it’s all in the family.

Thank you for the clarification. As you’ve written it’s in the family.