Hillary Clinton used a child actor during her question and answer session in order to hit Trump for ‘judging women’. 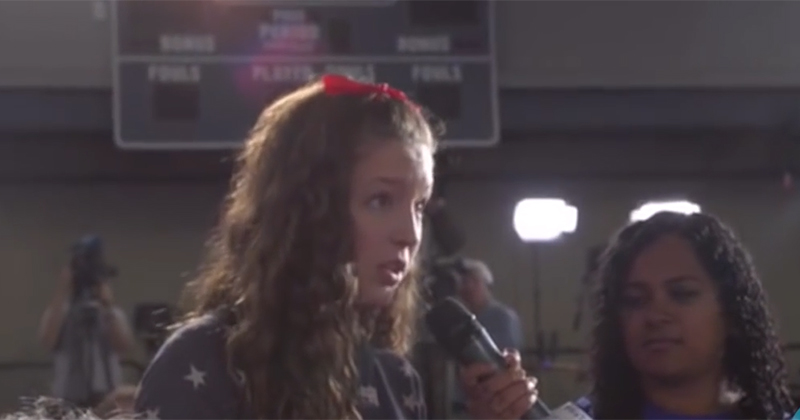 Hillary Clinton has been caught on another ‘false question’, which this time has been set by a child actor, who asked the US presidential candidate about ‘body image’ and the way Donald Trump talks about women.

The question was asked during a town hall event, which took place in Haverford, Pennsylvania, on Wednesday, when Clinton were taking questions from people ‘chosen at random’.

When a 15-year-old girl decided to ask the Democratic candidate about Trump’s past comments on women, it has already seemed a bit too queerly.

After further investigation, conducted by YouTuber Spanglevision, it became clear that the ‘random’ girl was a child actor named Brennan Leach. In addition, the girl’s father is Pennsylvania democratic State Senator, Daylin Leach, who supports the campaign of Hillary Clinton.

“Hi, Madam Secretary. I am Brennan and I am 15 years old. At my school, body image is a really a big issue for girls my age.” the girl said. “I see with my own eyes the damage Donald Trump does when he talks about women and how they look. As the first female president how would you undo some of that damage and help girls understand that they’re so much more than just what they look like?” she asked Clinton.

“I’m so proud of you for asking that question,” Clinton told the girl and started to condemn Trump for “judging women and calling them names solely on the basis of physical attributes.”

“My opponent insulted Miss Universe. I mean, how do you get more acclaimed than that? But, it wasn’t good enough. So we can’t take any of this seriously any more. We need to laugh at it. We need to refute it. We need to ignore it. And we need to stand up to it.” Hillary said.

It is obvious that the thing was pre-planned and fake.

Brennan in a campaign ad for her father

The girl, acting in a movie, entitled “Once Upon A Time Trillium Vein” However, it is not the first time, when Clinton and her team have been accused of using false ‘random people’ during their question and answer sessions. It is something her campaign regularly does.

Weeks before the time when Clinton appeared on Steve Harvey’s show back in February, her campaign scripted an entire interview. The details were revealed in a leaked internal memo. Clinton’s campaign prepared a list of questions for Harvey to ask, and Hillary acted very surprised, when he flashed up photographs of her as a child, as if she did not know he was going to do so. In reality, the entire thing was scripted in advance.

A question arises: is Hillary Clinton able to do anything without her PR team, preparing it in advance? And what does this say about her, a person, who wants to take the post of president, a position that regularly demands quick actions and decisions?

With their track record, why any parent would want their child anywhere near the Clintons defies explanation. It makes ones skin crawl to think of it..