Seemingly shocked that after spending 10s of millions of dollars, she remains only modestly ahead in the polls, Hillary Clinton exclaimed during an teleconference with the Laborers’ International Union of North America, saying, “Why aren’t I 50 points ahead?” Donald Trump was quick offer a three word reason… “because you’re terrible!”

Hillary Clinton has spent several times what Donald Trump has spent to air television ads in key states. That will likely continue; in a new count by Advertising Age, the Clinton campaign and its allied super PACs have booked $145.3 million in ad time between now and Election Day, to $4.4 million for Trump and his groups.

But , as we noted previously, what if it doesn’t really matter?

And so Hillary Clinton asks frustratedly… “Having said all this, ‘Why aren’t I 50 points ahead?’ you might ask?” … Well, the choice for working families has never been clearer. I need your help to get Donald Trump’s record out to everybody. Nobody should be fooled.”

And Donald Trump was quick to respond: (as Politico reported)

“Because she’s terrible,” he said bluntly.

“I mean, she’s had a terrible record. Everything she touches is bad. You look at what’s going on with Libya and you look at the surge and you look at all of her decisions and you look at the Iran deal, which is one of the dumbest deals I’ve ever seen, which she started, and she totally backs, by the way, I mean, in its completed form, she totally backs. You look at everything she touched, I mean, it’s just a mess. And she’s spending a lot of money and so far it’s not had much of an impact because I guess I’m winning in most of these states and we’ll see what happens in the end, but she is [terrible].”

The surprised look on Hillary’s face says it all. She is terrible. Mad eyes.

Terrible is too polite a word to describe her

the real question is why the fuck is she still ahead of 0.9% ?

Because Trump is terrible :D

Maybe so but on balance he is less likely to turn the planet into a radioactive ash ball.

look at the graph she is ready to bounce if the past is any judge, i would prefer she just slither away and give it up

i’m afraid that the marge stay little so they can cheat with trump i prefert that trump win with like 5 to 10 % more at least we would be sure that they cheated if they do 0.9 in her or his vavor doesn’t make me happy yet

Why so much hate against Clinton from Russia??

They know that Clinton is the best choice for CP.

Trump is dumb. Putin can manipulate with him easily.

Only someone that is delusional would write such a comment.

Maybe because she advocates strong support to Ukraine, maybe even to invite into NATO. She throws allegations of cyber attacks and has stated such attacks are equal to war to which she said can be responded to militarily… Then again, Russia did get a good deal on U.S. uranium while Secretary, lol. Trump stated willingness to work with Russia, but pretty sure he will be a puppet to his handlers, just like Clinton; both are toxic.

The fact that she even asked that question is proof that she is unfit to serve.

She is a Zionist, and everybody knows 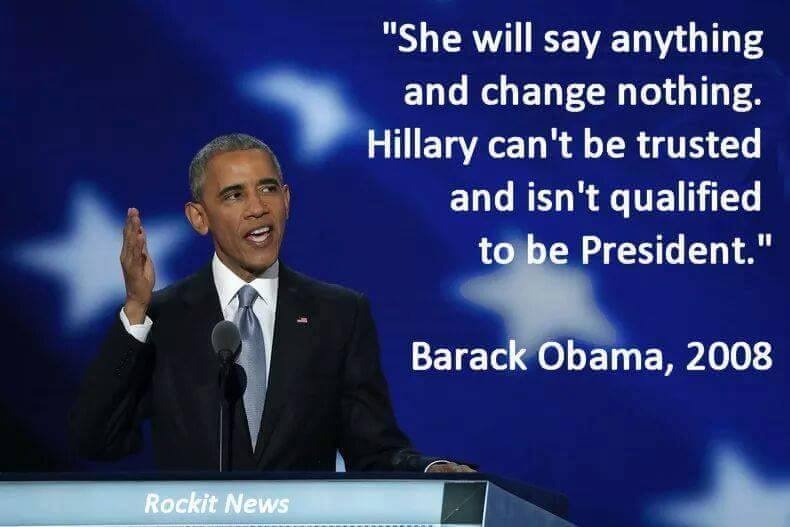 God. am i the only one who sees this?

Hillary you dont have this “50 point lead” because you spend so much time staring off into wonderland whilst constsntly babbling about him. its obvious you wanna jump on his jock.

So do it already. cos this ‘hate’ for him you have is getting annoying! ?