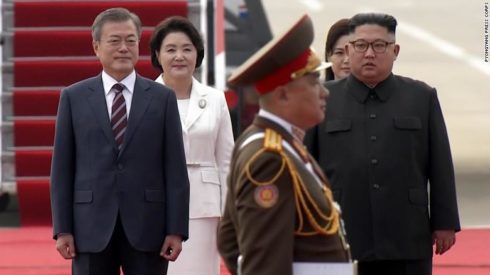 This is the third face-to-face meeting between the Korean leaders in 2018, however, according to South Korean spokesman Yoon Young-chan it celebrated a number of firsts. Yoon told reporters that this is the first time Kim has opened a summit in Pyongyang. The military band, he added, welcomed the South Korean delegation with music usually reserved for the upper echelon of North Korea’s leadership.

It was also the first time Moon and Kim walked down the red carpet at Pyongyang’s Sunan International Airport and the South Korean leader inspected North Korean troops.

The two men, accompanied by their wives, embraced after Moon walked down the steps of his aircraft, before talking for a few minutes ahead of a welcome ceremony and a field gun salute, television pictures showed.

Following the welcome ceremony at the airport and separate lunches, the first session of the inter-Korean summit began at 3:45 p.m. local time, in the headquarters of the Central Committee of the North Korean Worker’s Party.

Leaders from three of Seoul’s political parties were scheduled to meet the Vice Chairman of the Supreme People’s Assembly, An Dong Chun. Delegates who represent civil society sectors met with Kim Young Dae, chairman of the Social Democratic Party.

Following the summit, President Moon and the South Korean delegation will watch a performance of the Samjyun Orchestra at the Pyongyang Grand Theater, located on the Daedong River in Pyongyang.

The first day is to conclude at 9 pm local time.

The primary focus of Moon’s trip is to address ways to reduce tension on the Korean peninsula and ensure lasting peace, avoiding armed conflict. His second priority is to “facilitate North Korea-United States dialogue for denuclearization.”

“I have confirmed the true will of Chairman Kim Jong Un and President Trump several times. I believe that the denuclearization issue can be progressed at a rapid pace if the two leaders face each other again and talk,” the South Korean president said.

Yoon said that Moon would relay the outcome of the denuclearization discussion with Kim directly to Trump during the UN General Assembly later in September.

The US continues to accuse North Korea of not fulfilling its duties under the denuclearization deal, however it has recently become apparent that it is, in fact, the US that appears to be failing its part of the deal. Despite US failure, relations between the South and North appear to be steadily improving.

There has been no press conference or news of the progress of the summit as of now.

There is, however, no shortage of expectations, albeit most of them limited.

According to the Eurasia Group, the meeting “will probably generate rosy headlines but do little to accelerate efforts to denuclearize North Korea.” Kim would push for enhanced North-South cooperation “especially in areas that promise economic benefits for the North,” it added.

In terms of economic cooperation, Moon has been pushing inter-Korean cooperation, but several South Korean newspapers urged caution on September 17th, with the Korea Herald calling the businessmen’s presence on the trip “untimely.” The businessmen in question are including Samsung heir Lee Jae-yong and the vice chairman of Hyundai Motor, among others.

“It is better to postpone economic projects involving the North until after negotiations to remove its nuclear program make substantial progress,” the Korea Herald said in an editorial.

Despite US accusations and limited expectations, the fact is that relations between the South and North appear to be steadily improving, with both sides claiming that they wish to leave armed conflict in the past, which is definitely a welcome outcome.

North and South Korea both come together and build nuclear and ICBM to protect their lands from US and NATO states. They should first shut down the US and NATO military bases in their lands and kick them out.

One forget the nukes, 2 NATO is not involved in Korea, the US considers South Korea to be a colony, and the only country in the world to successfully evict American forces is Vietnam. America has to be destroyed economically, not militarily. They are psycho killers, they would destroy the whole world in a war. If you want to help rid the earth of American oppression, spend 20 dollars on an ounce of silver.

Does it matter? South Korea can’t even build a joint railway without U.S. permission.

Washington Post Quote: ” For South Korea to actually reconnect its rail network to North Korea, it will first have to convince the United States…” Perhaps you meant something else by BS?

NO, but he U.S. does and South Korea can’t do anything with its approval. South Korea is a vassal state.

By what right did the USA divide Korea?

not usa divided. after ww2 was divided. north attacked south with chinese and russian help, usa simply helped to south. and reestablished the status quo. korea was quite another issue than vietnam.

On August 10, 1945 two young officers – Dean Rusk and Charles Bonesteel – were assigned to define an American occupation zone. Working on extremely short notice and completely unprepared, they used a National Geographic map to decide on the 38th parallel. They chose it because it divided the country approximately in half but would place the capital Seoul under American control. No experts on Korea were consulted.

Roosevelt floated the idea of a trusteeship over Korea, but did not obtain agreement from the other powers. Roosevelt raised the idea with Joseph Stalin at the Tehran Conference in November 1943 and the Yalta Conference in February 1945. Stalin did not disagree, but advocated that the period of trusteeship be short.

The US took Korea as a colony, the north tried to expel the American invaders. But the US still occupies Korea to this day.

You get your version of history from Hollywood, the Jews.

And America lied, of course. The US never had any intention of leaving. All the countries the US occupied in WWII, are still occupied today.

What Is Going On?

both parts continue in dialogue. and try to find solution

The 2 Korea’s could reunify, the only barrier is the USA. Both sides will have to tread carefully, because the US will do all it can to create distrust and hatred between the 2 Korea’s. The Americans will try to discredit, overthrow or assassinate President Moon, he is a brave man, most who cross the US end up dead.