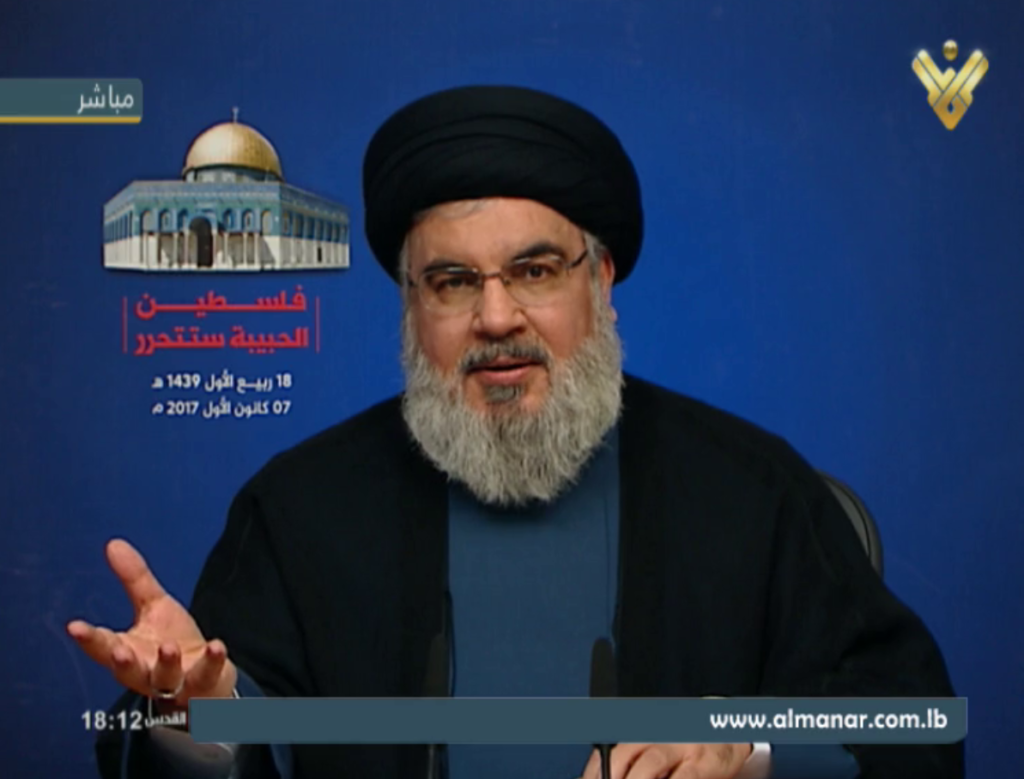 Hezbollah leader Hassan Nasrallah said during a televised speech on Thursday, that Hezbollah supports the Palestinian Hamas Movement call for a “new Intifada” against Israel in Palestine. The Intifada was declared in protest to a decision of US president Donald Trump to recognize the city of Jerusalem as the capital of Israel.

Nasrallah called on the Arab League and the Islamic world to provide a political, media, financial and even military support for the Palestinian people so they can launch the “new Intifada” against Israel.

“The most important response would be a Palestinian uprising and an Islamic summit that would declare Jerusalem as the eternal capital of Palestine … We support the call for a new Palestinian intifada [uprising] and escalating the resistance which is the biggest, most important and gravest response to the American decision,” Nasrallah said during his speech, according to the Lebanese Naharnet TV.

Moreover, Nasrallah questioned the fate of the Palestinians who live now in Jerusalem after it becomes the capital of Israel, and even the fate of the Lebanese Shebaa farms, and the Syrian Golan Heights that the US does not recognize as part of Israel as for now.

The Hezbollah leader said that Trump’s decision should be a “motive” for everyone to hold the responsibility and ignore the voices that will say soon that what happened is “not important”. Nasrallah also doubted the credibility of Israel and the US.

The Nasrallah statement will likely boost the Hamas Movement confidence to start a large wave of protests all over the Palestinian areas on Friday. Such large protests could increase the pressure on the US, Israel and even the Palestinian government.

Palestinians that have lived there during 1500 years will be called to move to Jordan or Egypt and an american isreali or polish isreali will take theirs houses.

Saudis foreign policy controlled by America and Israhell. Why because America wants to sell their weapons and to take their oil money.

If today Saudis say that we will import weapons from Russia instead of America then tomorrow there will be peace in whole Middle East. American and Israhellis are Antichrists.

as
Reply to  Serious

We’ll just see how this end up. None supported the US move not even their wet bed nurses and asslicker the UK and EU. And this decision also coming from an administration full of cracks both in Israel and the US.

“I am from Brooklin, can I have a house in Jerusalem ?”

Of course it does. Iran, playing the Great Game, is looking to goad Israel into starting its genocide wars on Lebanon and Gaza early, BEFORE the Deep State is ready to attcak Iran- thus generating a planetry backlash that can be used to destroy the current plan for the Iran war.

Iran is prepared to sacrifice any number of people in other nations to save itself- whaich sadly is how the Great Game is played.

Israel is vile, demonic, and very stupid (well look which people are in control there- history’s true ‘village idiots’). If Israel can be manipulated to start conflicts with Gaza and Lebanon now, there’s an excellent chance a bloody quagmire can be created that humiliates Israel and has the world hating Trump and May and Macron even more. Of course Israel will murder tens of thousands of innocent people in the process.

On the other hand, the Deep State is ready for the genocide war on Iran NOW- all it needs is the ‘excuse’. If things start to go pear shaped around Israel, look for the false-flag (9/11 size or greater) that the Deep State will use to justify immediate attacks on Iran.

The pieces are in place. Putin has ensured Russia has never been weaker (on the world stage) since the Revolution. China is keeping out of it because Russia has proven so supine. Every key Deep State nation has the correct puppet in charge. They want the support of the sheeple for war on Iran, but it really doesn’t matter now if they mostly don’t have it (see Blair’s invasion of Iraq). Once events start to really move, they’ll move so fast sites on our side will be totally unable to keep up.

Yes, it sounds so stupid no one will read the post.

But, you need to read the post to know if it is stupid or not. It is in fact stupid but your logic is not sound.

Lots of stuff I don’t read. I skim. One really stupid statement stands out like red flag.

Saudis foreign policy controlled by America and Israhell. Why because America wants to sell their weapons and to take their oil money. If today Saudis say that we will import weapons from Russia instead of America then tomorrow there will be no war between Saudis and Yemen. American and Israhellis are Antichrists.

It looks to me like President Trump®’s move was meant to be a provocation. Much of the Muslim world is uniting over this, and calling for reactions that are already including violence. I fear this violence (including that by agents provocateur and false flag operators) will be used as the excuse to expand the wars the AAZ Empire is presently losing.

Or get someone to pay their next debt payment due Dec. 15th.

Yesterday, Erdogan said “Oh, if this resolution is implemented, we will eventually cut diplomatic relations with israel”. XD.

Sunnis are so stupid. They are like babies. You can can money from a baby and he will say nothing. You can beat him or kill him.

Americans uses sunnis corruption to exterminate the Palestinians. Palestinians rely on others than themselfs, what one whould never do.

The Saudi Arabian Sunnis are very stupid and easily corrupted by USA.Saudis worship US dollars.Trump don’t like his only interested in their oil.Saudi block Qatar airspace Trump opposed it.Trump order them again to releaved the siege on Yemen.

Saudi Arabia allows enemies Nato/USA and Israel to kill fellow Arab brothers.USA and Israel asked Saudi king to dethrone Harriri of Lebanon.Now the dollar power have leave the hopeless Harriri who even accused his faeces for not making him fat.

Traitors can run but they can’t hide. Saudis are done.

Iraq,Iran,Hezbollah and Syria are the only countries which supports Palistians and any Arab Muslim brother’s openly.

This is why Trump was installed as President, the big gamble to circumvent QE 4 .with a new Petro Dollar save the Empire miracle, Brexit was a suprise what is happening now is a foregone conclusion, the driving force is interest rates and the 4•5 trillion debt on the Fed’s balance sheet only a massive incident can justify rubbing it out, if its possible to do so. Actually the burden of the 20 trillion US sovereign debt with the value of the USD not inflating against all others currencies probably means that equity denominated in USD will be looking for a safe haven, where will that be I wonder, Hot Money flows with no where to go, ? I recommend buying precious metals.

OH right, debt payment is due December 15th, i believe and they made a big fuss in mid-September (with North Korea threats) and got support then. Maybe this is similiar bluff.

There was a big fuss about hurricane relief of a small amount I think just to grease the media wheels about deficit spending being for the good of the people, and North Korea threats were about a much larger amount I think 65 billion going straight to the armaments industries and the military in general. I was just watching Peter Shiff’s recent prediction and it is very convincing, and he doesn’t even incorporate the North Korean provocation or the Jerusalem statement, what I think is that Trump will try to exit the whole thing now by throwing Kushner and junior Salman under the bus and in his mind he will balance that by sacking Tillerson in a much more nastier fashion, it sounds diabolical but this is the Yankees that were talking about.

Something is up. A trump prenegotiation cloud of dust.

A lot of words have been spoken about Trump’s prehensile tail, and his stacking the deck before he negotiates is legend, for failure, he got the relief for corporate tax through but that was a give away when another party is concerned his MOAB’s is a disaster, the Jerusalem initiative is helpful for Salman to cling to power but that’s about all, Netanyahu and Kushner I can see going the same way as Brazani, I hope they take MbS with them, King Salman will likely survive better without him.

what its good for? how many intifada to launch? even isis doesnt penetrate the boder

Lol they did penetrated the border into the hospital. ISIS the Israeli Stooges Ineffective Slave.

Sure, why wouldn’t they support it? They lose nothing by supporting it and might win something.