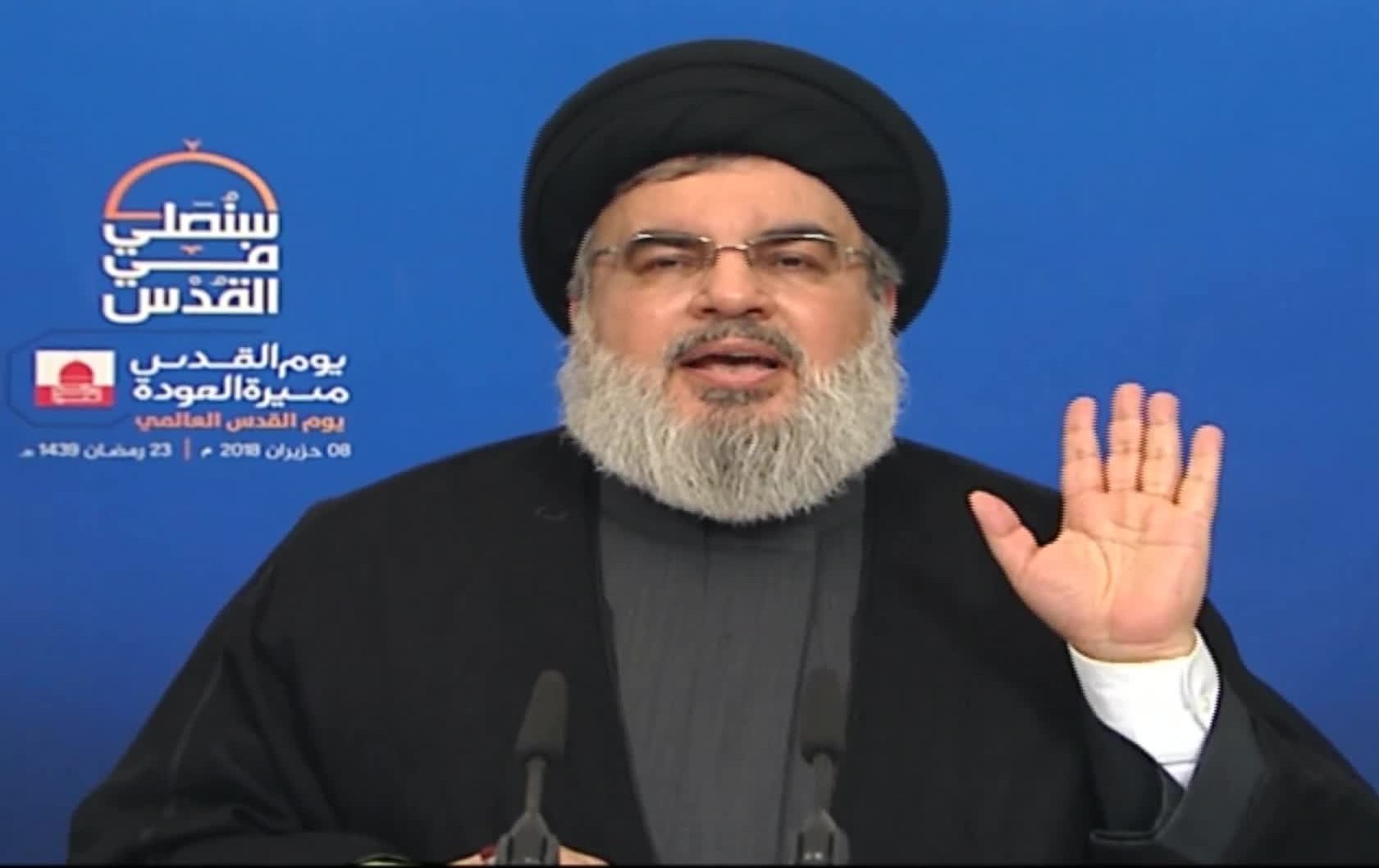 Nasrallah during a televised speech marking the international Quds Day, Via al-Manar TV

On June 8, Hezbollah leader Hassan Nasrallah vowed to keep his forces in Syria as long as Syria’s President Bashar al-Assad wants it there. Nasrallah also warned that Hezbollah will not withdraw from Syria in any other way, even if the world unites against it.

During his speech, Nasrallah stressed that his party entered Syria in the first place to confront “a major conspiracy targeted against Syria’s people.” Hezbollah leader also called on Israel and its allies to admit that they had failed to overthrow the Syrian president and his government.

“You Zionists have to admit that you have been defeated in Syria and that you have failed to topple the pillar of the resistance … I also tell the entire axis that fought in Syria to acknowledge its defeat,” the Israeli Arutz Sheva radio station quoted Nasrallah as saying during his speech.

Earlier this week, several reports claimed that Hezbollah had withdrawn from the strategic town of al-Qusayr in the southwestern Homs countryside as a result of the Russian pressure. Later, officials in the “resistance axis” told Reuters that these claims were baseless.

Israel and the US increased their pressure on Iranian forces and Hezbollah during the last few months in attempt to push them out of Syria. However, Syrian observers doubt that this will happen any time soon, as several radical groups are still present in the southern part of the war torn country, including ISIS. These groups pose a direct threat to Lebanon and its Shia community. This is another reason of Hezbollah’s involvement into the conflict.

Perhaps the second or third best military now in the Middle East. I would rate them Iran, Syria, and Hezbollah in that order.

I would not rate Syria greater than Hezbollah. Hezbollah has stood toe to toe with the Israelis twice and played major roles in Iraq and Syria and probably even Yemen to some extent.

The best infantry in the Middle East is the Hezbollah, not even the IDF with massive air power can beat them, The SAA is now rising from the ashes…………….in few years will be a real army again.

christianblood
Reply to  MADE MAKER

If anyone needs to leave Syria its all the land grab squatters & foreign paid for mercs working to bring down the government not Hezbollah trying to save it.

Lebanese Hezbollah and Iran must unite with Syrian nation and never let them alone to child butchers Trump and Netanyahu.

Not ASK, find a way to push them out by cutting their supplies-ways.

BUT IT SEEMS THAT a Netanyahu-MEDDLING takes place =>> DONALD TRUMP in CANADA by G/ already yelled that RUSSIA has to come back to the G8-RAPTORS-table. A sing to PUTIN to give up some ASSAD-territories and to encourage him to make even MORE concessions to ISRAEL => what comes next? The Big-Summer SELL-OUT? IRAN?

Sometimes I have the feeling that behind the curtains in the Syria conflict, it goes like by a Sotheby’s -Auction.

all bullshit. Russia (and Putin) are the strategic glue among all the debt free nations, from Syria to China. And are the reason for which Israel cannot blackmail other countries using the nuclear arsenal of the United States.

that’s why you zionists heavily invest in propaganda against them and particularly Putin.

as a sidenote, you make me vomit.

US will not go without force.attacking US will cause Operation Syrian Freedom like Iraq.The way left is to instigated and funding rebellion and guerilla war amongst the eastern Euphrates Arabs against US and US backed forces (somekind of Afghan mujahideen).

A message to Russia that it can’t pressure it to leave.

Wise Gandalf
Reply to  as

We’ll see how morally LOW Putin will go, by his attempts to return to the G8-raptors-table and trying to marry Bibi Netanyahu and please at the same time that Islamist “Muslim Brotherhood”-a##hole & “Osman-Trump” Recep Tayip Erdogan.

as
Reply to  Wise Gandalf

Nope. Beyond their influence.

At least one that speaks clear-text, without verbal Hippy-flowers around the kernel of the matter. It would have been more elegant to say “as log as President ASSAD needs us” : that means…….. almost .. forever :))))

you know one thing that israel can’t stand about iran?

israel’s cause is to suppress the palestinian cause, and in this respect, saudi’s reactionaries are pretty much allied with them.

What do Israel, Saudi Arabia and the US military industrial complex (Deep State) have in common? They all murder men women and children for the sake of profit. The worst one of the bunch though, no it’s not the Saudis, but Israel. For the US and Saudis kill unarmed defenseless civilians from the air, Israel and it’s brave IDF enjoy proving their manhood by beating and imprisoning 3 and 4 year old children, as well as murdering unarmed medics, reporters and a host of other unarmed civilians using snipers. Personally, I believe Israel outdoes anything Hitler did against it’s prisoners. The Nazis exterminated their prisoners, Israel gets enjoyment and delight at causing everlasting pain to unarmed Palestinian civilians of all age and gender brackets when they’re not just outright murdering them.

yes, but those are “cosmetics”, however terrible they may be.

What is relevant here?

The answer is another question: “What are the Israeli, US and Saudi strategic goals?”

We all know that these countries kill civilians, sponsor terrorism and sometimes openly support it.

But we should not stop at their methods, we must see their aims:

A world ruled by zionist financial elites with unlimited control over all the natural, human, and technological resources. In this world, 99.9% of all the planets population will only exist as slaves to those elites. Their lives, well being, and human rights will only be instrumental to such function.

And make no mistake: it did not start today, or yesterday. This plan has started many decades ago, possibly centuries, as these elites progress in history with a monarchic style system of heirloom.

The part that people tend to disregard most, is about money.

At the end of the plan, ALL the money will be in the hands of the slaves, while ALL the riches in those of the masters. Game Over. At that point, when it’s too late, people will (perhaps) realize the real value of things.

“The answer is another question: “What are the Israeli, US and Saudi strategic goals?””

Always to rule the masses whether through money or military means. It’s a genetic human defect that always seems to have the worst of the worst psychopaths attaining the reigns of power. As for Zionism, it is but a vehicle for theft and power, no different from any other knuckle-dragging group.

Its an extension/expansion of Agenda 21 John………………….its about culling , in any shape or form, until the number of “Slaves” are acceptable to the elite. But the more pressing question is:- “What purpose will this serve the elites ? AND will they be truly revealed for what they are ??????” ( We are entering esoteric territory )

but, if this refers to the elites, i think we are already showing that some people (discussing this proves it) have a rather clear general idea about this.

I agree it’s esoteric territory, but too many events in these years show that there is a single, definite entity (the elites) acting as “the devil” of this situation.

Hezbollah forever, the Zionist Netanyahu almost thought that he succeeded in pushing the Quds and the Hezbollah out of Syria by going and sucking the dic* of Putin abit and around, but that will not work you zionistical idiotic fuckheads. The world does not own you any more favors just for your sake, you are scared shitless from the Quds and Hezbollah been close to your border and crying to everyone in the world, first the americans now you cry to the russians who will be next no one, now Turkey will start helping your enemy and you will be fucked. You spilled too much palestinian and syrian blood, it’s time to return to you.

It is with great sadness that we hear the notion of *Hezbollah having to move out of Southern Syria* or *Iranian forces have to vacate all of Syria*. For to even pause politely at the suggestion of such idiocies is to concede that just maybe the various Iranian backed militias were not key to the destruction of Wahabist militants ravaging the country, and Hezbollah and other Iranian forces weren’t the bulwark that broke the backs of these Saudi inspired, Israeli supported monsters stalking and smashing there way through Syrian civilization. The instant Nuttyahoo suggested that Iran wouldn’t be tolerated in Syria, Assad should have called the Iranian ambassador, and inquired if Iran could send more troops to protect Syria from US squatters. Syria needs its army back to full strength, which takes money and time. Until then, demanding Iranian backed forces leave is like asking Assad to surrender, there’s almost no difference.

If Carlsberg made leaders

Hezbollah………………Party of God, soldiers of the one true faith, God Bless them and their leader.

Of course the politicians exaggerate, but what he does mean is that they aren’t going to leave because of international pressure. Oddly enough, I think the US and Russia would both prefer if Iran left Syria but Iran is revealing that it won’t give up its foothold now that they’ve got it. To think, all that has to happen is for someone to convince one man (Assad) that he does not need the Iranians in order to achieve his goals.

The defeat of Israel in Syria, and the eventual liberation of the Israeli occupied Syrian Golan Heights, and the end of the Zionist “Greater Israel” will peace reign in the Middle East.

Hezbollah has a truly great leader in Hassan Nasrallah.