The morning of February 24 was marked by a statement by Russian President V. Putin on the provision of military assistance to the Donetsk and Lugansk People’s Republics. The decision was made following the demands of the DPR and the LPR for military support.

The main objectives outlined by the President are the demilitarization and denazification of Ukraine and the protection of civilians in the DPR and LPR.

At the moment, the situation indicates a military operation by the Russian Army. The territory enshrined in the constitutions of the DPR and LPR is being liberated from the Armed Forces of Ukraine.

The main strikes are carried out against military infrastructure located on the territory occupied by the Ukrainian army. Importantly, Russian weapons are not striking civilian infrastructure.

According to the Russian Ministry of Defense, the Russian Armed Forces took out the military aviation and air defense infrastructure of Ukraine.

Two Su-24s of the Ukrainian Armed Forces were shot down near the villages of Smeloye and Stepovoye. According to the LPR People’s Militia.

The following video shows the damage in the air defence military base in Mariupol:

The Romanian Air Force intercepted and grounded a Ukrainian Su-27 that had fled from the scene of hostilities.

Armed forces of the DPR and LPR are advancing toward the republics’ borders with Ukraine. Such settlements as Schastye, Stanytsia Luhanska, and Lopaskino have now been liberated from occupation by the Ukrainian Armed Forces.

Many UAF military formations have been pushed back from their positions. The staff of the 53rd Brigade is withdrawing from Volnovakha and hastily leaving the city to the opposite side of the line of contact.

The Ukrainian military are fleeing and crushing civilian vehicles with equipment.

UPDATE: 42 Ukrainian border guards crossed into the territory of Russia in the Bryansk region and Crimea – The Federal Security Service of the Russian Federation

According to LPR intelligence, it is noted that UAF fighters all along the line of contact refuse to follow orders from the command and leave their forward positions. According to the DPR, the headquarters of Ukraine’s United Forces operation in Donbass has been destroyed.

Some Ukrainian soldiers surrender. For example, video shows the positions of the 53rd and 57th brigades of the Armed Forces of Ukraine.

A military column of the Armed Forces of Ukraine was destroyed on the border with Crimea.

The Russian army is advancing in the South of Ukraine. The Russian military columns were spotted near the towns of Genichesk, Novaya Kahovka and throughout the Kherson region. Earlier, the Russian assault forces were deployed there.

It is reported that the UAF recaptured one of the roads near Kharkov. First casualties in Russian ranks were reported. 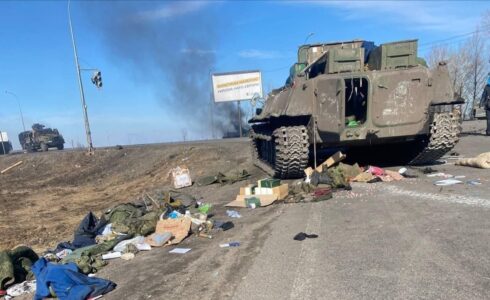 At least one Russian helicopter Ka-52 shot was down from a Stinger MANPADS in Gostomil. 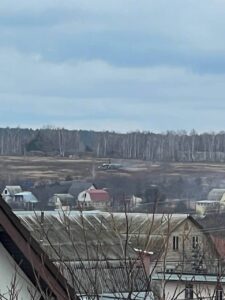 At the moment, a military column with no identification marks is passing through the town of Brovary, heading towards Kiev.

Russian Helicopter Assault Force over Vyshgorod, to the north of Kiev :

NATO Secretary General Stoltenberg claimed that the Alliance is not going to deploy its forces in Ukraine, or close the Bosphorus for Russian ships.

Unfortunately, according to reports from pro-Russian media, there are is panic among the Ukrainian civilians. People are leaving for the western parts of the country. From there, some are on their way to EU territory. There is also information about the direction of the flow of civilians by the military. According to experts, the military may use civilians as a shield against Russian strikes.

According to information provided by both pro-Russian and pro-Ukrainian media, including Telegram channels, the main target of the Russian army will be the main functionaries of Ukrainian Nazi groups and movements.

If they have any sense they will be on the run,the militia in Donbass are after them as we speak and the Ukrainian army is being destroyed,its been a long time coming.

They are idiots who broadcast themselves over radio on front lines – they will be hunted down.

KA-52 looks recoverable, no signs of any dead pilots/navigator, so good news.

Don’t seem a stinger, I see a lot of bullets holes.

Stinger does have shrapnels.

I saw one report that 1 pilot was captured…..can’t remember where I saw it ..sorry If so I pray they treat them humanely Blessings L

NATO has no role here. Ukraine is not a member state so cannot call on Charter 5 of defense pact for formal NATO members. The Ukrainian regime has actively attacked its own domestic provinces in the east for years, shelling provinces closest to Russian border. Russia is free to make its own choice about sorting out this foreign instigated mess along its western-most flank. And when Ukrainian pilots flee to Romania in Su-27’s, it’s clear the best trained of Ukrainian military wont really fight for the US Neo-Con installed Kiev regime.

The Ukraine is regularly screaming that they will need to get them nuclear weapons when NATO does not commit to their demands. As a German I know how noisy and annoying the Ukrainian ambassador to Berlin acted the last year, they wanted Destroyers, Frigates, submarines and so on. Other countries who seek or even think loud about getting nuclear weapons get instantly demonized and isolated by NATO.

Zelensky had a big mouth the last few days. Now look at him. Pleading for help from his new best friends. But as anyone could tell, they will support him from within their cushy seats only. How unfortunate for him.

The Rus based International Order.

And the bidding war starts now :-)

And they are using old weapons ( except for Kalibr ).

Knock out Ukies air defense and air fields with missiles – then roll in with older armor – this means NATO struggles to identify it is not Lugansk and Donetsk militias under full Russian support. NATO use same hybrid tactics all the time – Qaddafi was really tracked and hit by French air force jets but in media all we saw was ‘rebel’ stooges on ground who had the filmed final act of stabbing him.

Do you think they will take Mariupol?

No nead to take it. It will surender when ther will be no Ukrainian army east of Dnjeper river.

I think all of Southern Ukrainian Steppes shall be Novorossiya.

Jens? Jeeeens? Any comments about this? Don’t let Yamil do all the trolling by himself!

Jens is crying like a baby who soiled his diapers. His world has collapsed on him today.

I wonder what will happen to the murican bioweapon labs?

They are mostly in Georgia – Ukraine too unstable.

They were just eager to help de-nazify Ukraine like their forefathers did. They got carried away. But you’re right, those things can fly.

“NATO Secretary General Stoltenberg claimed that the Alliance is not going to deploy its forces iue?n Ukraine, or close the Bosphorus for Russian ships.”

Everyone knows that NATO is just a bunch of coward criminals who only invade rather defenseless countries. A superpower like Russia they would never even dare to stand in the way. Is like they say, a barking dog never bites.

They fled Ukraine beginning Monday when they new Russia was about to step in and end that criminal shelling of the breakaway regions. This time they made sure Russia would go in as they advised Ukraine to shell civilian buildings, especially schools, kindergardens and hospitals. They probably also told them morons they will help, if Russia would dare to invade. Zelensky was talking all the time, that there will be no war and no invasion. The biggest moron of them all actually believed it.

People, don’t let us forget, those soldiers out there are risking their lifes to bring an end to the criminal NATO cabal. Be respectful, since we not a part of it, we are just a bunch of spectators! Russia took a burden on itself, a big one. People will die on both sides eventually, also innocent ones. This was only the first move. Let’s hope it will be the last. Hard times are in front of us. On both sides!

Don’t let NATO kill the truth. Do you part and educate people, open their eyes and show them what is really happening and had been happening right in front of them all the time.

Only military infrastructure… well, in a very broad sense. In Genichesk a bridge was destroyed, in Kiev a power station. But it’s mostly military, for sure. Russia doesn’t seek to destroy Ukraine as a country but to incapacitate their military.

In time of war, bridges are considered as military infrastructure.

Soon as Zelensky took delivery of advanced weapons from Nato states, starting spouting on about seeking a nationalist nuclear weapons programme (Russian RED-LINE) and signing a Cassus Belli Nato-lite pact beyween Ukraine, UK and Poland he sealed his future and triggered off the Russian-led counter-revolution of today. Idiot.

He is not only an idiot. How can a “comedian” run a country? How could the people of Ukraine make this pile of (…insert your favorite insult here…) their official representative? He was a useful pawn and had been played like a dumb schoolboy from the beginning. But now the world can see again what it means when you align yourself with EU / USA and NATO. They are not your friends and will abandon you the minute you fulfill your purpose. Well done Zelensky!

What a incompetent admin. Instead of deleting trolls, SF help them trolling by publishing pictures of dead Russian soldier on the main page.

My thoughts here are Zelensky was attempting to construct a ‘dirty’ bomb. Hence the fighting around Chernobyl and the haste of Russia to accomplish key military objectives so rapidly. If so, what foreign assistance was being given to the NeoNazi Kiev junta?

Russian army annihilates US naval base in Ukraine The Ukrainian Navy has been completely destroyed.

In less than 40 minutes after the start of the war between Ukraine and Russia, the Ukrainian navy was completely destroyed by the Russian military, Avia.pro website reports.

Numerous reports on this subject circulate on the Internet. Many refer to the fact that Russia targeted Odessa and bases of the Ukrainian Navy both in the Black and Azov Seas.

It was reported that the Russian troops landed in the largest ports of Ukraine. According to unconfirmed reports, the Russian military captured the city of Mariupol, although there is no official comment to this from the Russian Ministry of Defense.

The Russian military have reportedly destroyed the US naval base in Ukraine.

The US base was destroyed in Ochakov, the Nikolaev region. The United States military have been building it since 2017, calling this facility the ‘Naval Operations Center’.

Russian President Vladimir Putin specifically spoke about the US naval base in Ukraine’s Ochakov in his address to the nation on February 21.

On February 24, Putin announced that he had decided to launch a special military operation in the Donbass to demilitarise and denazify Ukraine. https://www.youtube.com/watch?v=ULLGiAppJeM

Russia is doing a Great Job protecting Russia. What is the mission of the US Military’s invasion and occupation of Syria 3000 miles from US territory where the US killed 70 women and children in one strike in 2019? “Protect the Oil”

A dead Russian is a good Russian

Timmy the Dragon
Reply to  CIABOT

Putin’s Operation Barbarossa, but not nearly as grand