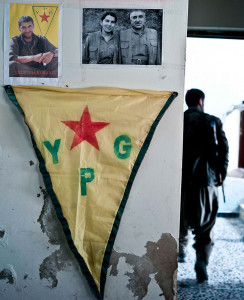 The center of the city of Diyarbakir in Turkey is the site of heavy fighting using machine-guns and artillery, according to RIA-Novosti reporters on location. Artillery volleys can be heard throughout the city.

Emergency vehicles were seen heading toward the scenes of fighting under police escort, probably to evacuate the wounded.

The center of Diyarbakir, which is considered to be the Turkish Kurds’ “capital”, contains the historic Sur area. It consists of several architectural monuments and is surrounded by a fortress wall several kilometers long which dates back to 4th Century B.C. This fortress contains ancient churches and mosques. The Sur area has become the site for a confrontation between Kurdish PKK fighters and the Turkish army and police.

The area is surrounded by the military which is firing on Kurdish positions.

Turkish authorities instituted a curfew in December in several Kurdish towns in the country’s south-east, including Sur, Jizra, and Silopi of the Shirnak province, and also in Nusaybin and Dargechit of the Mardin province. There is street fighting in Jizra and Sur between Turkish security forces and the PKK which is banned in Turkey. According to Turkish reports, over 750 Kurdish fighters have been killed since the start of the operation. Kurdish activists, in turn insist that the majority of the dead are civilians.