On October 22, heavy clashes resumed between the Syrian government forces and the Al-Nusra-led coalition of militant groups rebels in the Syrian city of Aleppo. Especially heavy clashes were reported in the southern neighborhoods of Aleppo: Amiriyah and Sheikh Saeed.

Some sources report that the Syrian army and its allies launched a fresh offensive on the positions of Al-Nusra & Co inside the city. Pro-government media outlets argue that the government forces were repelling the terrorists’ attacks.

Air strikes have been reported inside and outside Aleppo since October 21. According to local sources, the Russian Aerospace Forces have been focusing on bombing al-Nusra’s supply lines in the southern Aleppo countryside while the Syrian Arab Air Force have delivered unspecified number of air strikes in northern Aleppo.

The Syrian army, Hezbollah and Harakat Hezbollah al-Nujaba (an Iraqi pro-government militia) deployed in total up to 4,000 fighters to the area of Aleppo within the ceasefire.

Al-Nusra and the so-called ‘Free Syrian Army’ deployed some 1,500 fighters, over 10 units of heavy military equipment and some 20 vehicles equipped with machine guns and mortars. The total manpower of the joint terrorist forces outside Aleppo city is about 12,000 fighters. The Russian Ministry of Defense informed that the terrorists received additional arms and military equipment, including portable anti-aircraft missile systems (MANPADS), and now they are preparing to attack the government forces from the southwestern direction.

As it was expected, the US-backed ‘opposition’ (al-Nusra & Co) has rejected all humanitarian proposal by Russia, Syria and the UN and denied the plan to withdraw from Aleppo, peacefully. So, intense anti-terrorist operations in the city will be resumed soon.

Meanwhile, the Russian sole aircraft carrier ‘Admiral Kuznetsov’ is heading to the Syrian coast in order to participate, according to reports, in Moscow’s military capmaign in the coutnry. This deployment clearly indicates that the Russian military is expecting further escalation in the region.

The Syrian army is deploying military equipment to Aleppo city: How the hell are they getting reinforcements and ammo?

Do not understimate the power of Washington, Tel Aviv and Riyadh to reinforce their war toys.

Are you kidding? The poorest country in the ME Yemen Houthi are handing the Saudi their arses in Yemen and now over the border in Suadi Arabia. Hence the US Kerry frantic cry for US false flags in the Yemen to bring in US to save SA.

outside Aleppo city, not inside

Ah thanks I see….it makes you wonder how the terrorists have held out for so long since they’ve been cut off for 3 weeks now. Surely they’re running out of ammunition.

surely not, they’ve stockpiled ammunition for years. also all the many ceasefires and the Jabhat Fateh al-Sham siege break not that long ago gave them access to even more munitions, they’ve stockpiled enough to engage in intensive combat for months. Months aren’t eternity though, seems like all the salafists turned their heads towards hama,rif-dimashq, quineitra and latakia. so terror groups inside eastern and southern aleppo will be defeated 100%, jsut it will be slow and painstaking process

not 100% Igor, if the turks succed to occupy Tall-rifat then FSA will be able to attack SAA from 3 points: southern aleppo, from inside the city and northern aleppo, I think SAA should be airstriking the city of Marea, up north from Aleppo and suppling material to the kurds so they can stop Euphrates operation

I would like to believe SAA is smart enough to not engage Turkey right now. If Turks have such an intention then Assad should let them do the first firing. This way, as they always claimed, international law will be on their side and Russia can attack them.

If SAA does the attacking first, Turkey may put boots on the ground, which will be a disaster for Assad. Turkey’s army is spilit into 5(east, west, north, south, south-west) in different regions in Turkey but just that east flank has around 430.000 soldiers alone. Let alone 430.000, SAA can’t handle even just 15.000 right now.

They have to act smart and try to keep Turkey out of this, unless Turkey fires the first bullets.

Totally true, the trouble is that they (turks) mixed terrain troops with the rebels, so it’s actually difficult to target rebels on Euphrates operation without hitting turks, that’s why I think Assad need proxies, like the Kurdish to fight in the north.

The only I’m affraid is that Syrian air force might eventually shoot down Turkish jets, releasing the turkish agressions towards SAA.

But as you can see Marea and Tall-Rifat are 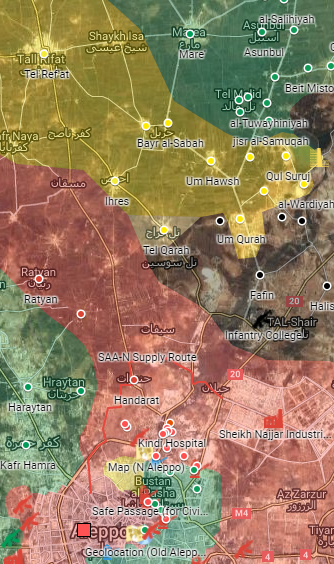 True. I don’t think FSA can seize Tall Rifat. Their numbers are very low in that operation. I mean, they will, but it will take like 3 weeks.

YPG can not hold Tall-Rifat forever. I am following their local twitters and number of casulties are already over 100 for YPG. They are literally bleeding to defend these positions. But they can not do it forever. Constant shelling from tanks and Grand Rockets and missles and on top of that F-16s keep hitting them. Afrin kanton is already a weak one compared to other places. They can not hold.

Solution? I don’t know. If I was YPG commander, I would pull back. Giving so many casulties is meaningless as of right now.

Remember that Iran has as large a military force as Turkey in ground forces and is part of the coalition. This Russian reconciliation with Turkey is being felt out but let there be no mistake Syria will be whole again. NATO and the despots in the ME will not. Humpty Dumpty comes to mind.

I would think being an uninvited Army occupying the Syrian state would cover international law. Not really an issue of who shot first if it takes place inside Syria? no?

FSA isnt in south-western aleppo, its Jabhat Fateh Al-Sham and their salafi allies there mainly, inside Aleppo is dominated by non FSA groups ,the aforementioned JFaS, Ahrar al-Sham and Harakat Nourideen Al-Zinki. Also to claim that turkey is going after Aleppo and gonna launch full scale assault from north onto army’s positions would be crazy, Russians would hammer their asses too hard, economically, militarily and politically.

To get an idea of the tunnel systems likely emplaced under aleppo look into drug cartel tunnels running under the us / mexico border. Most of the reinforcement is to the gangs outside eastern Aleppo but eastern Aleppo gangs are likely able to move personnel in and out and carry out limited resupply through tunnels. Hopefully,if there are many tunnels, the saa and allies are working to find and use them for their own gain or destroy them.

The only way Russia and Syria to defeat terrorists is to hit them real hard because they refused a peaceful exit in order they can save there lives. This time there will be no blame.

They need to take them out now. The Turks are positioning themselves and the “Free Syrian Army” just north of the city to break through and end the Syrian Army’s siege.

Agree, I see no other way around it as it is coming. ISIS folds whats left of it joins in with the Turkish FSA. They will go after the SAA first chance they get. Turkey already backs them and will continue to do so. Some sort of face off is bound to be coming.

Turkey has bit off more than it can chew already. Them tangling up with SAA is gonna very one sided with SAA being the favored.

This isnt Kurd Killing in thrir own backyard 0. This isn’t Turks vs. 10-20 PKK soldiers and 10,000 unarmed civillians… The guys in Syria SHOOT BACK

Saudi Barbaria is fairing the same in Yemen – birds of a feather..