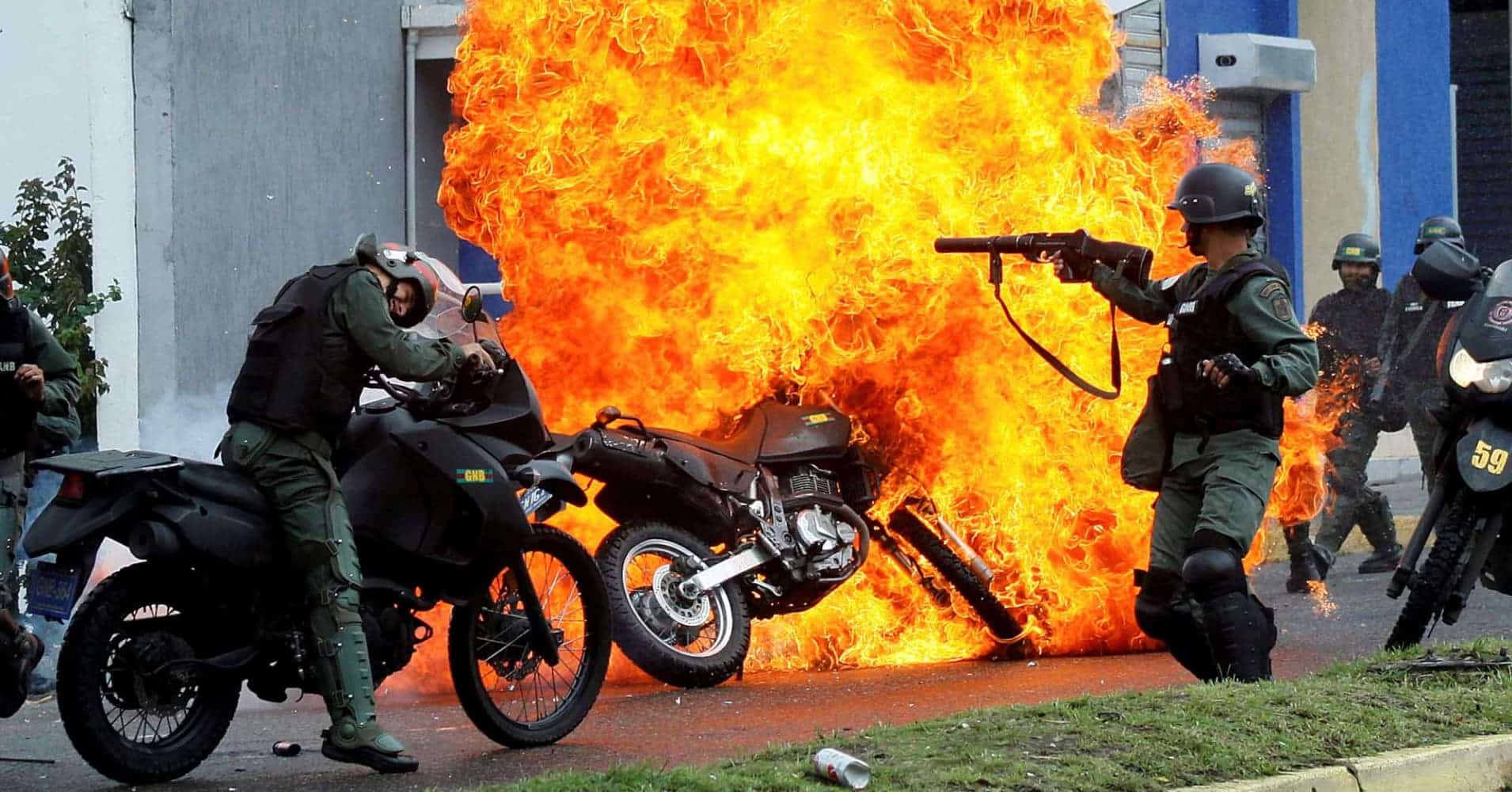 On July 8th and continuing into July 9th, Venezuela’s capital Caracas is in chaos after authorities closed down roads due to intense firefights between security forces and the Cota 905 organized crime gang.

Authorities have not released any numbers of casualties and it is unknown how many people have been killed or injured.

The group is attempting to expand the territory it controls in the capital.

CICPC officers in cover being shot at by Cota 905 gangs #Venezuela pic.twitter.com/rob69fB5fG

Heavily armed criminal groups have moved in the past month to residential and commercial areas from slums in the city’s hills, and violence has exploded over the past 24 hours with gun battles breaking out in at least five populous neighborhoods.

“State security agencies continue to be deployed in the areas affected by these criminals,” Interior Minister Carmen Melendez wrote on Twitter.

She said some highways in the areas were closed as part of the operation, and urged members of the public to stay at home.

Since January, gangs from the Cota 905 barrio have been trying to expand their territory into nearby areas including La Vega.

“We haven’t been running the kitchens at full capacity since January because of the shootouts nearly every day,” said Amelia Flores, 58, who runs two soup kitchens, primarily for children, in the area. “I don’t what happened, but in the past 24 hours the situation has exploded and the kids are traumatized.”

The gangs want to control one of the main corridors linking the capital with the west of the country, said a human rights activist based in one of the affected neighborhoods.

Analysts say gangs in Cota 905 have been able to operate with ease as it has been a no-go zone for security forces due to a pact with the government to lower violence. Experts say the gangs took the opportunity to acquire military-grade firepower such as grenade launchers, assault weapons, and drones.

Can you hear the gunfire in the background?, just got this video from a friend that lives in the area.
12:34 pm 8 of July.#Caracas #Venezuela pic.twitter.com/lTfouJTq8x

The gangs even seized a VN-4 armored vehicle from the security forces.

In el Valle the gangs have seized a VN-4 armoured vehicle from the GNB #Venezuela pic.twitter.com/gTaXuOsilh

To curb the violence and attempt to put the situation under control the Venezuelan government cut power to the areas under Cota 905 control.

Government security forces cut power to the Cota 905, where most of the gang members dwell, and are hitting hard with a FAES style operation—similar to the OLPs (a series of armed raids in certain poor neighborhoods with a pattern of extrajudicial killings).

Social media is filled with various footage of violence.

“A woman shot and wounded on Av Baralt, in front of the Quinta Crespo market. Antisocials from Cota 905 continue firing towards the area”

“It is not in Afghanistan, it is in Caracas Venezuela. This is the anxiety generated by criminals in the surroundings of Cota 905, El Cementerio, El Valle, El Paraíso, Quinta Crespo, Avenida Victoria, El Helicoide”

The gangs also have police radios and are issuing warnings against security forces, saying they will blow up their vehicles and kill them.

The authorities also published some photographs with the names of some leaders of these gangs with rewards ranging from 50,000 to 500,000 dollars.

The situation is still developing and there is no clear end in sight.

The CIA and their Colombian dope peddling puppets have just killed the progressive president of impoverished Haiti and are sponsoring these criminal terrorist gangs all over south America. In Mexico, the CIA controls the cartels, just like in the original narco terror state Colombia.

Those Organized Crime Gangs are closely allied with the Ultra-Right-Wing fracmented so-called ‘Opposition’ so the corrupt white Elites/Oligarchs who run the Black-Market, they kept lot of goods out of the stores so little people can’t buy anything exepct you have loads of USD it’s a economic weapon against the ordinary people to punish them for supporting the Bolivarian Revolution. The Traitor Juan Guaidó is very good friends with some Colombian Narco-Terrorist Cartels as well.

Yes, the Venezuelan Right is still living in Venezuela they can travel to the rest of South America, begging for funds and attacking the Maduro Government. A propaganda war raised by the money of same Right Wing sectors of South America. Also forget to say that the Navy Officers of South American states have close links to the CIA and Opus Dei/Masonry etc

These people are pure evil. This is how you would expect Satanists to behave.

yo666
Reply to  Americunt terrorists

in Mèxico the usa goverment controls all of politicians, no matter what ideology they have

Do you know what the yanquis called Zion terrorist groups? “Gangs” LMFAO.

Americunt dipshit terrorists
Reply to  A clown like you

The Government will have to go in and go in hard against this filth,don’t try arresting them kill them on sight,if their leaders are captured execute them on the spot,they call them gangs but you can bet they have connections to the Fascists in the Country and they have connections with the US Reich.

It is appalling that in this day and age, the hubris laden Americunts would use the murderous Colombian narco terrorists from the military to kill an elected popular president of Haiti in broad daylight. At least 6 of the captured terrorists have US passports and are active members of the US military and rest are US led Colombian right wing death squad special forces. This is worse than the bay of Pigs failed invasion of Cuba. Poor Haitians will suffer even more as they are the poorest country in the southern hemisphere as the Americunt Jew Bilderberg corporations have looted the place since the Papa Doc era.

No surprise, the CIA is literally ‘Co-Founder’ of the Colombian Narco-Cartels and uses their Narco-Terrorist as Mercs for their dirty works.

Venezuela forces should not stop operation and finish this gang once for all . otherwise this same gang will work with Cia to destroy country with violence’s and drugs. its time to bring down all criminal gang. and issue warning to all who is holding illegal’s guns

Venezuela was not part of the the Jews’ grift-dollar system, had gold, and has oil. Like with Libya, the plundering and destroying Jews couldn’t help themselves but sow poverty and human misery while trying to get their hands on it all.

Using indigenous gangs would be a last resort effort by western imbeciles to try to destabilize the government of Nicolas Maduro. They will fail yet again. Live 24/7 news from TeleSUR english.

“Let the dogs of the empire bark, that’s their job; ours is to battle to achieve the true liberation of our people.”

How’s Venezuela going to take on ZioAmerica when they’re having trouble fighting some criminal gangs ?

By paying you to post stupid crap on SF. Strap on your diaper, bedwetter.