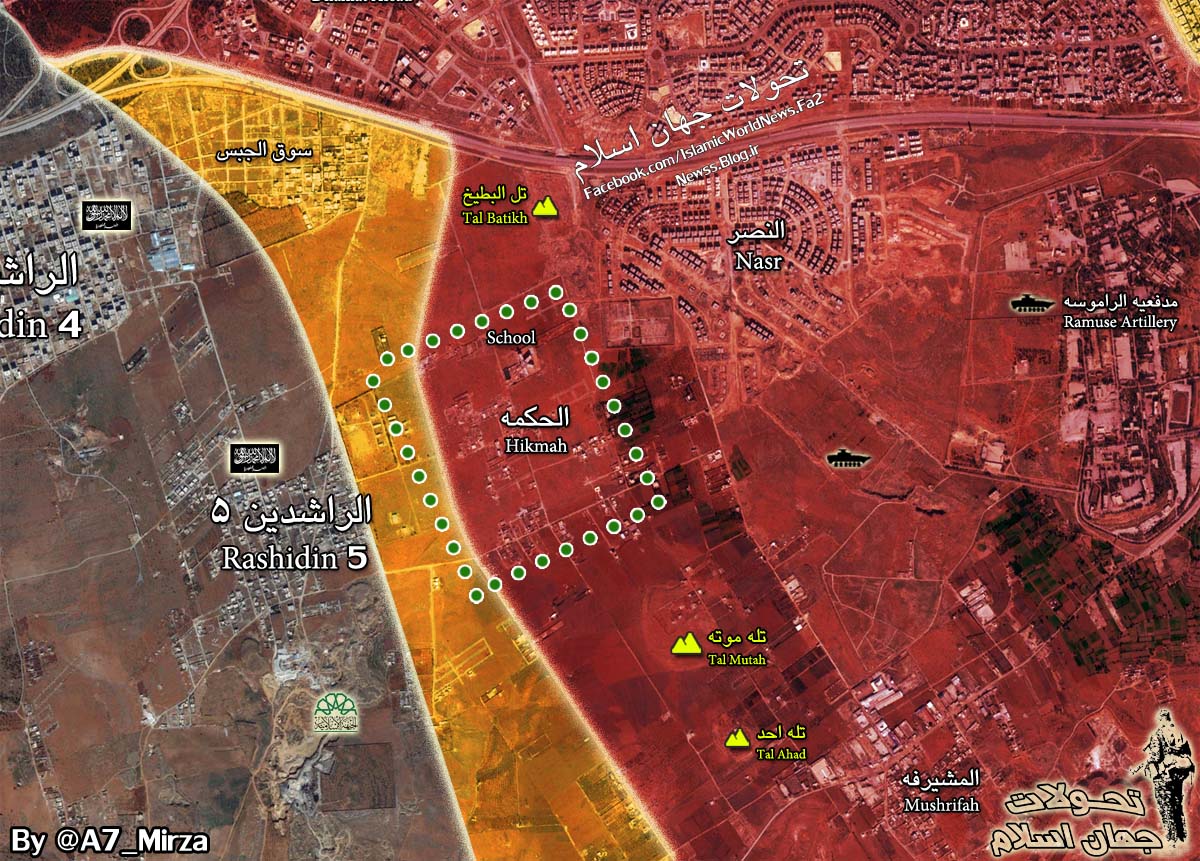 On August 1, Jaysh Al-Fateh and Jabhet Fateh al-Sham units captured the 1070 Al-Hamdaniyah Housing Project and Hikma school in southern Aleppo. Following this success, jihadists continued an offensive in the direction of the Artillery Faculty and the Al-Assad Military Academy where they were involved in heavy clashes with the Syrian Army.

If the Al-Assad Military Academy is recaptured, jihadists will be able to formally lift the siege from the jihadi-controlled areas of Aleppo city. However, even in this case, deliver of supplies to the area will be difficult. According pro-government sources, Russian warplanes conduct air raids in the areas of Al-‘Amariyah, Hikmah School, Al-Ramouseh and Sheikh Sa’eed in order to assist the pro-government forces repelling the jihadi offensive.

On July 31, various jihadi factions, including Jabhet Fateh al-Sham (Al Nusra Front), Ahrar al-Sham, al-Jabhat al-Islāmiyyah (the Islamic Front), Jaysh Al-Fateh (Army of Conquest), Ajnad al-Sham and Suqour al-Jabal united efforts in an attempt to break the siege from east Aleppo that had been set up by the Syrian government forces earlier this week.

Initially, the main goal of the militant advance was to re-open the strategic Castello Highway that leads to the militant-held areas of Aleppo city. Nonetheless, the jihadists were able to develop the momentum in southern Aleppo. This shited the attention of the jihadi forces.

Now the most important and heavy clashes are ongoing there. If pro-government forces are able to repell this attempt, they will be able to start full-scale operation to liberate the militant-controlled parts of Aleppo city. 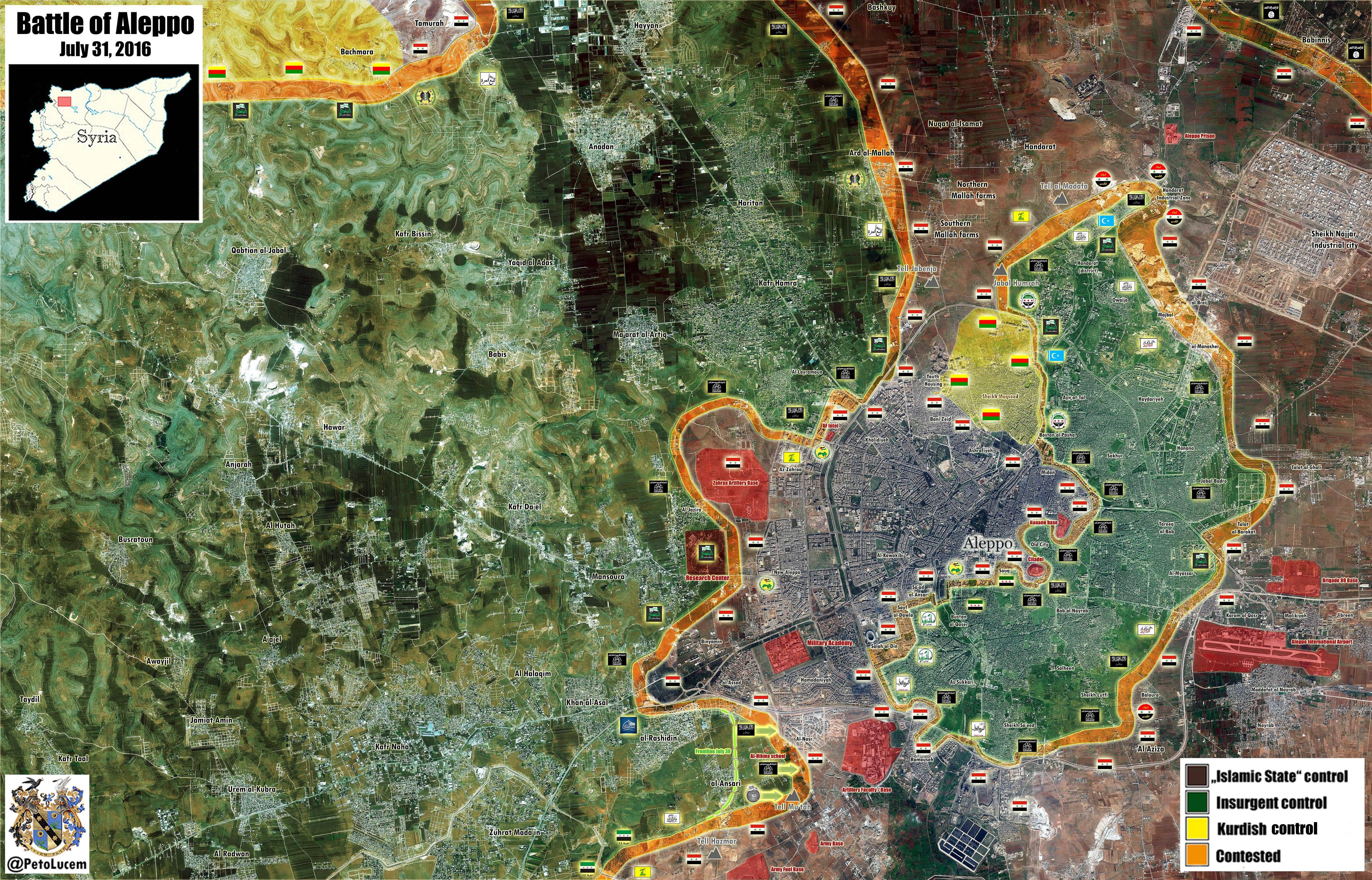 Russia get the fucking white swans out and carpet bomb that fucking small bulge full of islamist in rolling carpet bombing attacks.Time to get the father of all bombs out.Napalm and everything.Mine the whole area by artillery and air assets.What the fuck are you waiting for ?

I’d rather see some Su-25s to be honest, they’re much more accurate, and perfect for the danger-close situation. Otherwise you’d run a risk of hitting allied forces. A Buratino or two should also be able to do some good there.

Have you seen lately how many low flying aircraft have been blown outta the sky by MANPADS? Su-25 wouldn’t last a few minutes in that airspace. If they sent 10 Su-25 into that region they would lose 10 aircraft. At least not until the Su-25M3 is in active service.

Well we can thank the Saudis for that then. When is the M3 coming into service? I thought they were already equipped with IR jammers.

You are probably right though, apparently a Russian helicopter was already downed in the Aleppo battle of today.

The helicopter was downed in Idlib not Aleppo.

I agree that Russia needs to stop playing kids games with the jihadists by dropping these tiny -250kg bombs and start strapping their Tu-22m’s and Su-34’s with 1 ton bombs for an increased psychological effect on these insects. The terrorists in other provinces must be able to see their buddies vapourized in airstrikes. I mean you have an arsenal that includes the worlds largest non-nuclear blast and you exclusively using tiny little old dumb bombs? Just doesn’t make sense in a situation where all progress into liberating Aleppo could be reversed by recent insect gains. If the geniuses in the Kremlin just implemented a Total War – Scorched Earth policy then the rat lines running into Syria would dry up quickly.

The foolish Russian government is more concerned with the “public opinion” of idiots in the West and with the controlled Western mainstream media raising a propaganda outcry that Russia is “bombing civilians in Aleppo”, than a smashing and quick victory which would spare the lives of Syrian soldiers, Syrian civilians, and Russian servicemen alike. This is one of the main reasons, probably even THE main reason, that they suddenly stopped the very successful offensive for the sake of “truce” talks back in February, too.

I so don’t get russia’s geo political strategy!

I think The longer russia waits and drags along to wipe out these insects the harder it will be for them to manage after november when hillary becomes president.

I don´t understand why the Russians just don´t use thermobaric bombs on the jihadis. Proceed to film the outcome extensively and post on jihadi websites.

Carpet bombing is necessary. All “civilians” who are still there are jihady supporters, all real civilians fled Aleppo long time ago.