The fighting between the Ukrainian Armed Forces and the People’s Militia of the Luhansk People’s Republic (LPR) is ongoing in the area to the north of Debaltsevo. 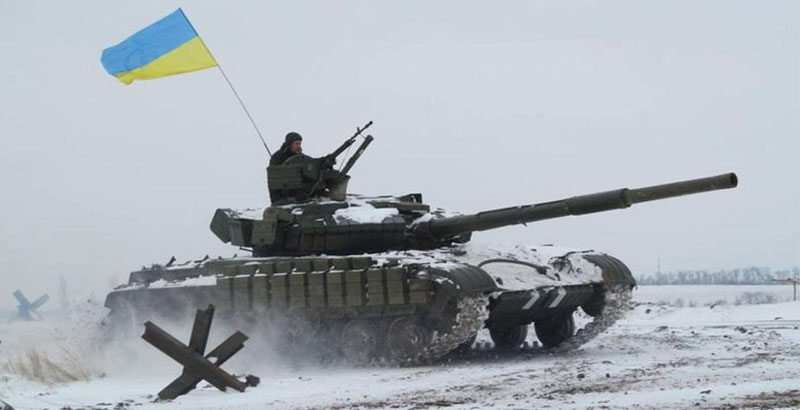 The fighting, which started to the north of Debaltsevo on December 18, is still ongoing. According to representatives of the People’s Militia of the Luhansk People’s Republic (LPR), Ukrainian troops continued to shell positions of the People’s Militia near the village of Kalinovka in the afternoon and evening of December 20. About 21:00 pm local time, the shelling significantly intensified, but there were no attempts to break through. The whole evening, until the night, there were firefights with usage of mortars, artillery and small arms.

The situation with attacks of the Ukrainian Armed Forces on the areas, located to the north of Debaltsevo, during December 18-20, is becoming a bit clearer. At the moment, it is known that the both sides suffered heavy losses, though their numbers are very different, according to various sources. In addition, the republic’s units had to step back a little.

On December 18, units of the 54th Brigade of the Ukrainian Armed Forces, supported by artillery and armored vehicles, attacked positions of the LPR People’s Militia, located in 1.5 km to the north of Kalinovka village, on the outskirts of the so-called Enchanted Forest and neighboring heights of the village. The main strike targeted positions of the 3rd Battalion of the 7th Brigade of the 2nd Army Corps of the Republican forces. At the beginning, Ukrainian troops opened fire with automatic weapons of infantry combat vehicles, and then started to use mortars and artillery.

The situation was complicated by the fact that a few hours before the attack all the heavy military hardware (tanks, infantry fighting vehicles) of the 7th Brigade was diverted to training area, located in a few tens of kilometers away, in order to carry out military exercises. Soldiers of the 3rd Battalion met the enemy only with automatic weapons, machine guns and a limited amount of ammunition.

Alexander Tatarin, a soldier of the LPR People’s Militia, who was wounded on the first day, told the Luhansk Information Center (LIC) that nationalists and mercenaries were in the ranks of the attackers, who did not manage to advance.

“At first, [Ukrainian] infantry combat vehicles operated against us, and then our positions were shelled with artillery and mortars. They aimed to take our positions, to take our heights in order to advance further. Since their main purpose is to come here – in Debaltsevo and Uglegorsk. [We] did not expect [a daring attack], but were prepared… The only thing, of course, it was very difficult, as we had only automatic weapons and machine guns,” Tatarin noted.

The soldier also said that Kiev’s fighters, who attacked the position of his unit, were totally ‘variegated’.

“There were various ragtag, including nationalists, mercenaries, completely various citizens,” he added.

The wounded soldier just may be ignorant or just does not tell that some LPR positions had to be left. It is known that Ukrainian troops managed to kick soldiers of the 3rd Battalion out from the Enchanted Forest and their positions on the heights of Kikimora, Krest and Zvezda. The information about the lost positions was confirmed by Igor Strelkov in an interview on the Komsomolskaya Pravda radio.

The Ukrainian side also confirmed its heavy losses in the area to the north of Debaltsevo. The headquarters of the Anti-Terrorist Operation Zone (ATO) reported about 6 killed soldiers. At the same time, according to representatives of the republican forces, no less than 10 Ukrainian fighters were killed, while they were trying to break through. The Kharkov Today news portal published an interview with a serviceman of the Ukrainian Armed Forces, who has a call sign ‘Nyama’. According to Nyama, 25 fighters of the 54th Brigade were killed, while 35 others were wounded during the battles near Debaltsevo. The losses of the LPR side are also serious. It is known about more than two dozen wounded soldiers. It is possible that there also are killed soldiers, but this information is closed.

Currently, the situation in the area to the north of Debaltsevo is changing. On December 20, a motorized artillery battalion of the 7th mechanized brigade returned from the landfill. The Ukrainian ATO headquarters complained of strikes with 122-mm artillery from positions of the ‘Russian-occupation forces’. In the afternoon, as a result of a counterattack of LPR troops, the Kikimora height was recaptured.

Not sure about the soldiers but aparently all the observers have died since nobody mentions any sanctions against Ukraine.

hhabana
Reply to  The Eye

Exactly. What a farce! The militias should advance with Russian supplies and screw Europe. Merkel and her mentally ill criminals are continuing their assaults on Russia. I applaud Geert Wilders and those fighting The Establishment. The European Establishment are lost in their Muslim hospitality charades. The European people are having a difficult time waking up as they are under constant brainwashing by their media. I can attest to this as I have relatives in Western Europe and I just shake my head when I hear their talk about showing how they are “higher” than the countries where the Muslim savage comes from. As they reaped they are sowing! In the future there will be armed conflict and the Muslims will be escorted back to their countries the way they were in the past-with sword, spear and gun at their backs.

Looks like the Ukros should change frrom Opiate laced MREs to Cocaine !! Where is the DEA when they need it ??