This morning the Syrian Arab Army (SAA) and its allies have recaptured more points from Hayat Tahrir al-Sham (formerly Jabhat al-Nusra, the Syrian branch of al-Qaeda) and its allies in northern Hama, restoring control over the al-Sheha hill south of Arzah and the strategic “point 50” north of Qumhana town.

Reports appeared that the SAA and the National Defense Forces (NDF) were able to capture many fighters from the US-backed Jaish al-Izzah and Hayat Tahrir al-Sham (HTS) in the al-Sammam hill after recapturing it.

It looks that the SAA had finished reorganizing its forces in Hama and the SAA counter-attack on Khattab would take place soon. This will put an end to the HTS-led advance in the Hama countryside. 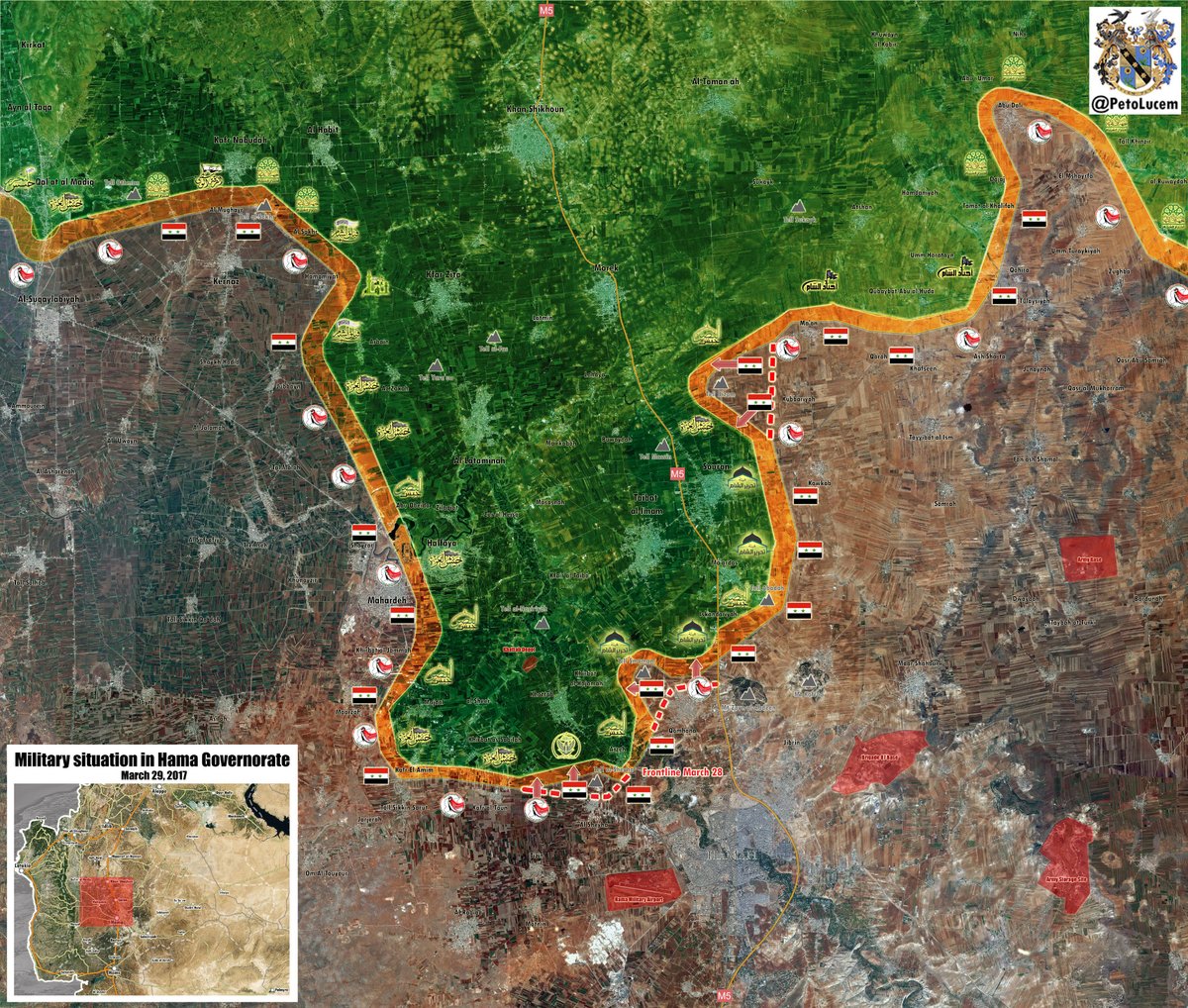 According to reports from the Hezbollah media wing in Syria and the Russian Ministry of Defense, over 10.000 members of HTS and allied groups are engaged in the ongoing offensive in northern Hama. About 2000 of them were killed in clashes according to the Russian Defense Ministryl.

Militants also downed a drone belonging to the SAA over Sheyha: 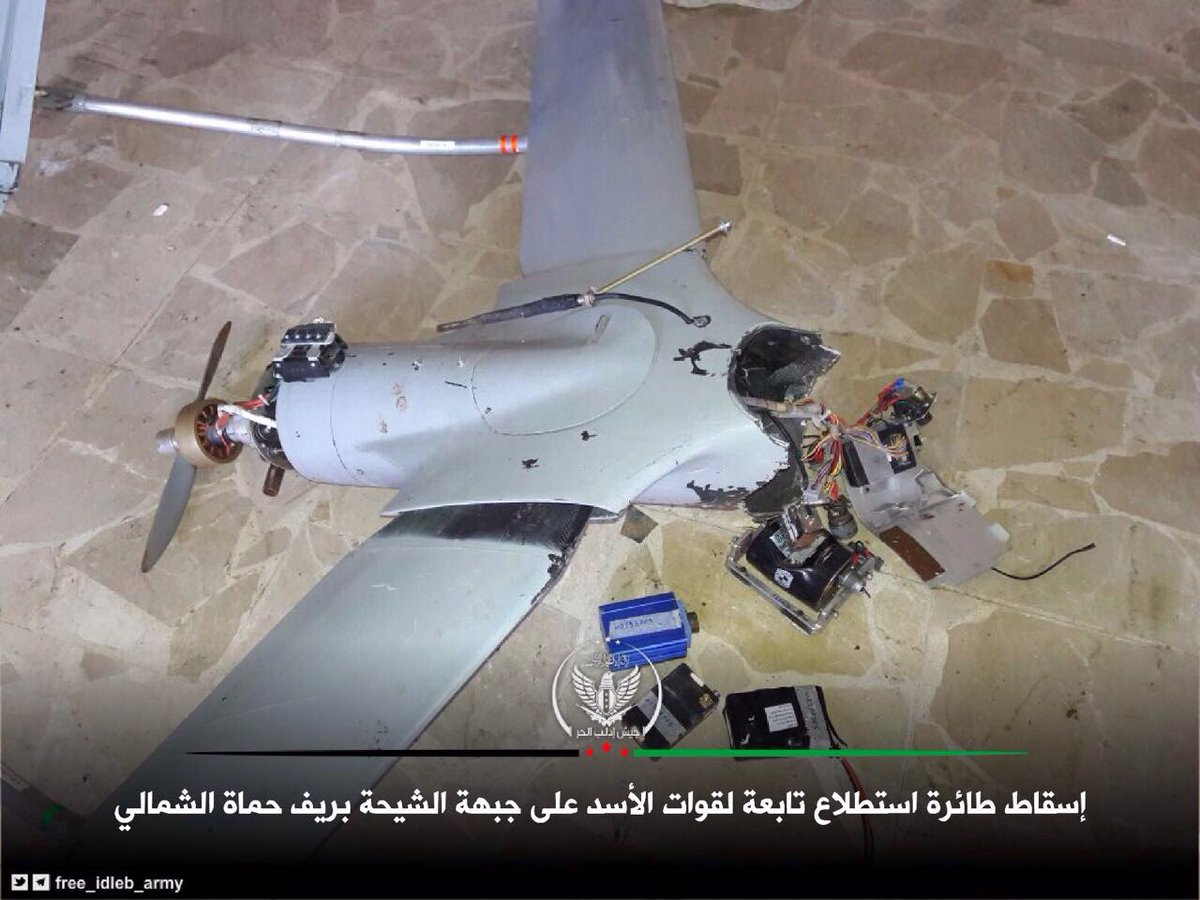 The SAA destroyed 11 tanks,15 BMPs and over 100 vehicles armed with guns since the beginning of the HTS-led attack. Russian and Syrian warplanes destroyed 12 ammo depots, 17 artillery pieces and 6 rocket launchers belonging to HTS-led forces during the last week .

Repel this offensive, then do heavy offensive on pockets. Clear all in the south you can. Deir Hafer and Palmyra must be linked also. This is maybe simplest due to no-much ISIS manpower in the west

if they dont do anything about it idlib i think it will just become a bigger and bigger problem for SAA, they need to conquer and hold it once and for all

Likely the SAA would need assistance from the SDF out of Afrin to clear the northern part of Idlib and to seal the border with Turkey. Assad would, just as in regard to DeirezZor, have to offer something substantial to the SDF for them to get involved.

SDF is partly kurdish, indeed. SDF is very pragmatic however and will never attack Turkey without an urgent AND pragmatic reason as they are too vulnarable towards Turkish retaliations.

They have their hands full with both the march on Raqqah and have defensive positions everywhere in case of IS counterattacks anywhere or a turkish incursion along the very long border.

With the build up of the HXP, the conscript army, and the rapid expansion of the YPG and YPJ, SDF aims to free up a lot of mobile military capacity, which can be used both during and after Raqqah.

The arab SDF partner Jaysh al Thuwwar originates partly out of Idlib and has been urging an attack on Idlib.

SDF will, to participate in an attack on Idlib, require from Russia guaranteed airsupport, heavy arms, support in case of a Turkish attack on Afrin and from Assad free passage between Kobane and Afrin, incl. for military forces, political moves toward a federal system. The same goes for SDF moves on DeirezZor, although there the US would have a say too.

This terrorist offensive from Idlib to Hama is great opportunity for the SAA and Russia. Hopefully almost all the terrorists from Idlib will be thrown into it. They are out in the open in this offensive or in villages that have been evacuated by the SAA. Now Russia can use its new super conventional bomb see video to wipe the terrorist out in mass while they are out in the open. Then Idlib will be wide open for the SAA to recapture quickly https://www.youtube.com/watch?v=12-1ZKXAbbg http://www.reuters.com/article/us-russia-bomb-idUSL1155952320070912 Russia tests superstrength bomb, military says This new ordnance, claimed by the Russian military the world’s most powerful non-nuclear bomb, explodes in a giant fireball during a test in this undated television image shown by Russian Channel One television, September 11, 2007. Russia has tested world’s most powerful vacuum… REUTERS/Reuters TV By Dmitry Solovyov | MOSCOW Russia has tested the world’s most powerful vacuum bomb, which unleashes a destructive shockwave with the power of a nuclear blast, the military said on Tuesday, dubbing it the “father of all bombs”.

The bomb is the latest in a series of new Russian weapons and policy moves as President Vladimir Putin tries to reassert Moscow’s role on the international stage. “Test results of the new airborne weapon have shown that its efficiency and power is commensurate with a nuclear weapon,” Alexander Rukshin, Russian deputy armed forces chief of staff, told Russia’s state ORT First Channel television. The same report was later shown on the state-sponsored Vesti channel. “You will now see it in action, the bomb which has no match in the world is being tested at a military site.” It showed a Tupolev Tu-160 strategic bomber dropping the bomb over a testing ground. A large explosion followed. Pictures showed what looked like a flattened multi-storey block of flats surrounded by scorched soil and boulders. “The soil looks like a lunar landscape,” the report said. “The defense ministry stresses this military invention does not contradict a single international treaty. Russia is not unleashing a new arms race.” Such devices generally detonate in two stages. First a small blast disperses a main load of explosive material into a cloud, which then either cpontaneously ignites in air or is set off by a second charge. This explosion generates a pressure wave that reaches much further than that from a conventional explosive. The consumption of gases in the blast also generates a partial vacuum that can compound damage and injuries caused by the explosion itself. “The main destruction is inflicted by an ultrasonic shockwave and an incredibly high temperature,” the reports said. “All that is alive merely evaporates.” Rukshin said: “At the same time, I want to stress that the action of this weapon does not contaminate the environment, in contrast to a nuclear one.” “FATHER OF ALL BOMBS” The Tu-160 supersonic bomber that dropped the bomb, widely known under its NATO nickname of “Blackjack”, is the heaviest combat aircraft ever built. Putin, who has overseen the roll-out of new tactical and anti-aircraft missiles and combat aircraft, has ordered “Blackjacks” and the Tu-95 “Bear” bombers to patrol around the world. The report said the new bomb was much stronger than the U.S.-built Massive Ordnance Air Blast bomb — MOAB, also known under its name “Mother of All Bombs”. “So, Russian designers called the new weapon ‘Father of All Bombs’,” it said. Showing the orange-painted U.S. prototype, the report said the Russian bomb was four times more powerful — 44 metric tons of TNT equivalent — and the temperature at the epicenter of its blast was two times higher. In 1999 Russian generals threatened to use vacuum bombs to wipe out rebels from the mountains during the “anti-terrorist operation” in its restive Chechnya province. New York-based Human Rights Watch then appealed to Putin to refrain from using fuel-air explosives. It remains unclear if weapons of this type were used during the Chechen war. U.S. forces have used a “thermobaric” bomb, which works on similar principles, in their campaign against al Qaeda and Taliban forces in the mountains of eastern Afghanistan. “It (the bomb) will allow us to safeguard our state’s security and fight international terrorism in any circumstances and in any part of the world,” Rukshin said.