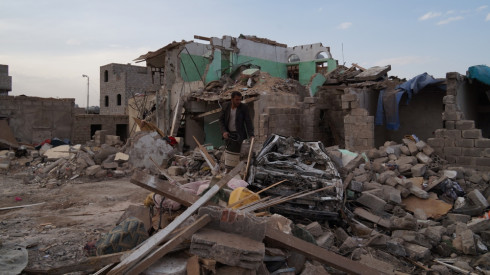 Planes of the Saudi Air Forces carried out a series of airstrikes in the capital city of Sana’a after dozens of raids in what was described as the fiercest attacks since the beginning of the Arab offensive nine months ago.

Al-Nahdin and Tabet Zahban neighborhoods were heavily affected in these last attacks.

Warazan and Al- Mukha districts in Ta’izz were also bombed by Saudi airstrikes. An indeterminate number of civilians resulted death or wounded.

The World Health Organization (WHO) has been continuously calling for access to the zone, but continuous Saudi airstrikes and pro-Riyadh forces’ shelling have thwarted the mission in several occasions. It’s been reported that five trucks carrying humanitarian aid and health supplies that needed to be urgently delivered in Ta’izz have been prevented from entering to the zone since mid-December 2015.

WHO also informed that situation in hospitals in the same area is truly critic, since many services have been indefinitely suspended besides the overcrowding of wounded patients.

Over 250 000 citizens of Ta’izz are living in a “virtual” siege since November, that’s why the international organization is calling for the secure movement and delivery of humanitarian and medical supplies in the zone with the cooperation of all the parties involved in the armed conflict.

Arab intervention in the conflict started on March 26, 2015 under allegations of trying to restore the government of Hadi and fight against the raising of the Houthi Ansarullah movement.

Until now, Yemeni conflict has left about 7 500 civilian casualties and more than 14 000 injured since the beginning of the airstrikes in March of the last year.

Saudi forces and their mercenaries are being fought by Popular Committees and the Yemeni Army.

A vote for trump is a vote for Saudi Arabia…and usury !