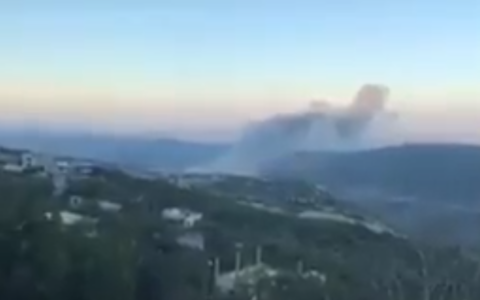 A screen capture from a video purporting to show the aftermath of an Israeli strike on a research facility in the Masyaf area of northwest Syria on July 22, 2018. (Screen capture: Twitter)

Aziz Asbar, the head of the Syrian Scientific Studies and Research Center (SSRC), died after an IED had hit his car in the village of Masyaf in the western part of Hama province.

According to reports, the incident took place overnight on August 5 and Asbar’s driver was also killed in the attack.

Multiple pro-government sources and media have already linked the August 5 incident with activity of Israeli special services in Syria. However, no evidence has been provided to confirm these claims.

The SSRC is a Syrian government research agency, which is according to the US-Israeli-led bloc is actively involved in the development of missile and even chemical weapons.

The Damascus government has been strictly rejecting accusations of stocking, developing or using chemical weapons since it employed its agreement with the Organisation for the Prohibition of Chemical Weapons aimed at destroying Damascus’ chemical weapons stockpile.

It’s interesting to note that besides the SSRC, there are a few other military-linked research and development bodies in Masyaf. On July 22, Arab media reported that one of these targets were attacked by the Israeli Air Force.

Determined with a zeal only a zionist can fully embrace, the Mossad sends in a hit team to target and take out key Syrian Govt Officials to then be blamed on her duly Elected President.

Hey are you stealing my name? ? https://youtu.be/ckVYO9oI8vc

The only kleptos around here are you and your talmudic terrorist tribe.

And that’s not German.This is German… and kind of a Ramstein rip-off, but who am I to judge Eisbrecher? I’m just watching it for the Peanutgirly.

USA,UK,France and Israel have lost the syrian war!…they could not do anything to save their terrorist beyond failure attacks and some murders….No pipelines through Syria means that Iran is still the door of Ormuz…

This is really a hard time for his family. Dr. Aziz Asbar was a genius scientist. He was working to defend his land and his nation from war criminals US, NATO and Israel. I condemn this cowerd attack on Dr. Aziz Asbar. He is a martyred. I pray to God to forgive his all sins and lead his soul to heaven and give comfort to his loved ones. God free Syria and Palestine from these war criminals that attacks on these scientists, defences and economy of Syria and Palestine. Ameen.

Killing the head developer would hardly affect the development of new techs as the researches involved with each individual project are more important. To really cripple some contry technology development you must do just like US commandos made in Brazil’s Alcantara Rocket Base, they blew up the rocket when the entire development team was assembling it for the test launch, thus killing all our greatest rocket scientists in one single blow.

Why to kill scientist because he wants to defend his country from some stupid war criminals. Both US and Israel are murderers and occupiers. One have occupied America and the other Palestine. They have destroyed the peace of our world. God have not created our world for US and Israel to make it human slaughter house. Diagnose the DNA of the criminals of US and Israel then you will find that why they are so war criminals.

These Jews are trouble wherever they go. We good people of the world need to start standing with our brothers in Hezbollah and the Islamic Brotherhood and strike back at their tendrils in our own countries.

Time to go after the head of the snake,an eye for an eye,etc.Lieberman would be a very nice exchange for this Luciferian zionist murder.

Even if Muslims faithful to tradition (ISIS) are reduced to a handful they are the ones who are the true followers of the Prophet. It is necessary an awaken, an awaken from the lethargy that has numb our faith and consequently the understanding of the truth. Fight against the enemies of truth, against the enemies of religion, against sin, against secularism, against modernism, against falsehood, against hypocrisy. Arm yourself with the weapons of truth and fight the good fight, not tomorrow, brothers and sisters, but today. The true faith (Islam) encourage you to annihilate the sleep imposed by modern governments and exhort you to live as true Muslims. Because there is no faith without fighting. – Berlin Mosque, 23rd Dhul Qadah, 1439h

I am glad you said that.

A Bit of a Bot

If Syria use just 30 Zulfiqar missiles to destroy the Israel all important targets then Israel finished. ISIS and Israel both are US creation and their elimination is important for ending bloodshed in Middle East.

Syria has produced thousands of three types of ballistic missiles Tashrin-1, Fateh and Zufiqar. Tashrin missile is a copy of Scud-C and D while Zulfiqar missile is a copy of Chinis M-11 missile or Pakistani Shahine-1 because its size and operational range is similar to Shaheen-1 that is 750 km. It is a hypersonic missile which achieve the speed of Mach 6.5 with in few seconds needed for complete destruction of targets. It carries single warhead of 750 kg or multiple warheads of 150 kg of HE. Israel cannot intercept this missile due to hypersonic speed.

I was completely unaware of this. Thanks Rob. If Syria has control of this type of missile, it means everywhere inside Israel is capable of being struck,whether in Tel Aviv or in Jerusalem. That is a complete game-changer!

I do agree with you, but I also believe due to Israel’s air defence systems – the attack needs to come from Syria, Iran, Russia and China – all at once.

I will add that Jerusalem must not be touched.

Zulfiqar is an Iranian ballistic missile, I never read anywhere that Syria has ever produced even one of them.

My opinion is that you are singing a zionist tune.

Israel begs for fight with Syria. Then this will happen to Israel.

i’ve seen some idiots but this guy stands out.

in any case i don’t like the hyperbole as the people he tries to beat seem a bunch of faggots to me.

And at any rate, the Zulfiqar remains an Iranian system that has never been produced in Syria.

He was drunk like US and Israel. He was not in full conscious.

They have more powerful thing than these missiles. That is petrol. US, NATO and Israel use their petrol in own war planes, tanks, trucks and in missiles and then attack on them. These nations does not know the value of petrol. Thousands of products are made of petrol.

Time to return the favor.