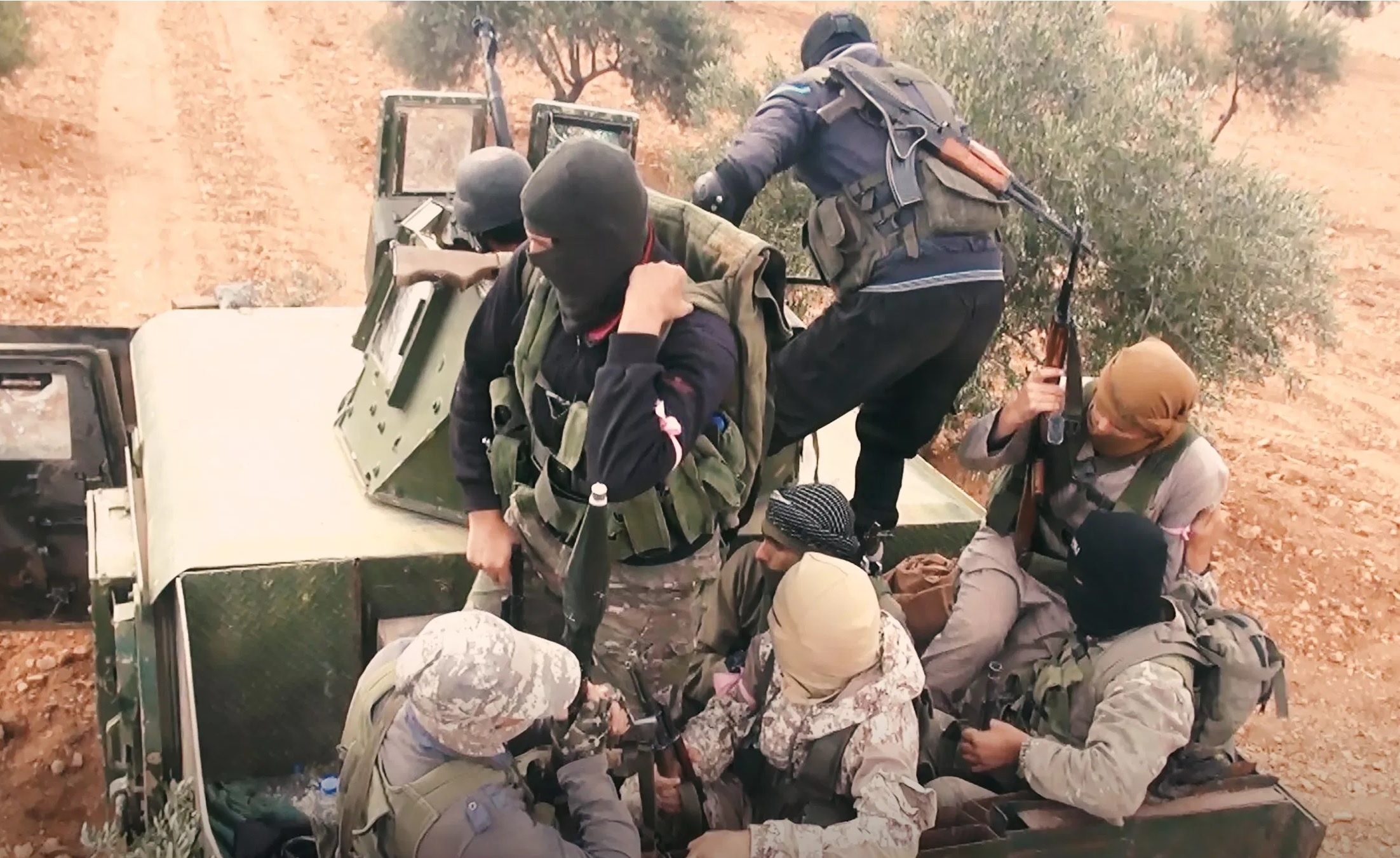 More than 15 soldiers and officers of the Syrian Arab Army (SAA) were killed in a terrorist attack on their position west of the city of Aleppo, a military source told SouthFront.

According to the source, many other Syrian service members went missing after the attack, that occurred in the early hours of April 20. The terrorists used blankets made from special materials to hide from the SAA’s thermal surveillance systems while they were approaching their target.

Hay’at Tahrir al-Sham (HTS) claimed responsibility for the attack immediately. Abu Khalid al-Sham, a spokesman for the group’s military wing, told an affiliated news network that only four fighters of HTS’ special forces were killed in the attack.

“Today’s morning, several groups of the Mujahedeen sneaked towards positions of the regime’s militias in the area of Suq al-Jabas in the eastern Aleppo countryside … The Mujahedeen took the personnel of the Nusayriyyah army [HTS’s term for the SAA] by surprise and clashed with them killing and inuring most of them,” al-Shami said.

The attack coincided with another in the northern Lattakia countryside. Pro-government sources acknowledged that at least 5 Syrian soldiers were killed there.

The SAA usually responds to such attacks within a few hours. However, limited military responses failed to deter Idlib terrorists in the past.

Russian and Syrian forces must launch an offensive against these terrorists that obviously have Western support.

You can call me Al
Reply to  Rodney Dezarn

Yes immediately; this is depressing news to us reading it, the troops on the ground must be demoralised; if that feeling gets worse – the war is lost.

F00k the fake diplomatic pow-wows and get on with the fight.

This is what happens when an army is on the move and then you stop them and not only that but replace all the veterans with green horns that may have seen war as victims but fight no battles and won none. For that you can thank the russian policies in syria they imposed on them.

I dont have a stake in syria to be emotional about it my friend. the only reason I have an interest, is learning from the mistakes of others, as well new ways in asymmetrical warfare.

You are quit an optimist!

TAF-ING dirty eşeks
Reply to  You can call me Al

Iran has no oil left inside syria and is being sanctioned to death literally, iranian oil tanker went through suez canal to Turkey, this is how bad irans policy is.

you are zionist shit kurd

I dont post often just read hunting down hasbaras and you stink in all your posts.

You can call me Al
Reply to  TAF-ING dirty eşeks

No, no, dont do that; he is a nobody and not worth your attention.

no syria has no oil as is been stolen by the americans using their ziotools the kurds. As well the russians stop them, I wonder with what blackmail, to reclaim most of their land back.

is a very good article about that in global research, maybe you should read it and get a bit educated, so you sound a little intelligent and informed, rather a complete brainless ziotool.

You can call me Al
Reply to  TAF-ING dirty eşeks

Funny isn’t it, wherever they hide, their fucking hooked noses stick-out !.

if the russians stop selling short the syrians who allegedly went to help, then maybe SAA would not have released all its veterans from the army something the russians arranged and would not have send all the terrorist’s that so many 10s of thousand syrians die to defeat a free pass in the land they agree with the turks to get in order the turks to allow russia to build her gas pipe via turkey.

before you think negative, I suggest you read this article that maybe make you think closer to what reality on the ground is rather what all at one point especially me wanted to believe about why russia did what they did. But the facts to any one whose an analyst is to hard to overlook and not correct its thinking. Living in denial of fact it is not healthy. If you followed my posts you know I am pro russian and spend many years in russia as well have family ties there and a lot of friends, that are very patriotic people, who have fight and some of them still fighting in syria, but then is not the people we speaking about here but their governments so dont take me wrong.

this is a small sample of what the russian politicians done and are doing to syria and not only with the SA but also with the turks, meaning all the ones who destroy syria russians are kissing their asses for politics and national interest. There is no long planning with politicians just the same shit with different name, just a matter of time to show their real faces, to my opinion. but hey I maybe wrong.

disgusting under all aspects.

been an idiot and in denial of fact must be your main point. Either you blind to what is been happening and happens or you too brainwashed to see reality. Is your single cell stop functioning?

“I am no longer pro russian”

tool…… you are either a very stupid person or you translate what I said in your single cell as you see it fit. I have supported the move of the russians when they went into syria and believed that they was honest in what they been doing. I stop supporting the russians policies in ME when they clearly make 180 turn.

Now kindly go fuck your self.

“Now kindly go fuck your self”

better than fucking anything even remotely rensembling your kind, that of clowns who started as “pro-Russian” and then tried to sway people’s opinions to “anti-Russian” by gradually writing bullshit based on ZIONIST assumptions and diktats.

You give me the fucking vomit, i hope someone cuts your brake cables or something.

On the other hand single cells as your self obviously have not a critical mind so where they lead you follow.

” I always been positive with russians but that does not mean when their government say one thing and does another I must remain positive with them.”

I suggest you to go find someone else to bugger.

I know shit, and I know humans.

“…I may be wrong” I have not found you wrong yet. Always appreciate you taking the time and pointing out things that are not yet obvious to some people.

thank you, not all appreciate the truth because of their need to belong somewhere been followers in search of a leader, who take responsibility since they are not able to be responsible for themselves and actions.

Not only western only but Erdogan at large.

Forget it, Russia will not allow Syria to lunch an offensive on Idlib, Al-Tanf, and northeast Euphrates river because the partition of Syria has been established, 45% of original Syria land will be now the new Syria country. The commercial and economical ties Russia-Turkey are much more important than Syria full land recovery. Russia hope to convince Turkey to join Russia-Iran-China club. However Turkey is a selected NATO member, and from my point of view, it will continue being a member and the supposed miss agreement between USA-Turkey, NATO-Turkey is just theater with the finality of having Russia stacked and without the possibility of having full action on Syria, and in the near future with Iran.

That is just insane. At this speed saa will be lacking of man power in a year or two.

The SAA usually responds to such attacks within a few hours. However, limited military responses failed to deter Idlib terrorists in the past.

That’s because obviously the SAA retaliatory strikes aren’t really causing any damage to Al Nusra and Friends. Most likely they are pounding empty sand instead while the rats have gone underground. Because if the SAA reports are to be believed every retaliatory strike causes MASSIVE DAMAGE to Al Nusra & Friends. So much so that Idlib has to be some Verdun like wasteland. And yet they keep on coming. Either Al Nusra & Friends can easily replenish their losses or……. SAA retaliatory efficiency is highly overrated. I want the headchoppers to be pounded hard, but I suspect SAA efficiency leaves much to be desired about.

i cannot wait for the day SAA absolutely PUNISHES THESE SCUM!!!!!!

south front is the mouthpiece of terrorists.

To defeat terrorist..troops have to advance and conquer land!..otherwise in a defensive strategic SAA will lose!..

There is not question who has resulted with great benefits of the Russia-Turkey agreement, any doubt ?

Attacks on Regime have recently skyrocketed. There are reports of attacks from every Rebel Group plus isis.

There are also reports of food and fuel shortages. protests unrest rebellions seiges and road blocks in Regime areas.

Anti zionism and assadism are now clearly mainstream but wait until Turkey Taliban HTS and then finally AlQaeda become mainstream.

And Im saying this because I was supporting Iran Russia Turkey and even Syria before zoomers got their twitter accounts.

Russia is fully waiting for Erdogan to implement Astana agreement shit.Erdogan must arm HTS and integrate HTS=ALQAIDA in sabotaging FSA=ISIS,Then Astana talks is finished as the terrorist will prevent SAA troops.Erdogan will start building Pipeline through Syria with out hinder.S-400 will take down only Syrian jets.Erdogan will chase all Kurds in Iraq because their hindering Erdogan plans.If Astana talks fails no S-400 deal.

Idlib Terrorists is Erdogan army to keep on steal Syrian oil and gas.