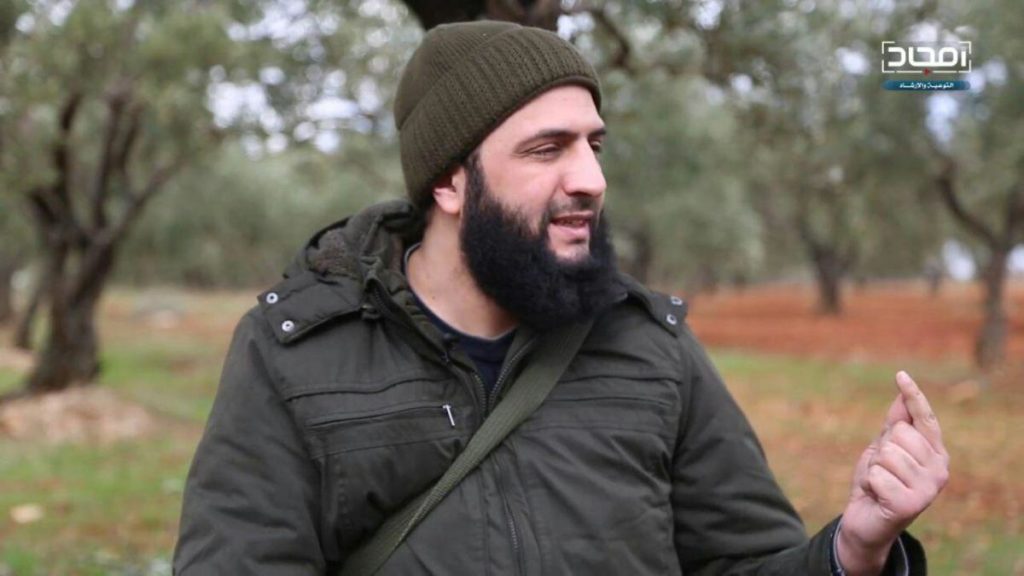 Hayat Tahrir al-Sham leader Abu Muhammad Al-Joulani received injures and was evacuated to a hospital in the city of Antakya in the Turkish province of Hatay, Russia’s RIA Novosti reported on February 19 citing a Turkish medical source.

According to the report, Al-Joulani received a shell fragment wound as a result of the explosion, which hit Idlib on February 18. The terrorist group’s leader is reportedly in coma.

Hayat Tahrir al-Sham (formerly Jabhat al-Nusra, the Syrian branch of al-Qaeda) has not commented on these claims so far.

Hayat Tahrir al-Sham is the most influential “opposition group” within the Idlib de-escalation zone. It controls about 80% of the area despite the fact that it’s formally excluded from the ceasefire regime. However, the military option has not been employed towards it so far because this would mean the full elimination of the so-called “opposition” in the area. Ankara is fiercely opposing to this development.

Yes Erdo you make sure Al-Qaeda to survive, yes Erdo you will make HTS same as Hezbollah in Lebanon you will integrate them as a political wing in Damascus government you nasty Osman. Take them into your country into your party and give them rights in Turkey. LOL a known most wanted al-qaeda boss fugitive is now resting as a kind in Turkish hospital, I bet he is surrounded with tons of security to protect him. LMAO, What a world.

Putins best friend Erdogan is harboring terrorists are giving treatment instead of arrest the headchopper. Just as Putins western colleagues and partners who evacuated terrorists around.SDF wants its zone of self rule in Syria.Akqaida=HTS wants their area of self rule.Exclude Erdogan and Trump out of Syrian internal affairs.

if i were SAA high command , i´d take 100 russian soldiers prisoner…..give them a 24 hours notice.. either attack TAF and HTS or we will publicly Skin and burn the russians.

The Agenda A one world government, with jeruslame as ist capital under satanic jewish Leadership. ALL nations that recognize the illegal satanic evil Entity named Israel are part of the Agenda. including USA,russia,uk,eu,china etc.,…..

wake the fuck up

you stupid magot Russia rule the Syria. ASSAD can do f*** alllll for the next 50 years just try to harm Russia then no more asssad?

Lets hope he stays in a coma :)

In the past, wounded civilians were taken to Turkish hospitals and came back dead and with their orans stolen – that’s probably why the HTS leader was taken there too …

On paper, Turkey has HTS on list of “terrorists”. But in practice they always were and still are their allies! Fuck Turkey and Al Qaeda and all other pro-zionist scum!

At least one person is not the least surprised that Erdogan is propping up HTS : Assad.

It’s not the #PashaErdogan who supports HTS don’t you know?? It’s his Wife :))) (also the reason why the #Pasha can’t talk to President Assad ….. apparently, or so the story goes, the lovely Mrs Assad “insulted” the Pasha’s wife at some point during a visit to Damascus some years ago)

I don’t understand what SAA and Russia are waiting for. Start the offensive, SAA divisions should start storming the Hama/Idlib frontline under intense Syrian Airforce/Russian Airforce airstrikes and naval support. Enough is enough, waiting is too long, eliminate HTS and FSA and liberate all of Idlib already.

Russian Airforce has done dozens of reconnaissance flights over Idlib and SAA have shelled al nusra positions hundreds of times. It’s time to start the aerial campaign and start crushing the jihadis from the sky. And put some Kalibrs to use against them as well.

Let’s hope he comes to! He should be fully conscious of his crimes.

His evacuation to Hospital in Turkey makes crystal clear who and what is supporting al Qaeda in Syria. I suspect the Leaders of Iran & Russia will be delighted to watch nErdo squirm at their next meeting and unless HTS has a Leadership Procedure in place (other than one takfiri killing another takfiri only to be knifed in the back by another takfiri …. and so on) I suspect the game is up for #PashaErdogan in Syria

I’d really love to know how he got from Idlib to Antakya? Which State provided the medi-vac chopper to take his across the Border with Turkey? Why did Turks allow him in?