Hayat Tahrir al-Sham (formerly Jabhat al-Nusra) and its allies established control over the villages of Sham al-Hawa, Umm al-Khalakhil, Kuhwayn al-Kabbir and some nearby points in southern Idlib after ISIS terrorists operating in the area had surrendered to their “moderate” counterparts.

Overnight on February 13, reports appeared that some 400 ISIS members operating in the area surrenderd to the “moderate opposition”. Later, the number decreased to 340, including 80 women and children. However, the existing photos do not allow to confirm any of these numbers. MORE DETAILS HERE

However, the fact that ISIS units had no more capabilities to fight because they had lost all of its equipment to the Syrian Army in the battle for the northeastern Hama pocket appeared to be true. Thus, Hayat Tahrir al-Sham used this situation to expand its countrol in the area.

If the collapse of the ISIS force in southern Idlib is confirmed, Hayat Tahrir al-Sham will likely make an attempt to launch some offensive operations against army positions in the area of Abu al-Duhur and south of it aiming to take back at least some of the areas, which had been recently captured by government forces. 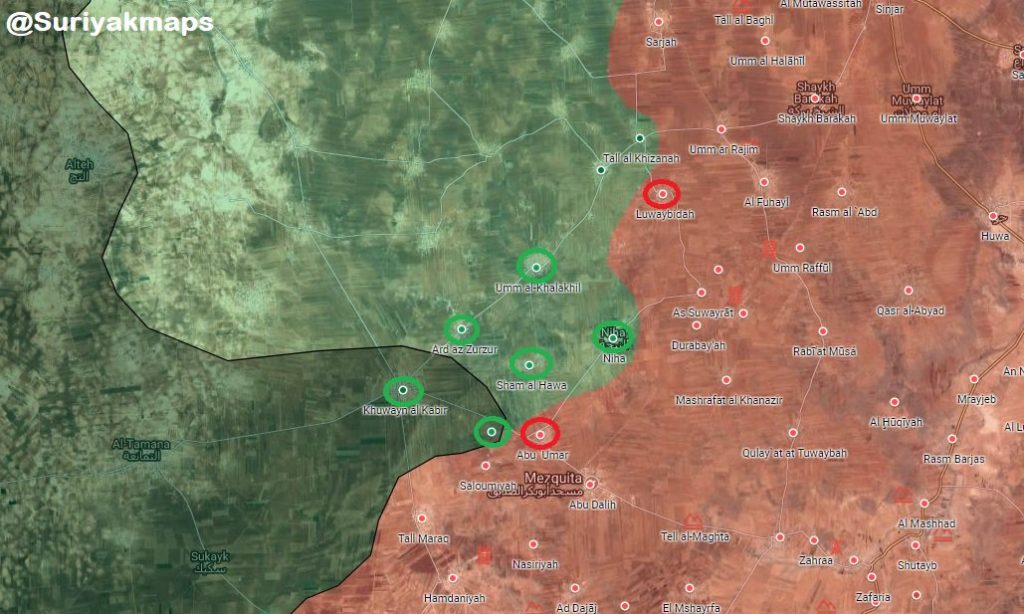 They surrender to the Kurds and HTS always. This is a farce.

I do not think they Kurdish Al Sham .

I believe he is referring to two different areas, Idlib (Nursra/HTS) and East of the Euphrates River occupied by YPG/SDF & joined ISIS groups. He refers to tactic employed for recruitment by both.

I cant see that, but agree its a strange mix and hope for more details.

You can call me Al
Reply to  EL ZORRO

Yeah, that’s about it, you can almost smell the fat Yank McDonalds hand in the facts.

Please Sign the letter to the world leaders and also share it. We demand for the release of Ahed Tamimi and all Palestinian children wrongly held in military prisons. The international community must put an end to the detention and ill-treatment of children in these prisons. Enough is enough.

But the parents put them out as targets.

I have stated that I have signed it twice now. I am in full agreement with you.

If its raining into Your nose too, you might consider a replacement.

this trick is getting old and borring to be honest.

Green Orcs will be having BBQed Grey Orcs for dinner! :D

Please Sign the letter to the world leaders and also share it. We demand the release of Ahed and all Palestinian children wrongly held in military prisons. The international community must put an end to the detention and ill-treatment of children in these prisons. Enough is enough.

Children shouldnt be put in the frontzones like that just because the birthrate is that high.

Just wait. Israelien behave more and more like arabs and perhaps You then can share the same kind of dark.

You mean they switched logos again, what a joke.

Israel have kidnapped a 16 year old Palestinian girl Ahed Tamimi and her parents by gunpoints. Nobody knows where they are now. Each year Israel kidnap thousands of adults and small kids from the streets.

Please Sign the letter to the world leaders and also share it. We demand for the release of Ahed Tamimi and all Palestinian children wrongly held in military prisons. The international community must put an end to the detention and ill-treatment of children in these prisons. Enough is enough.

Children have no business in the resistance. Sure id sign the petition but would she stop slapping soldiers which would lead to her arrest again? Protesters should stop with stones. It is a feeble attempt and is always used against them. Either the gun or the pen or diplomacy. Whoever threw those stones is either an infiltrator, stupid, or a resistance member with no hesitation to sacrifice another person. The front should never have to use kids.

If terrorist from other countries attack your homes and taking it from you then don’t complain and don’t resist.

Israel is a part of Palestinian land but it is occupied by gangsters the illegal European migrants.

The important is the changes of colors to the ground areas for the peace process to be further. Palmyra is a center where ISIS no longer remains but still is disputes of war since the warehouse is full of weapons for the syrian army used by zionists : so the ISIS zionists lay down the beast as the imperialism. God laugh…

Arrrrh, I knew it. Last time I counted, there was 231 million zionist in Syria.

Can Al Nusra really gain new territory when all they did was recover territory that they recently lost to ISIS?

Also I hope that Al Nusra launches another offensive, as that would give the SAA the casus belli to strike back and take back more of its country from these Turkish sock puppets.

ISIS surrender to HTS? Here, put these new uniforms on and pick your gun back up…..