On May 19, Hay’at Tahrir al-Sahm (HTS) executed four civilians – “Abd al-Aziz Ruduan”, “Hamdi Yazagi”, “Tha’ir Salam Alik” and “Hussam al-King” – in the center of the city of Idlib accusing them of being “spies” for the Syrian and Russian intelligence, the Syrian pro-opposition news outlet Enab Baladi reported.

According to Enab Baladi, four civilians were accused of carrying out assassinations and planning attacks in Idlib governorate upon orders from the Russian intelligence in Hmeimim airbase and the Syrian Military Intelligence.

HTS announced on May 10 that its security forces had captured three intelligence cells of the Syrian Military Intelligence and the Russian intelligence after tracking them for months. Back then, a security commander of HTS claimed that these cells had assassinated many fighters and commanders of HTS and the Free Syrian Army.

In the both cases, HTS didn’t present any evidences to support its claims. This led Syrian pro-government activists to believe that the radical group is fabricating these charges to get rid of its opponents.

These HTS bastards comply the commands and instructions of the US, UK and Israeli migrants.

Bastards? What is your definition of bastard? Being in Putins ass? At least there are at least some not brainwashed people like you. 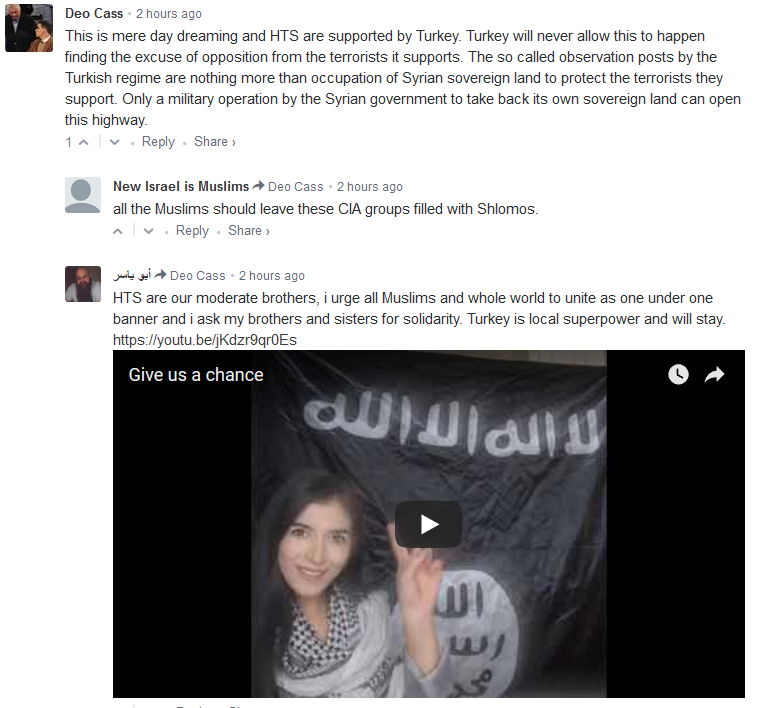 Israeli migrants, US, UK, KSA are the big security threats to the all countries in Africa and Asia as well as to Russia and China. They have held Palestinians, Yemenis, Libyans, Syrians and Afghanis hostage and oppressed and stealing their assets.

King Abdullah of Jordan can import oil and gas from Syria and Iraq. There is no problem and stop buying gas from Israel.

Those that have relations with US, UK, France and Israel are non Muslims and would be called traitors.

This was common among Fatah terrorists back in the day. It’s an easy excuse for settling personal quarrels to say they were collaborating with the enemy. Although, one or two of these guys might have actually been informants.

This is gift for you with German subtitles :)
https://youtu.be/h9d-NhgCT7k?t=50s

Heard it actually was for defying HTS by refusing to join them and why they were made examples just as the last one was, good recruitment poster for barbaric head choppers of the takfiri persuasion.