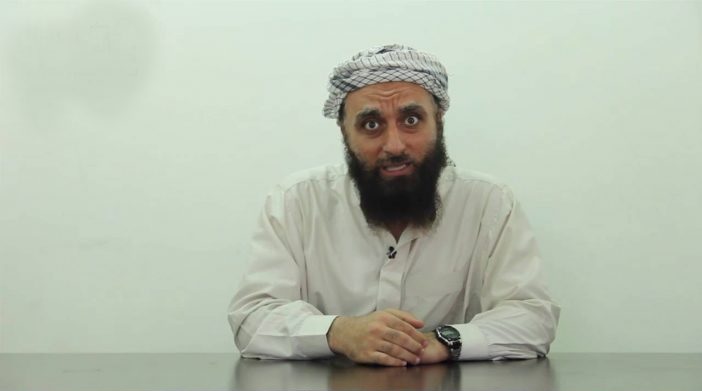 On August 15, Abu al-Fath al-Farghaly, a senior commander of Hay’at Tahrir al-Sham (HTS), warned Russia’s Foreign Minister, Sergey Lavrov, that the radical group will “cut the feet” of any soldier who attacks the northern governorate of Idlib.

“The Mujahedeen are in their strongest physical and moral status and their will won’t decline for a moment until the liberation of Damascus and beyond,” al-Farghaly said in an open letter to Lavrov, according to the HTS-linked news agency Iba’a.

A day earlier, Lavrov said during a joint news conference in Ankara with his Turkish counterpart, Mevlut Cavusoglu, that the Syrian Arab Army (SAA) has the right to defend itself against attacks in Idlib. The Russian foreign minister also noted that the de-escalation agreement in northern Syria don’t include terrorist groups.

Lavrov’s statement clearly triggered HTS’ leadership, who believed that the de-escalation agreement and Turkey will protect their remaining strongholds in northern Syria.

Many Syrian activists mocked al-Farghaly warning because HTS was badly defeated and its so called “Mujahedeen” run away in all the recent battles with the SAA. This warning is likely meant to calm down HTS-supporters in northern Syria who are panicking over the upcoming attack of the SAA.

Ha ha ha ha. Guess who will be cut off at the knees.

”The Mujahedeen are in their strongest physical and moral status ….. ” so fucking LOOOOOOOOl u bitches , ran away and agreed for evacuation because u knew it was only way to live another day or two. Now u know u have just 2 options – DIE or RUN to turkye to save your ass .

They pretty physically fit after all that running away ?

not wives, but virgins…. there is a difference.

The wives are all nightmares and the virgins are future nightmares :)

I am becoming a monk in my old-age!

Me too :) Not the order that are ‘kiddy fiddlers ‘ though.

Absolutely not! More like the New Order of West Ham that has to suffer relegation fears every season. Enough to make anyone unfit for any other human activities.

I have increased it to 80 McCain clones, to compensate for inflation and his ugliness!

time for the dirt to be cleansed once and for all. Next stop I hope is the turks leaving afrin and hand it over to the ones it belongs to.

Yes you will panic because you know if SAA and Russia attacks your ass you will be gone forever.

Offer this HTS warlord a death of thousand cuts.

Michal, too much work and value on a thousand of cuts

Eat raw, Mr Santos! A six month old baby would be able to correct my Spanish!

So Turkey abandon Idlib? I guess Russia gave them assurances regarding the Kurds. What will the US-led coalition do now?

Go home, but not really now, next,

The US forces will be kicked out if they do not leave Syria. Time is up for the exceptionally meddlesome US.

They are already being kicked out for a long time, more or less three years, what only is approaching it’s the decisive kick, the conclusion of an syllogism.

Detail: for anglosaxons and takfiris. logic it’s enough, no need of Hegel-

“The Mujahedeen are in their strongest physical and moral status”

While under that same table he has his suitcases packed and ready to leave immediately….

Suitcases packet and ready to leave immediately in his burka.

Wrong! Just imagine the creep without a beard and wearing a White Helmet. I am sure he will find a good home in the slave Canada, Germany, UK, but mysteriously banned in the US.

The US/NATO 60 countries Inherent Resolve Freedom Coalition will come to HT Al-Sham´s resque immediately if Lavrov and Assad dare to attack Idlib. SAA and Russian Special Forces will be hunted down as dogs by American, British and French forces if they step on the red line and hurt our Western assets in Idlib ………………………………..LOL.

By “Western assets” you mean Al-Queda and IS in Idlib, don’t you? You don’t mean Trump’s or Mattis’s crown jewels, do you? So, how does it feel to be protecting the murderers of 3000 on 9/11? I am really disgusted and appalled. This is why “superior and civilised” US/EU/NATO/GCC/Israeli gangsters are rotting from the inside. No moral compass or loyalty except to money and power.

Gosh no need for a body language course to interpret this guys emotions. Knit brow, bulgy eyes, yeah don’t think, sorry about that, is gonna assuage his debt to humanity. He’s got that dead man walking look.

Too much Captagon I would think :)

Guess what goatf**ker you probably now have Spetsnaz Alpha team or similar looking for you right now I really hope they find you and your friends!

Even the Spetsnaz Z team as more to do.

Its about time to see the true face of Turkey In this short of alliance with Russia and Iran. Kavusoglou was trying to differentiate from Lavrov as of the definition of terrorists in their join press conference.

Lavrov knows what they are up to. Putin knew all along. You can’t trust someone that turned on you. So they did the next best thing…they led Erdo down the garden path..let him believe he was forgiven, we trust you, blah,blah. Erdo thought he could bamboozle Lavrov, but found that he just screwed himself. Now he has Turkey in a very unenviable position. The US twisting his arm on one side, the Russians being his buds on the other, as long as he plays nice, that is. He already found out what Russia could and would do to his little empire. His terrorists will get the same fate here as they did down south and there is $hit Erdo can do about it. As soon as Cavusoglu tried his BS, Lavrov shut him down. HTS…bend over and kiss your a$$ goodbye… you’re dead meat.

the danger lies in the turkish bastards…..never trust a jew slave…

Easy on that pot…

Blackbeard you will be buratined, Puff… only steam.

” the liberation of Damascus and beyond,” This is what people who live in an other dimension sound like…

Same as the US originally then ?……deluded.

Boy, that’s a ‘deer in the headlights’ look if ever I saw one. I wonder if there’s a puddle on the floor?

Could be the effects of crystal meths from the US.

Looks more like he’s been cut off from his meth.

This creep is due his 80 virgins soon? Fear not, Drs Putin and Shoigu will soon oblige!

He’s got that banned from evacuation look. Bury him to the neck and leave him to the insects.

Your screen name is the definition of irony! I think adding an unlimited supply of water might make it more, appropriate.

Well said! Wish I had 5 bucks for ever chopper who climbed the fence after Abu’s pep talk.

I wonder how many heads that scumbag zionist rat has chopped off,and how many women he raped??.I hope they capture this lunatic alive,and see what he has to say then.

cockroach pissing out of fear