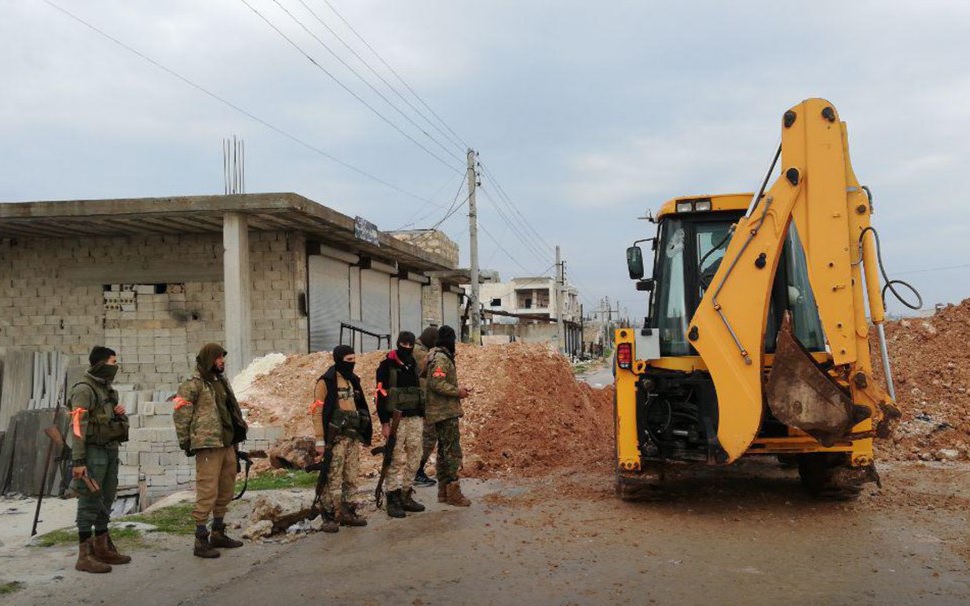 HTS fighters at the entrance of the town of A’wejel

Hay’at Tahrir al-Sham (HTS) has closed all roads linking its areas in the Idlib de-escalation zone with the Turkish-occupied area of Afrin, the Syrian news outlet, Enab Baladi, reported on January 30.

The two main closed roads are Atme-Deir Ballut and Deir Samaan-al-Ghazzawiyya. Civilians use these roads on a daily basis for transportation and shipping.

“There is no open road between Afrin and the western countryside [of Aleppo], hundreds of cars have been stopped there since yesterday,” the outlet’s report said.

The closure of the roads was not a surprise at all. Two days ago, HTS closed all the crossing with Afrin. A security commander in the group justified the step by claiming that ISIS fighters, who are escaping from the middle Euphrates River Valley, are trying to reach HTS’ areas in the governorate of Idlib. 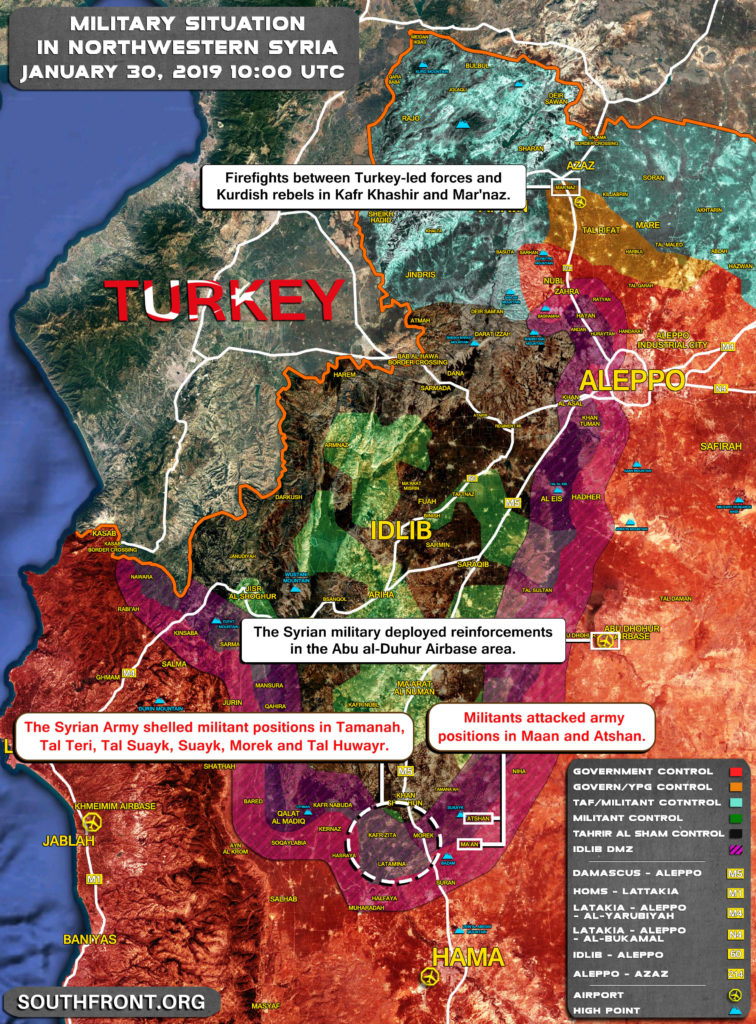 “According to information, which we received from several sources, many groups of the Islamic State are heading towards Idlib from the Syrian Democratic Forces (SDF) and the Olive Branch areas,” al-Saleh told HTS’s news network, Iba’a.

ISIS cells carried out a series of attacks on HTS in Idlib during the last few weeks. In the most recent attack, a female suicide bomber blew herself up outside the headquarters of HTS’s Salvation Government in the city of Idlib killing at least two militants.

HTS is not only trying to prevent ISIS fighters from reaching Idlib, but also to counter the Turkish influence in its areas, according to local observers, who believe that these attempts will likely fail.

blah blah ISIS blah blah. Might as well ignore or discount any sentence with ISIS in it

It seems that HTS is really in charge for the moment, if only by a narrow margin.

As though there’s any kind of ideological difference between HTS and ISIS and as though HTS wouldn’t just recruit any ISIS who wants to join.

To the casual outsider there are no differences. To fellow Jihadists the minutest of details are cause for greater hatred and violence then against what should logically be the common foe. Did anyone not a communist really care at the time about the differences in Trotsky’s version of communism or Stalin’s? Yet Stalin killed or sent millions to Siberia for being socalled Trotskists.

They are both offshoots of Islamic State in Iraq, which is in turn the successor to Al Qaeda in Iraq. The only difference between them is over jurisdiction (al Qaeda head office ordered ISIS to stick to Iraq and leave Syria to al Nusra, which now calls itself HTS; ISIS refused). It was ISIS which had set up al Nusra as its Syria franchise in the first place before the jurisdiction dispute arose.

The differences between Stalin and Trotsky were over the fundamental direction of the Soviet state and the October Revolution. ISIS and HTS have nothing like that between them at all.

good point. But then again, shit is shit, so who cares to separate the kind of shit they are?

It matters to shit. That’s all the reason they need.

Be glad that it matters to them, it keeps them off the street and out of our way. Once the infighting stops, that’s when we should get worried, because that usually means one group has won and there’s nothing distracting it any more to make us its target again.

Friend I never been a target even to the ones who had the illusion I am their target they soon found out soonest they express themselves that they are the target as I am a hunter and always have been and will be.

But I do agree with the logic you present me with. It is good watching your enemies killing each other or destroying each other as long you dont remain idle and help them along the way to do a better job.

As if Turkey doesn’t want the border crossings closed, LOL, the Turks want them closed more than HTS does, after the Turks turn on HTS and start killing them, they don’t want any of them escaping across the Turkish border, they want them trapped exactly where they are. Who out there really falls for this invincible HTS BS, they can’t do anything at all but scratch their own backsides, but we’re all told they’re kicking the Turks and their proxies out of Idlib, and closing the borders too, what a joke, they must think we’re all as dumb as monkeys. Any HTS fighters who manage to escape the upcoming Russian/Syrian/Turkish annihilation of their group will join Isis, that’s what will happen. The only difference between Isis and HTS is this, HTS like the Saudi regime and thinks it does a good job, Isis on the other hand says their not strict enough and wants to replace them, and since HTS no longer gets support from the Saudis [the Arab league are forbidding them], they may as well all just join Isis anyway, as a matter of fact it wouldn’t surprise me if they suddenly announced it themselves in the near future. A bloodbath is coming for HTS, courtesy of the Russians/Syrians/Turks.